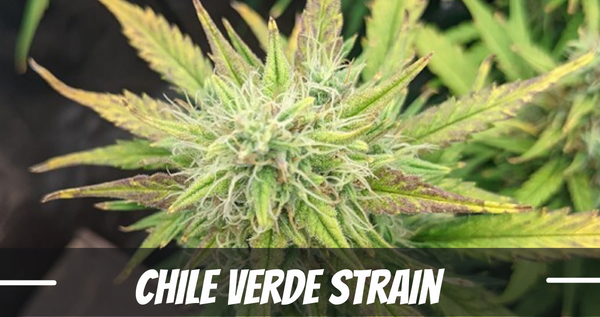 Chile Verde strain may be fairly new on the block, but that hasn’t stopped it from carving out quite a reputation.

Created by HBK genetics, Chile Verde quickly grew in popularity after its release, and for good reason.

This Lavender Kush and Key Lime Pie offspring hit the genetic jackpot, with heavy hitters like Girl Scout Cookies, Afghani, and Skunk #1 in its lineage.

Chile Verde strain genetics include a diverse and unique terpene profile of Caryophyllene, Humulene, Limonene, Myrcene, and Alpha-Bisabolol, delivering an unmistakable flavor and fragrance that makes it stand out from the rest.

Its plant has a sturdy, indica-typical structure with soft purples among an array of lime, emerald, and forest greens and a coating of crystalline trichomes.

The Chile Verde weed strain price may be higher than most, but why shouldn’t it be?

Everything about this strain will entice any smoker to roll one up and give it a shot.

Be sure not to mistake it for its variation strain, Chile Verde OG, which includes OG Kush within its lineage.

Chile Verde strain info is limited, but word on the street is that it produces moderate to heavy yields.

You can grow Chile Verde strain outdoors, indoors, and in a greenhouse, finding success with either set-up.

Although much of it comes down to your expertise, even newbies can achieve those higher yields with the proper growth strategies.

The Chile Verde THC percentage can range from a mild 15% to a whopping 25%.

One factor influencing final THC content is how you cultivate the strain.

Much of the final result depends on the grower’s expertise, with a correlation between the amount of care and attention the plants receive and the amount of THC they yield.

If you’re a beginner smoker, you may want to take it slow in case you’ve gotten a strong batch.

And don’t consume this one as edibles. Stick to vaping and smoking until you’ve familiarized yourself with the strain.

Chile Verde strain is not sativa or indica in effects – it’s well-balanced to suit its hybrid nature.

Whether you’re struggling to get those creative juices flowing or simply lacking focus and motivation, this is the muse to get you going.

It helps with pain, seizures, muscle spasms, cramps, headaches, anxiety, and stress, making it a prime pick if cannabis is your remedy of choice.

Everyone loves a stinky strain – the kind that has you opening jars for friends in anticipation just to see their strank-face when you crack that lid under their noses.

It’s got a pungent, skunky vibe, exuding strong scents of lime and lavender amalgamated with pepper and spice and just a hint of diesel.

It owes this captivating fragrance to its terpene profile of Caryophyllene (pepper), Humulene (hoppy), Limonene (citrus), Myrcene (herbs and earth), and Bisabolol (florals and apple).

Surprisingly Chile Verde strain isn’t quite as aromatic on the tree as it is after curing it, but it still has a refreshing scent to enjoy.

Like its fragrance, Chile Verde strains genetics create a taste layered with flavors and bursting with zest and spice.

Between Key Lime Pie strain, Lavender strain, and its terpenes, Chile Verde strain inherited all its needs to deliver an enjoyable smoking experience from the moment you light up.

Rounding off the taste sensation is a light floral sweetness, and hints of fuel on the exhale, tempting you to take one more toke.

There’s not much bad publicity for Chile Verde strain. From our experience, there was little more than the regular cotton-mouth, munchies, and some dizziness.

Having a beverage in reach is a given, as most strains will make you thirsty. And let’s be honest – snacks taste best when you devour them in a munchie-fuelled frenzy.

For the most part, Chile Verde strain is not sativa or indica in effects, but that all changes when you take too much.

If you overindulge, you may experience mild sedation, drowsiness, or full-blown couchlock.

When comparing Chile Verde strain prices, check the THC content with your supplier to avoid accidentally taking in more than you can handle.

If you’ve had any bad experiences, scroll to the end of this Chile Verde strain review and drop us a comment.

Chile Verde strain seeds are available, though they may be challenging to find. And when you do, they’ll come at a price.

Plus, Chile Verde cannabis strain info is still relatively new, and most growing info is hearsay or based on what we know about its parents.

Most growers are hesitant to purchase seeds when clones are a cheaper alternative.

The Chile Verde pot strain plant is an estimated 18inches (or 1.5ft) tall with a sturdy, broad structure. It prefers warm temperatures averaging 80°F-90°F and generous amounts of water.

You want to keep the humidity down, though, and keep a close eye out for mildew or bud-rot.

It responds well to trellising, and pruning is another excellent technique to help increase light exposure and improve ventilation.

It won the Emerald cup award for best outdoor grow, so growing Chile Verde marijuana strain outdoors is a great choice – if you have the skills.

If not, it’s highly recommended you use indoor or greenhouse setups instead, as you’ll be able to control conditions more accurately.

My free grow bible will help ensure you know everything you need.

With much of the growing process still shrouded in mystery, this new strain still has much to teach.

With its parent strains having a flowering time of around 9 – 10 weeks, we can expect the Chile Verde strain to have a similar flowering time.

With such distinct flavors in Chile Verde strains genetics, you could easily pick its parents out in a lineup.

It clearly gets its feistiness from the Lavender strain, contributing to that spicy flavor and aroma.

But its racy head-high to body-calm effects and sweet citrus flavor could only have been inherited from the Key Lime Pie strain.

The combination of these two has resulted in an original strain you don’t want to miss out on.

Chile Verde strain is a hybrid that leans mostly to the indica side, with a 70% – 30% Indica to Sativa ratio. However, its effects are well balanced. When it comes to growing, it shows sativa traits such as being able to withstand high temperatures.

No, it will only burn your mouth if you eat a lit joint. Its name may mean “green chili,” but Chile Verde strain most likely got its moniker from the spiciness caused by the Caryophyllene terpene within its flavor, which gives it that spicy, peppery flavor and fragrance.