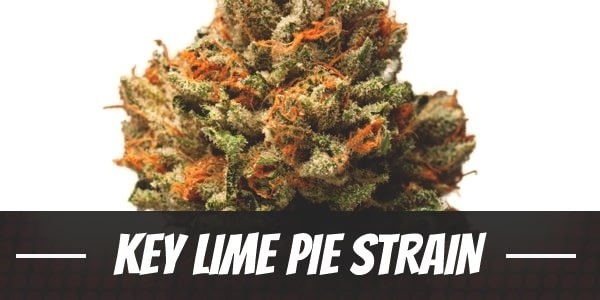 Because of the recent hike in the popularity of Cannabis, breeders have made it a point to create their versions of classic or famous marijuana strains. However, not all strains were a result of crossbreeding. For instance, Key Lime Pie from Burning Bush Nurseries is a unique phenotype of Girl Scout Cookies (GSC).

GSC, itself, is a highly-acclaimed strain notable for its euphoric mental effects and deep body relaxation. It has also produced several phenotypes, of which some have went on to become as famous and widely accepted. Besides Key Lime Pie, the others include Thin Mint and Platinum Cookies.

Key Lime Pie is a very potent strain. As such, users should never underestimate it. Most especially, beginners in using marijuana should start off with only a tiny amount before gradually adding a tad bit more in future sessions.

Key Lime Pie is a rapid-acting strain, and its effects are often felt immediately after inhalation. It starts off with a euphoric high the invades the mind and the body. Usually, it results in mental clarity and sharper focus. It inspires creative thoughts and motivates users to stay productive. All this time, a mild tingling sensation continues to ebb through the body.

As body relaxation starts to set in, the strain makes the users feel uplifted. The beauty of Key Lime Pie is that it does not overwhelm users if used in moderation. Once the full Indica traits manifest, it leaves people in a dreamy high as opposed to a confused state.

As mentioned, it is very potent. As such, people who use a little bit too much are likely to feel extremely lazy. In other words, it can result in a couch-lock.

A big reason why it was named as Key Lime Pie is due to its lime flavors with a citrusy note. Upon exhale, it leaves an earthy and sweet aftertaste.

Having cottonmouth and dry eyes are the two most common adverse effects of using Key Lime Pie. It is not any different from other strains, though. Furthermore, it may also cause a bit of a headache.

In extreme cases such as when one end up using too much, then it is possible that some may feel a little bit anxious or paranoid.

Like many others, Key Lime Pie offers a plethora of benefits to recreational users. At the same time, these same traits also have value for people suffering from various ailments. While its CBD content is a little bit above average, it not anywhere near becoming useful for people with epilepsy.

As the strain induces mental euphoria, most people use it for de-stressing. In enhancing the mood, it helps people get out of the funk and stay cheerful. As such, people with are likely to appreciate the reprieve from ill thoughts and feelings.

Once the full effects of Key Lime Pie set in, the deep relaxation it induces is as much a result of its ability to soothe aching muscles. In that way, it can help provide comfort to people with chronic pains.

Later, most users tend to feel drowsy. Hence, the best time to use Key Lime Pie is in late in the afternoon. While initially, it allows people to be productive, the tail end of its effects is conducive to sleeping. For medical patients needing rest, and insomniacs, this strain might help in getting the elusive quality sleep.

Key Lime Pie is not an easy-to-grow hybrid. While it does not mean that beginners will never be able to cultivate it successfully, it is under the care of experienced growers that ensures the plant reaches its full potential. Nonetheless, another hindrance to growing it is that its seeds are not available. About the only way to cultivate it for personal use is if one could obtain a clipping for cloning.

At any rate, this plant thrives in both indoors and outdoors. Regardless of its environment, one of the things growers need to do is to top it early. This way, it can grow bushier with numerous lateral branches. Its buds are small to medium in size and dense. These bright green nugget-shaped buds are also covered heavily with frosty crystals.

Key Lime Pie is one of the most beautiful marijuana plants one can set eyes on. To further enhance its appearance with a purple hue, growers should place it in a colder temperature (by some 10 degrees) before flowering. It triggers a process that results in purple colors appearing on its flowers.

Growers can choose to use soil for better flavors or hydroponics for explosive growth. Either way, Key Lime Pie should have no trouble growing inside the house. It has a flowering period of 9 to 10 weeks. Although it is a little longer than typical Indica, the reward, in the end, is a decent yield of 10 to 12 ounces of buds.

The plant starts flowering during the first days of October. Ideally, it should be in a climate that is similar to the Mediterranean. During harvest, it should produce at least 12 ounces of buds or more per plant.

Have you ever smoked or grown your own Key Lime Pie? Please let me know what you think about this marijuana strain in the comments below.