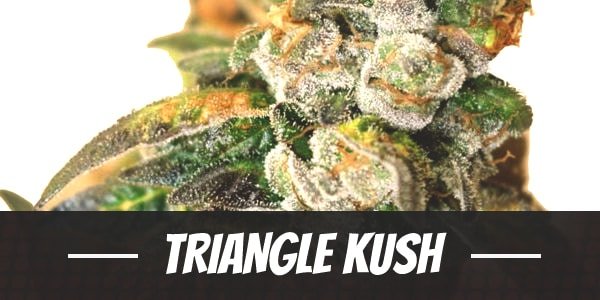 In Florida, the recreational use of marijuana remains illegal. Still, three of its cities – Miami, Jacksonville, and Tampa – supply the sunshine state.

These areas are second in line to the Emerald Triangle in comprising the list of most notable triumvirates in the global marijuana industry.

Not surprisingly, it is also where Triangle Kush derived its name.

It is unclear which strains THC Design used to create Triple Kush. But, the consensus is that it is a descendant of Florida’s version of OG Kush.

An American classic, this Indica dominant marijuana is known for its profound relaxing effects.

Triangle Kush, like its predecessor, has potent psychoactive effects that help users relax.

It also comes with an uplifting and stimulating high despite being a mostly Indica strain.

With up to 26% THC, Triangle Kush is an extremely potent strain. Because of this, it may overwhelm beginners and even veterans.

However, if taken in moderate amounts, this ganja can be the perfect companion to an afternoon of stimulating and relaxing fun.

Beginning from the temple and slowly spreading to the body, this strain induces a euphoric head high.

While it is profound, it is also gentle at the same time. It inspires positivity and as a result, leaves users feeling uplifted and happier.

It follows too that with a cheerful mood, most people typically feel sociable and may engage in delightfully healthy conversations.

Often, during the early stage of its effects, most users tend to have a clear head. Some people may even feel creative.

In time, though, the Indica traits creep into the body. Once it does, it complements the mental high by ushering in a soothing sensation.

In most cases, the body effects of the strain can overwhelm the body.

Triangle Kush, in other words, will likely leave users in a couch-lock. In this nirvana-like state, most users eventually get drowsy and end up falling asleep.

Reminiscent of other Kush strains, it has an overpowering scent of sour lemon and earth with floral undertones.

It also comes with a hint of pine and fuel with a spicy note.

Triangle Kush tastes as earthy and lemony as its scent. The contrast between sweet and sour citrusy notes add a character to its flavors. It also leaves a spicy and woody aftertaste.

Two of the most common reactions to smoking marijuana is dry mouth and eyes. However, they are both often ignored due to their mildness. Furthermore, it may also cause headaches.

It must be noted that Triangle Kush does tend to cause a small degree of paranoia and anxiety.

In which case, the cause may be attributed to the amount of herb smoked or to a user’s low THC tolerance. Thus, it is best to use cannabis in moderation.

At only 0.2%, this herb does not offer an extensive portfolio of medical benefits. However, medical users find that the strain’s value lies in its psychoactive properties.

Its elating mental high is perfect for keeping depressive moods at bay.

Because of this, users who suffer from depression can find comfort in its use. Not only that, Triangle Kush is known to help boost both mood and morale thus making it a useful stress reliever.

From its Indica lineage, the herb inherited a sedating body high that makes for great pain and headache reliever.

Such traits also help with insomnia and other sleeping problems.

Being Indica dominant, Triangle Kush can easily withstand changes in weather. Despite its sturdiness, however, it is not beginner friendly. As a clone-only strain, it may prove impossible for many to obtain a clipping.

Grown indoors, Triangle Kush involves some meticulous upkeep. The indoor environment, for example, must be moderately hot and CO2 rich.

However, temperatures should not exceed 88 degrees Fahrenheit. Its soil must have a pH level between 5.8 and 6.0. Not only that, but the plant must also be topped early otherwise it can grow too tall.

And, once the flowering period of 10 weeks has passed, growers can expect a yield of up to 10 ounces of buds per square meter.

But, more than that, it is owning such an amazing strain that makes growing it better.

In contrast, growing Triangle Kush outdoors is a little less painstaking. Like many others, this cannabis strain thrives in a warm and dry climate.

Usually, it flowers around the second or third week of October and can produce 10 to 12 ounces of buds per plant.

Have you ever smoked or grown your own Triangle Kush?