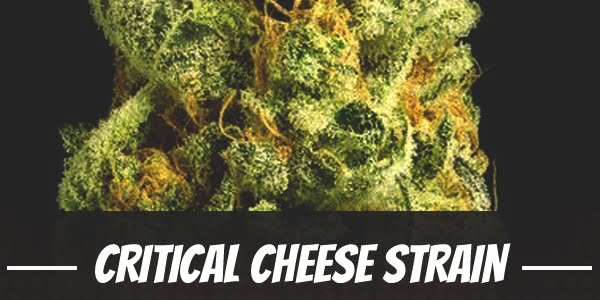 Few strains in the world are as renowned as the Afghani landrace and Skunk. Hence, when one contains the genes of these two, nothing short of spectacular is delivered.

For decades, Cheese is among the most recognized hybrids. Not only does it possess exceptional effects, but it also has a distinct smell and sharp taste of cheese. Its origin, though, remains a mystery. However, most people accept it to be a descendant of a phenotype of Skunk No. 1. While it was already exceptional, Big Buddha Seeds decided to improve its potency by introducing Afghani to its genetics.

A true classic, Cheese could be further improved. At least, the was the goal when Dinafem Seeds began to work on a new hybrid. So, they crossed Cheese with another notable strain, Critical Plus. It resulted in the birth of Critical Cheese. In essence, it is the enhanced version of Cheese with a much higher yield.

Critical Cheese leans towards the Sativa side. A fact that is felt soon after the first toke. It does not take too long before it sends a euphoric buzz to the head. Not only that, but it also delivers an energetic boost. In some ways, one can find a good use for it as a wake-and-bake strain. In no time at all, users find themselves mentally refreshed and reinvigorated.

At the same time, Critical Cheese enhances the mood of users. It results in a general sense of well-being and happiness. Users often feel motivated and inspired to be productive. Best of all, accomplishing tasks feels like a breeze.

In due time, a slight tingling buzz from the back of the neck may manifest. As it trickles to the body, it ushers in a wave of soothing sensation. The strain, used in moderation, is not likely to leave users spacey or locked on the couch.

In reality, most people are going to end up with much more pronounced effects. It is very potent and difficult to judge how much one must use especially if trying it out for the first time. In this case, users are likely to fall into a state of deep introspection once the full Indica effects creep into the body. For others, it may result in a foggy mind. At any rate, it is not likely to lead to a mind-bending intense buzzing high.

Critical Cheese smells exactly like its predecessor. Boasting of the taste of sharp cheese mixed with earth, it also comes with a minty and lemony undertone.

It smells like one; it certainly tastes like one too. Critical Cheese is a concoction of flavors. Blending in with its cheesy taste, it also lemony and leaves a woody aftertaste.

In using Critical Cheese, it is certain that users will have dry eyes. It can also be followed by dry mouth. Both these conditions are not troublesome though.

Of note is that it can cause a few people to feel either slightly more anxious or paranoid. Hence, those who are predisposed to these conditions should use it within limits.

One notable benefit of using Critical Cheese is its ability to boost energy levels. As such, it helps people ward off fatigue. At least, that is what it can do during the early stages. However, as the Indica traits take over the body, it helps users cool down and relax. Extreme fatigue can knock out people. But with this strain, it eases users into resting.

As it induces deep relaxation, another way it can help is relief from stress. Even people with depression should find their condition manageable.

Although Critical Cheese may appear to be an Indica plant with its elongated leaves, it can grow up to 8 feet tall. Outdoors, this is not so much of a concern. However, it can be problematic when grown indoors.

Sour Cheese is a descendant of a mix of Cheese and Diesel, and is a strain that represents its parental effects very well. Read our full review!

Topping it is necessary to keep it short and encourage more outward growth. The plant produces dense grape-shaped light green nugs covered in amber hairs. Its Afghani heritage is evident with its thick coating of crystal trichomes.

The bloom stage indoors is quite fast at only 8 to 9 weeks. Planting it indoors is also preferred by most growers for one distinct advantage – that is to install a carbon odor filter. It is the only way to guarantee privacy in case its pungent scent can be a problem outdoors. To improve its yield, one thing growers can do is to use the Sea of Green or Screen of Green training method. Once ready for harvest, it can produce up to 21 ounces of buds per square meter.

When cultivated in the garden or the backyard, Critical Cheese should begin to flower by the end of September. Each plant can produce between 24 to 35 ounces.

FAQ About the Critical Cheese Strain

What are the origins of the Critical Cheese strain?

Have you ever smoked or grown your own Critical Cheese? Please let me know what you think about this marijuana strain in the comments below.