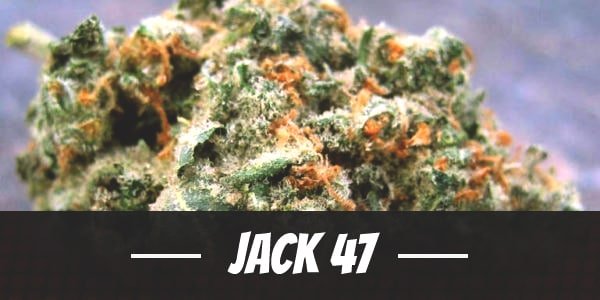 What happens when two of the most potent genetics meet? Jack 47 is what happens, a super hybrid famed for its powerful effects and vigorous production.

From its name alone, cannabis connoisseurs should probably be able to pick up on its iconic predecessor, Jack Herer. After all, it is named after one of the most renowned marijuana activists in history. Well-loved for its Sativa effects, it has inspired and cheered up a great number of users all over the world.

In developing this super hybrid, Sweet Seeds also used AK-47. Boasting a diverse lineage, this plant has indigenous Colombian, Mexican, Afghan, and Thai varieties in its roots. With its au naturel heritage, nothing short of exceptional is provided by this extremely strong smoke.

As its offspring, Jack 47 inherited both Sativa strains’ traits and rose to an equally, if not more, distinguished standing.

As the celebrity child of two celebrated herbs, Jack 47 is nothing but phenomenal. Being extremely potent, it boasts of having up to 24% THC. Although its hard-hitting effects may seem too much, novices can enjoy this strain by avoiding copious amounts.

At the start, it sends a strong euphoric buzz into the mind almost instantaneously. As a sense of happiness set in, users find themselves in good spirits feeling cheerful and sociable. Often, this leads to a bout of laughter as dialogues take an amusing turn.

Users, energized by Jack 47, are likely to find themselves breezing through difficult tasks with relative ease. Moreover, it can stimulate creative thoughts which are great for artistic pursuits.

Accompanying the mental euphoria is a relaxing buzz that unloads any unwanted burden. Eased from feelings of heaviness, users feel lighter and much more relaxed.

Jack 47 has a pungent citrus scent of lemon but with earthy undertones of herb that is reminiscent of Pine-Sol.

Fragrances essentially foretell a strain’s flavors. Thus, in Jack 47’s case, it has the undeniable tang of lemon mixed with lime. To balance out the zing, the citrus flavor is accompanied by a tinge of honey. On the exhale, it is spicy and has a slight chemical hint.

Most users typically experience cottonmouth when it comes to smoking Jack 47, or any strain for that matter. Some, to a lesser degree, may also experience dry eyes. Both of these are mild, but that is largely dependent on the amount of herb consumed.

However, a Sativa as potent as Jack 47 is likely to cause some people to feel anxious or even a little paranoid. Thus, as a rule, marijuana must always be used in moderation.

Test data for Jack 47’s cannabinoid content shows that it only contains up to 2% CBD. While this may be better than most plants, it remains far too low to be of any significance to a person with epilepsy or those who are prone to seizures. In spite of this, the herb remains medically beneficial in other ways through its psychoactive properties.

The psychedelic experience that Jack 47 delivers is often enough to lift spirits. By enhancing the mood, it boosts the morale of those in sunken states of gloom such as people diagnosed with depression. Not only that, but it also wipes out stress-related problems.

Besides the behavioral changes, Jack 47 also helps alleviate chronic physiological pain. An effective analgesic, it eases pressure to every nook and cranny of the body beginning from the temples. Moreover, its energizing high supplements the body in warding off fatigue.

During the comedown, many often feel the urge to eat. This, however, is not surprising as the chemical compounds responsible for the high are also appetite stimulants. Used in this way, users must control the amount of cannabis taken. Otherwise, they may find it difficult to get off the couch.

A vigorous producer, Jack 47 has become one of the most sought-after strains. Although a Sativa dominant strain, its structure is more like an Indica. Thus, the herb is sturdy and able to withstand abrupt changes in weather conditions. Furthermore, as a result of its genetic freshness, it can adapt to every kind of growing technique in the cannabis industry. For this reason, beginners are drawn to cultivating the plant.

The indoor flowering time for Jack 47 is 9 to 10 weeks. This may seem longer than usual, but it is quite typical of Sativa dominant hybrids. Once it is ready for harvest, this herb produces a massive yield of up to 22 ounces of buds per square meter.

Jack 47 usually flowers by the last week of October. But, when exposed to warm temperatures, it can flower as early as the second or third week. Like others, it thrives best when it cultivated adequately with the right amount of care. During harvest time, growers can expect it to yield more than 20 ounces of buds per plant.

Have you ever smoked or grown your own Jack 47? Please let me know what you think about this marijuana strain in the comments below.