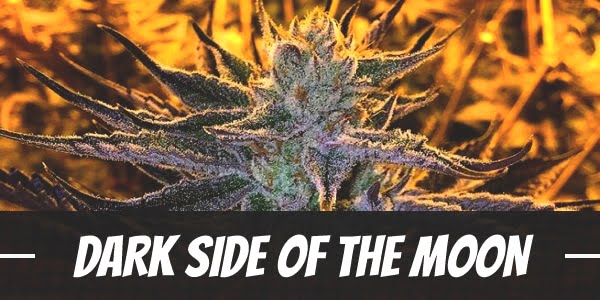 In 1973, Pink Floyd releases its eighth studio album ‘Dark Side of the Moon.’ Immediately, it became such a hit among the masses that it even spent 741 weeks on the album chart.

It is among the most celebrated LP records in the history of rock music for its unique track-by-track approach.

Information about Dark Side of the Moon:

An Indica-dominant strain of the same name exists in the cannabis industry.

And, like how the individual songs combine to create the essence of the album, Dark Side of the Moon has unique components that have turned it into a standout.

A glimpse of the strain, for example, is almost like looking at the night sky. Its frosty trichomes shine like starts against the dark backdrop of purple leaves.

Supplementing its beauty is its mellow cerebral high and heavy-hitting body high which come from its parents, Spirit in the Sky and a backcross of Green Ribbon.

Users should note there is another strain with the same name from Bodhi High.

One big difference between Exotic Genetix’s Dark Side of the Moon is that the former is a pure Indica while the latter features 30% Sativa heritage.

Typical of Indica-leaning strains, Dark Side of the Moon is a slow starter. In fact, its onset does not start until 15 to 20 minutes after the first two to three puffs.

As such, it is important to pace the bud as its potent levels of 19% THC can be overwhelming when used excessively.

TIP: Looking to buy Dark Side of the Moon seeds? Check out this marijuana seed shop

During the initial onset, a euphoric sensation spreads throughout the mind. And, almost immediately after it sets, it enhances the mood and uplifts spirits.

Users radiate with a happiness that can only come from within. Many even find themselves smiling for the simplest of reasons.

After about an hour or two, a light pressure builds up in the temples and gradually ebbs down. It soothes each muscle in waves to free the body of tension.

Enveloping the body in relaxation is a soothing heaviness that eventually immobilizes users. In all likelihood, it will only be a matter of time before one is anchored to the couch and fall asleep.

Unarguably, the best time to use Dark Side of the Moon is at night or on a lazy day. Using the Indica-dominant bud in the morning or early afternoon might keep users from being productive.

Dark Side of the Moon has a sweet and fruity fragrance profile. A whiff of the bud reveals its subtle undertones of ripe berries, particularly that of blueberry. Broken apart or combusted, it fills the room with the aroma of wet soil.

Bursting in the palate at the first puff of Dark Side of the Moon is the sweet taste of blueberries. Blending with the berry overtones is a tinge of hash. On the exhale, the bud leaves an aftertaste of earth.

Cannabis always interferes with the production of saliva. As such, a cottonmouth should come as no surprise. Some users will also experience red eyes as cannabinoids inhibit moisture from the tear ducts.

Though barely noticeable, the mild dehydration can be quite dizzying for some. For this reason, it is best to stay hydrated throughout the high by downing a few glasses of water.

Some users may also feel a little paranoid or anxious while using Dark Side of the Mood.

Thankfully, this is a rare occurrence that is usually triggered by overconsumption but it can also be affected by an uneasy disposition before the high. Pacing and moderation, however, will keep such effects at bay.

Presumably, Dark Side of the Moon was created for the recreational community.

Still, the combined effects of its THC, CBD, and cannabinoids like terpenes are enough to appease symptoms of various afflictions. And so, it retains enough benefits to be of therapeutic value to medical users.

TIP: Looking to buy Dark Side of the Moon seeds? Check out this marijuana seed shop

Among Dark Side of the Moon’s best uses is as a painkiller. The analgesic properties of its THC levels soothe various aches and pains including those caused by inflamed muscles. At the same time, it reduces swelling and redness.

Apart from the physical, Dark Side of the Moon also has positive effects on the mind. Its mood enhancing properties clears the mind of negativity and worry as well as the daily hassles of stress.

And, albeit temporary, it provides comfort to patients going through depression or mental health issues with similar symptoms such as PTSD.

Sleep is among the most important components of the healing process.

Through Dark Side of the Moon’s relaxing effects, drowsiness sets faster. Not only that, it enhances both the quality and quantity of sleep.

Dark Side of the Moon has a typical Indica-dominant shape. It is hardy and highly resistant against moisture and strong gusts of wind. Normally, it does need to be topped early.

However, those with limited spaces may need to shorten the vegetative period to keep it from growing too tall. For this reason, it can be cultivated in farms, gardens, greenhouses, and indoor tents.

As alluded to earlier, Dark Side of the Moon is an absolutely attractive plant. To produce its purple hues, it must be exposed to cooler temperatures during the flowering stage.

Outdoor growers from regions in the northern hemisphere should plant the herb a bit later so it flowers just in time as the weather changes.

Those looking to develop its terpenes further may want to use soil.

However, those wanting to harvest the bud earlier may cultivate it in hydroponic systems. The Indica-dominant herb performs well when the Sea of Green method is applied.

Dark Side of the Moon has an indoor flowering period of 7 to 9 weeks. Once mature, growers can harvest between 10 to 12 ounces of buds per square meter. Under the expert care of a grower, it yields more and blossoms faster as well.

Ironically, it is a warm, semi humid climate, along with constant sunshine, brings out the best in Dark Side of the Moon. In such environments, the strain flowers from the last week of September to the second or third week of October with each plant producing at least 12 ounces of buds.

Have you ever smoked or grown your own Dark Side of the Moon? Please let me know what you think about this marijuana strain in the comments below.

Dark Side of the Moon Strain Review

0 comments on “Dark Side of the Moon Strain”