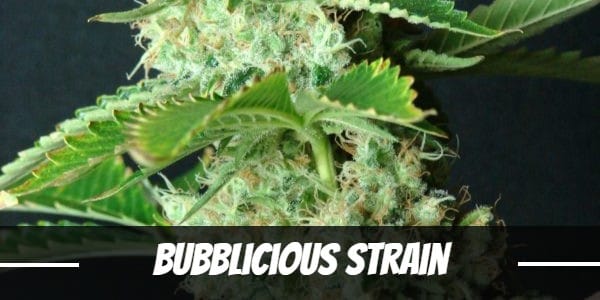 Bubble Gum is among the most famous strains in the cannabis industry. In fact, it is even considered a classic by many long-time enthusiasts and has garnered numerous awards for its one-of-a-kind candy flavors and uplifting head high.

In honor of the legendary strain, Nirvana Seeds developed Bubblicious during the 1990s. It boasts the same delicious bubblegum flavor but with a body buzz that soothes the muscles through and through. Not only that, its small buds are distinguished by its pink and purple tints that make its name even more fitting.

Bubblicious has an interesting onset. It is quick like a Sativa however, it does not startle the mind with an intense cerebral buzz. Instead, the Indica-dominant bud delivers a deeply relaxing high that clears away tension in the mind and the body.

For casual users, the mental clarity has an almost immediate impact on one’s productivity. Not negatively, of course. Rather, it sparks a sense of creativity and enables thoughts to flow and form freely. And, along with improved motivation, users work on tasks tirelessly for longer periods of time.

However, those without projects to worry about may use the strain as a confidence boost. Users smile from ear to ear and radiate with a happiness from within. Some may even use the profound ideas as context for an interesting conversation.

After about an hour or two, the same soothing buzz from the onset intensifies. Planting itself in the limbs is a heaviness that, though intense, does not overpower the initial mental effects. In excess, however, it can stun one with an overwhelming psychedelic high and even anchor users to their couches.

Because of its great wake-and-bake qualities, users may use in the mornings or afternoons to jumpstart the mind. However, dosage must always be kept in mind as its up to 25% THC can alter the trajectory of one’s day.

Bubblicious has a strong fruity fragrance reminiscent of blueberry bubblegum. It is sweet but sour with subtle citric notes that intensify once the bud is broken apart. Combusting it, however, reveals its earthy undertones.

Drawn in, Bubblicious floods the palate with a medley of sweet berries and citrus. Particularly overpowering is its overtone of blueberries which, during the first puff, outshines the bud’s earthiness. On the exhale, a skunky aftertaste lingers in the mouth.

The cannabinoids in marijuana usually interferes with the body’s ability to produce moisture. As such, it is not uncommon for some users to experience symptoms of dry eyes and a cottonmouth while using Bubblicious or any strain for that matter. Both are mild but can be easily appeased by downing a few glasses of water in case discomfort arises.

Apart from the unavoidable dry spell, some of the side effects of Bubblicious include greening out which is a combination of headaches and anxiety. Though rare, the heightened sensations can also cause users to feel a little paranoid. For this reason, users must pace and moderate one’s consumption of marijuana.

Presumably, Bubblicious was created for recreational purposes. After all, that has been the public’s perception of marijuana since time immemorial. Still, the bud has therapeutic potential. It provides a reprieve for patients suffering from a variety of mental and physical afflictions.

Looking to buy seeds like Bubblicious? Check out our marijuana seed bank.

Its happy high, for example, enhances the mood and rids the mind of negativity. As such, it can be used as an anti-depressant which temporarily appeases symptoms of depression such as increased anxiousness which are also present in people with chronic stress.

Meanwhile, its relaxing body high relieves various types of aches and pains including those caused by sudden muscular contractions. The same soothing buzz also eases nausea caused by cramps in the stomach. Because of its antiemetic properties, it is useful for cancer patients who usually feel like vomiting after a chemotherapy session.

Bubblicious has a similar structure to that of a pure Indica. It is sturdy, and bushy. As such, it does not easily break off due to strong gusts of wind and neither does it snap from the weight of its heavy buds. It may need to be topped early as it can grow too tall for its grow space. Although it performs well outdoors, its growers suggest cultivating the strain indoors where adjusting factors such as lighting, temperature, and humidity is convenient.

It may require some pruning from time to time though. Apart from encouraging even light and air circulation, it helps dry off any moisture stuck on the buds or leaves that can develop into mold. Trimming off dead leaves is also important so nutrients travel to healthier budding sites.

Soil fully develops Bubblicious’ terpene profile while hydroponic systems produce cleaner buds at a faster rate. Regardless, it performs best when the Sea of Green method is applied. Meanwhile, exposing the plant to colder temperatures early into the flowering period to bring out its pink and purple hues.

Adding to its appeal is Bubblicious availability in regular, feminized, and autofem form.

Everything you need to know about: Growing Bubblicious Plants Under ScrOG, Read our article for all the details – Flowering and Sweet Taste of Success.

The last two assures aspiring growers of a full female batch while the first requires extra care and attention as half the batch can turn out to be males.

Nirvana’s Bubblicious usually flowers within 8 to 9 weeks indoors. However, it sometimes extends up to a week depending on the grower. Regardless, it yields between 12 to 16 ounces of buds per square meter.

In the northern hemisphere, garden grown Bubblicious flowers from the second to the last week of October with each plant producing at least 16 ounces of buds per square meter.

What is the Bubblicious strain yield?

How much THC does Bubblicious have?

What are the origins of the Bubblicious strain?

Bubblicious was created from Bubblegum.

Have you ever smoked or grown your own Bubblicious? Please let me know what you think about this marijuana strain in the comments below.