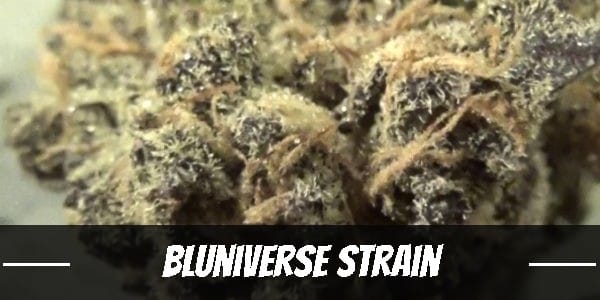 Bluniverse is a highly sought-after strain. Not only for its impressive potency, but also because of its cerebral effects and fruit-flavored terpene profile. In fact, a single puff of its delicious smoke is enough to send the most seasoned users on a high-flying psychedelic trip.

In developing the perfectly split hybrid, Dynasty Seeds used a female Blue Magoo and a male Ms. Universe. The former produces striking buds that envelop the palate in a fusion of appetizing berries. Meanwhile, the latter is among the most popular strains that the breeders produced and was added to enhance the sweet and fruity flavors of its co-parent. It also provided its offspring a distinct buzz.

Apart from being a great choice for thrill seekers, Bluniverse is also prized among growers for its unique phenotypes. The first two take after either parent whereas the third exhibits mixed traits.

Expect Bluniverse to hit hard with an uplifting head high that leaves one in a hazy yet happy state. A rush of euphoria also clears the mind and stimulates it, inspiring a spark of creativity as thoughts flow and form freely. Because of its great wake-and-bake qualities, the well-balanced hybrid can be enjoyed in the mornings and early afternoons. It can also be used during a brainstorming session.

Looking to buy seeds like Bluniverse? Check out our marijuana seed bank.

After about an hour or two, a light pressure introduces itself from behind the ears. It surges through the muscles in waves and soothes each limb. Despite its intensity, the deep relaxation is not at all sedating. Neither does it leave one lethargic. Instead, users move with ease while completing tasks.

With THC levels averaging at 25%, Bluniverse is not one to be underestimated. Accidentally overusing it can turn an otherwise pleasant high into a dizzying experience.

It is important to note that Bluniverse’s phenotypes each have their own fragrance. Most, however, emit a strong blueberry aroma accentuated by a pleasant touch of cherry and spiced vanilla. When broken apart or combusted, it produces a woody scent with notes of wet soil.

Bluniverse explodes into a myriad of flavors in the palate. The most notable of which is a sweet medley of blueberries and fresh cherries. Vanilla-like overtones with a spicy tinge leave an interesting aftertaste in the mouth.

During sessions using Bluniverse, many users experience symptoms of dehydration such as dry eyes and a cottonmouth. This is because the strain’s cannabinoids interfere with the production of moisture.

Both are usually mild and, as such, are often ignored by many seasoned users. However, the dry spell can be a cause for concern for beginners. It is best to drink a beverage to rehydrate the body. Nothing alcoholic or caffeinated though, as it can exacerbate the dryness. In such cases, the best choice is always water.

Stress is an everyday part of life. However, when it exceeds normal levels, it can lead to the development of alarming health issues which include depression, anxiety, and hypertension. It can also exacerbate existing conditions. For this reason, it is important to address stress before it accumulates at an alarming rate.

Looking to buy seeds like Bluniverse? Check out our marijuana seed bank.

To this end, Bluniverse works perfectly. It reduces stress by inducing an uplifting but calming head high. Apart from enhancing the mood, the bud also temporarily stabilizes turbulent emotions and overwhelming dread. As such, it also positively affects users with mental health issues such as depression and PTSD.

At up to 1%, Blue Universe’s CBD levels are already higher than most strains in the cannabis industry. And, with the painkilling properties of its THC, it envelops the body in total relaxation while soothing away pain.

One of the best times to use Bluniverse is hours before a meal. It eases cramps in the stomach and encourages a hearty appetite. Meanwhile, its antiemetic properties prevent people from vomiting away food as is the case of cancer patients undergoing chemotherapy.

Bluniverse is an attractive plant. Hints of green and flashes of purple underneath a thick coat of frosted resin. When untamed, it can grow tall and become quite imposing. As such, those planning to grow it indoors may have to shorten the vegetative period to keep manage its height. An early topping will also further improve its trichome production.

Ideally, outdoor conditions should be warm and sunny. Humidity, too, should be stable as either a lack or excess of it can prove all the difference in the plant’s susceptibility to mold or mildew. The nutrient-rich soil of farms and gardens positively affects terpenes and produces among the most mouth-watering buds. As such, it is a great choice for many enthusiasts looking for a delectable smoke.

At the moment, Bluniverse is only sold in regular form. Aspiring growers may need to employ pre-germination methods such as soaking to improve chances of acquiring females. Low-Stress Training, on the other hand, will keep calyx-filled plants from turning into hermaphrodites.

Regardless of the phenotype, Bluniverse takes between 8 to 10 weeks to fully bloom. Yields usually average around 12 to 14 ounces of buds per square meter however, applying techniques like the Screen of Green can help the plant produce more and even flower faster.

Outdoors, Bluniverse finishes flowers in October – around the first to the last week of the month. Harvesting at least 14 ounces of buds per plant is usually the norm but experienced growers can improve yields.

What is the Bluniverse strain yield?

How much THC does Bluniverse have?

What are the origins of the Bluniverse strain?

Bluniverse was created from a mix between Blue Magoo and Ms. Universe.

Have you ever smoked or grown your own Bluniverse? Please let me know what you think about this marijuana strain in the comments below.