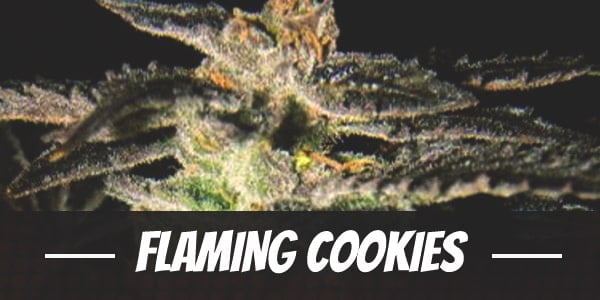 In spite of its name, Flaming Cookies is not a baked good and neither is it up in flames. Although, it does leave users feeling baked when consumed excessively. In moderation, however, it produces a pleasantly uplifting and totally relaxing high.

CannaVenture used two prominent strains renowned for their recreational and medical effects. The first being the company’s own backcross of the Fire OG, which is recognized as being one of the most powerful strains in the OG line. A ‘Forum’ cut of the famous Girl Scout Cookies (GSC) was later added to improve its structure, yield, and terpene profile.

Like Fire OG, Flaming Cookies is potent. Normally, its THC levels range from 24% to 25%. While its recreational effects are well noted, the bud also has impressive medical potential. Its psychoactive compounds provide a reprieve against physical pain and temporarily appease symptoms of certain mental health issues.

Like many Indica-dominant hybrids, Flaming Cookies is a slow starter. As such, some users make the mistake of smoking too much of the bud early on. And, once its initial onset creeps in, the rush of euphoria can be quite overwhelming.

However, those who pace its dosage will notice a general upliftment. Most of the time, the cerebral effects positively affect one’s disposition. Moods are brighter and thoughts are merrier. Users also radiate with a happiness from within.

Gradually, a soothing sensation ebbs down from the temples and swarms the body. It removes tension from the muscles and envelops one in a deep relaxation. Planting itself in the limbs is a heaviness. Staying awake becomes a difficult task as the eyes begin to droop. Users eventually fall asleep as the Indica effects persist.

Because of its heavy-hitting and sedating effects, Flaming Cookies is best enjoyed at night or after a long day at work. Due to its potency, it can potentially lock beginners and experienced users to the couch. For this reason, users must remember to moderate its use to fully enjoy its tranquilizing effects.

At the first whiff, Flaming Cookies produces a powerful spicy overtone with equally strong herbal undertones. Complementing it are notes of diesel accentuated by the sour taste of ripe lemons. Broken apart, there is a surprising note of wood and wet soil.

Drawn in, Flaming Cookies explodes with flavors of citrus and herbs in the palate. Blending with it is a spicy tinge of diesel. On the exhale, a woody and earthy aftertaste washes over the mouth.

Dehydration is usually a common side effect of marijuana. This is because the main psychoactive compound in marijuana interferes with the production of moisture. As such, it is not uncommon for users to experience a cottonmouth and dry eyes while using Flaming Cookies. Both usually go away after a few hours but, if symptoms persist, users may down a few glasses of water to stay hydrated.

Because of potency, Flaming Cookies can sometimes make users “green out” especially when consumed in high doses. It is marked by a heightened sensitivity to one’s surroundings resulting in either a temporary dizziness or a feeling of paranoia. Most of the time, however, users only experience a subtle headache. For this reason, users must always exercise caution while using the bud.

Flaming Cookies attributes its medical value to the effects induced by its cannabinoids. THC, for example, turns into a natural painkiller that soothes away various aches beginning from the temples. It also eases cramps in the stomach which can sometimes lead to a lack of appetite. As such, one of the best times to use the Indica-dominant bud is a few hours before mealtime.

Among Flaming Cookies’ best uses is as a stress reliever. It enhances the mood and stabilizes any turbulent emotions that develop when one is constantly under pressure. The same effect also slows down the early onset of depression and other mental health issues such as PTSD which are both hastened by chronic stress.

Sleep is one of the most important components in the healing process and with Flaming Cookies’ sedating qualities, going to bed becomes less difficult. Not only that, the natural sleep-aid is perfect for people with insomnia as it improves the quality and quantity of sleep.

Flaming Cookies has many of the highly praised qualities of Indica plants. It has a naturally short stature and, because it hardly goes beyond 3 feet, rarely requires an early topping. Still, those with limited spaces may shorten the vegetative period to keep the plant short.

The Indica-dominant herb also performs well outdoors. It is sturdy and highly resistant against strong gusts of wind and inconsistent, fluctuating temperatures. However, some of the moisture in the air may get stuck in the crevices of its dense buds and develop into mold or mildew.

Indoors, Flaming Cookies performs even better. The convenience of being able to adjust factors such as temperature, lighting, and humidity, along with the added protection against pests, is a great advantage. Applying the Sea of Green method will help increase yields and even hasten the flowering process.

In both settings, however, aspiring growers will have to prune the plant often to encourage better air circulation. As alluded to earlier, moisture sticks easily to the dense, lime green buds of Flaming Cookies. As such, airing it out is necessary. Cutting away parts will also help distribute nutrients better.

In controlled environments, Flaming Cookies takes 8 to 10 weeks to bloom. Growers typically harvest between 10 to 12 ounces of buds per square meter once mature.

Garden grown Flaming Cookies usually flowers from the last week of September up to the third week of October. Once ready for harvest, it yields at least 12 ounces of buds per plant.

Have you ever smoked or grown your own Flaming Cookies? Please let me know what you think about this marijuana strain in the comments below.