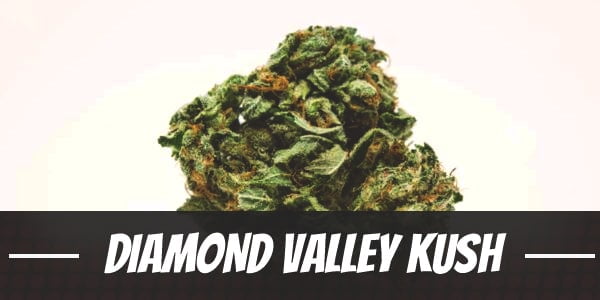 Diamond Valley Kush is a powerful strain that envelops users in a deep relaxing buzz. Before that, however, it starts off with a soothing euphoria that lightly tickles users with its happy rush. It piques the mind with interesting thoughts, making it a reliable conversation starter for users hanging out with friends.

Medicinal users may also find comfort in its attractive. Therapeutic and tastier than medicine, it does not have the bitter aftertaste but is equally effective. It releases the body from the shackles a myriad of afflictions, enhancing one’s quality of life albeit temporarily.

Though its history is shrouded in mystery, it does trace its lineage back to Diamond OG. This true Indica has a compact bud that exudes a Pine-sol aroma as it sparkles in trichomes. Upon consumption, it induces a stoney physical buzz that kneads the muscles into mush. Without a doubt, end in a sedating spiral at the comedown.

Despite its seemingly Sativa effects, Diamond Valley Kush is a full-blown Indica. Its heavy-hitting buzz could settle in the limbs and drown users in lazy contentment. Beyond moderation, it has the potential to lock users to the couch while the mind races.

Diamond Valley Kush has an uplifting buzz that clears the mind after toking. It melts away worries and improves the mood. There is a change in disposition as well. Users not only seem happier, but also more upbeat and talkative.

Used with like-minded friends, Diamond Valley Kush could prompt interesting conversations that ignite creativity. Casual users will find that it also sharpens the senses and makes one keenly aware of the surroundings. The amplified sounds and sights also allow users to ruminate.

At the comedown, it turns into a soothing buzz that settles in the limbs. Releasing tensions, it loosens the muscles and turns one limber. It is the perfect time to lounge on the couch while watching a favorite show or dancing aimlessly in the living room while listening to ambient music. Regardless, it leaves users in a state of relaxation that could not be interrupted by the slight problem.

Diamond Valley Kush is a pungent strain with strong hints of apples and wet soil. The subtle sweetness intensifies after crushing or combusting the buds.

There might be some slight coughing when toking Diamond Valley Kush. It has a little bit of sharpness on the first inhale, but it gradually turns earthier. On the exhale, it leaves a sweet aftertaste of apples.

As always, users will be under a dry spell that manifests itself in the eyes and the mouth. It is also possible to experience anxiety, especially when accidentally consuming Diamond Valley Kush beyond personal tolerance levels. Another factor that could affect the experience is one’s disposition before the high. If possible, only use the strain when one is a good mood.

Diamond Valley Kush is not only impressive with its recreational effects, but also in how it provides comfort to patients. Its cannabinoids have therapeutic benefits that aid in the management of psychological or mental concerns and physical health issues. It is also effective in appeasing stress.

In inducing its uplifting buzz, it calms the nerves, melts away worries, and enhances the mood. At the same time, it pushes back the overwhelming dread caused by one’s loneliness, cynicism, or self-depreciation. Because of this, it is a source of comfort to patients with depression, anxiety, or PTSD. It could also provide consolation to patients with ADD/ADHD since it does clear the mind, increasing focus and allowing one to stay productive.

It also has potent analgesic and muscle-relaxing effects. Starting from the temples, it reduces intraocular pressure or pressure from behind the eyes to prevent it from intensifying headaches or causing migraines. Meanwhile, its stress-crushing buzz relieves fatigue that is often characterized by random pains, aches, and cramps all over the body.

Diamonds can occur in different colors – green, yellow, and brown. Diamond Valley Kush is proof of this. It has a luxurious emerald tint with deep orange hairs that looks golden under a layer of thick trichomes. Its buds are also compact, reinforcing the idea that it is a precious stone.

The influence of Indica is evident in Diamond Valley Kush’s structure. It has a sturdy but short frame with dense foliage. Growers can cultivate it indoors where it will do well in both a dedicated tent and grow room with limited vertical space.

Tickle kush is a dreamy and uplifting hybrid strain that you can enjoy alone or with friends. Read our full review!!

It thrives best in a Sea of Green setup which is non-invasive. However, it will need to be trimmed often so it does not harbor any moisture in between its crevices. Installing a proficient ventilation system also encourages better aeration especially in the lower nodes.

Outdoors, it does fairly well too. It has good resistance to many unpredictable growing factors such as low temperatures, relatively strong winds, and pests or disease. The gentle breeze also strengthens its stalks, so it does not topple easily from the weight of its heavy buds.

It would be best to situate Diamond Valley Kush in an area where there is nothing that obstructs the sun’s rays. In this way, it can maximize and absorb the most amount of light for better yields, faster growth, and vigorous trichome production.

Diamond Valley Kush has an indoor flowering period of 7 to 9 weeks. Though short, it is rewarding. It produces 10 to 12 ounces of buds per square meter.

In the northern hemisphere, Diamond Valley Kush blossoms from the last week of September to the middle of October. Growers can expect this high-yielder to produce at least 12 ounces of buds per plant once ready for harvest.

Have you ever smoked or grown your own Diamond Valley Kush? Please let me know what you think about this marijuana strain in the comments below.