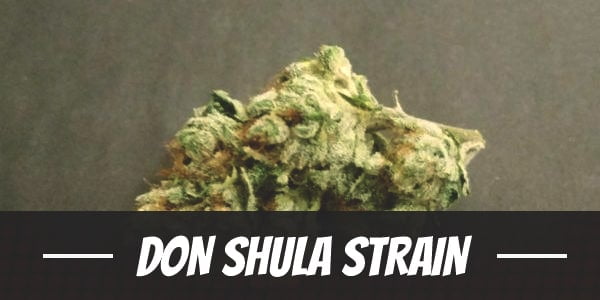 Don Shula is a professional football player and coach who has more games than any other NFL coach in his 33-year track record. He keeps his players in motivated and clearheaded throughout the game. And, for better play, he encourages them to stretch correctly to prevent any problems that may arise. Bleacher report has even alluded that he might be one of the greatest coaches of all time.

Being an inspiration to many football fans, it was only likely that a strain would be named after him. The Indica-leaning Don Shula is one that users could toke in the morning. It refreshes the mind and gets one ready for the day, clearing the head so users can focus on tasks and see things from various perspectives.

The comedown is not at all heavy-hitting too. In fact, one could say that it complements the invigorating rush at the start. Rather than settling into the limbs and making it difficult to move around, it makes the body limber by loosening tightness around the muscles.

It has a distinct smell, one that blends together tropical notes with the stronger sourness of diesel. Most likely, Don Shula got this trait from Diagonal. The East Coast Diesel and True OG cross has a chemical-flavored smoke. Meanwhile, its other parent The White caters to enthusiasts who prefer a more muted profile.

One of the most striking features of an Indica-leaning strain is its heavy-limbed buzz and sedating comedown. In this regard, Don Shula does not fall under the rules of the norm. It delivers a happy high that clears the mind of worries and distractions.

If any, its common ground would lie in its slow-starting nature which gives users a 10 to 15-minute head start to prepare for the upcoming onset. Because, once it hits, it quickly swarms the mind in a stimulating buzz that sparks creativity. It sharpens the senses too, enhancing focus and motivation as a result.

Preparing snacks ahead of time would be beneficial. After all, the subtle stimulation and the subsequent use of one’s mental power can induce hunger. Having to go to the kitchen or the break room could be a hassle unless that were one’s goal, of course.

Don Shula has a tropical profile characterized by strong hints of citrus. Complementing it is a buttery undertone that balances out the tanginess.

At the first toke, its tropical overtones immediately take the spotlight. Following it is the taste of citrus that enthralls and energizes the senses with its tangy notes. On the exhale, it leaves a buttery aftertaste.

It is normal to experience arid eyes and a cottonmouth while smoking Don Shula. Although unavoidable, it is very mild. Seasoned users may even ignore the slight discomfort due to predisposition to the dry spell. However, one could still manage the irritation through hydration and avoidance of caffeinated and alcoholic drinks.

It is not wrong to think that Don Shula may be recreational strain. After all, that has been the assumption about cannabis for years. Still, this does not discount the award winner’s therapeutic benefits. Moreover, the same psychoactive compounds have profound mental and physical reprieve.

Its uplifting high clears the mind of worries and eases turbulent emotions. In its place, there is an innate sense of peace that fortifies one’s mental strength. As such, it could be used to get rid of stress and calm psychological distress. One may use it to let go of a persistent negativity brought about by conditions like depression, anxiety, and PTSD. The mental clarity, along with the increased focus, could also be of use to patients with ADHD with regard managing distractibility.

A potent analgesic, Don Shula provides comfort to patients suffering from physical afflictions. It is an effective alternative to opioid-based medicine that could sometimes bring unwanted side effects. It soothes the body, relieves chronic aches, and ease pains in the process. Among its best uses is eliminating common issues such body aches, joint pains, and arthritis. Meanwhile, its subtle stimulation instantly erases fatigue.

One of the best times to use Don Shula is right before a meal. It frees the stomach from gastrointestinal pains and encourages a hearty appetite. For this reason, too, it is highly beneficial to patients with eating disorders like anorexia or are suffering from cachexia.

Don Shula is a relatively short plant that users could grow in a small tent or grow room. Provisions could be made, of course – especially as it begins to grow, become dense, and branch out. For instance, one may add a small but fan that will cast a light breeze unto the batch, so it strengthens its stalks and reduce the heat

Its compact structure allows growers to cultivate at least four plants in a single square meter. Thus, it grows best in a Sea of Green setup. However, it will need some constant pruning and trimming. As it develops, it becomes bushier and denser which increases its likelihood of accumulating moisture in between its crevices that develop into mold. Another way to remedy this is to install a proficient ventilating system that will reduce humidity levels.

Outdoors, it thrives best when it receives a lot of sunlight. It grows slightly taller and branchier. It could even produce higher yields. With regard its care, there is no need to deviate from the usual growing practices. Don Shula is fairly easy to grow and has a well-developed resistance to common pests and disease that improves its chances in surviving the cooler weather of the northern hemisphere.

TIP: Looking to buy seeds like Don Shula? Check out my seed bank

Don Shula has a short flowering period that can be as short as 7 weeks or as long as 9 depending on the conditions. Once ready for harvest, turnouts can be anywhere between 10 and 12 ounces per square meter.

Flowers usually bloom around the last week of September to the second or third week of October for Don Shula. A high-yielder, growers can expect at least 12 ounces of buds per plant from the Indica-leaning strain.

Have you ever smoked or grown your own Don Shula? Please let me know what you think about this marijuana strain in the comments below.