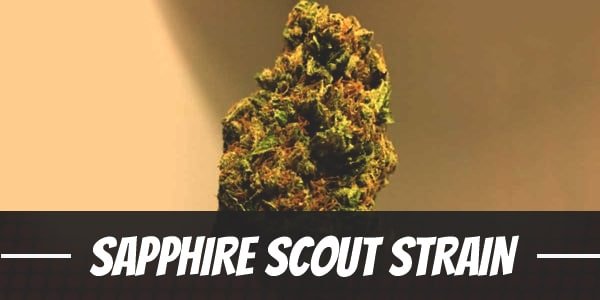 Modern strains often boast high THC levels, but few ever go beyond the 25% range. One of which is Sapphire Scout, a robust bud that produces a powerful head and body high that could easily topple beginners. However, the potency of its cannabinoids is not limited to recreational use. It is therapeutic comfort to many patients.

It gains its medicinal qualities from True OG. This Indica-leaning bud has managed to win a spot in each High Times Medical Cup ever since it was first signed up in 2010. Its effects are quite mellow but long-lasting, giving users a reprieve against mental and physical afflictions.

Its heavy-hitting and sedating buzz is likely the influence of Girl Scout Cookies. Its accolades, however, are not only limited to its effects. Justice is due for its performance in the grow room. It is sturdy, branchy, and produces stunning purple buds.

Sapphire Scout, itself, is equally attractive. It produces the alluring azure that its name represents. Further enhancing the look are its crystal trichomes which seem to sparkle under the light but give it a gleam upon closer inspection.

Beginners should be wary about using Sapphire Scout. It is a thrill seeker’s strain that boasts up to 27% THC. Using beyond the recommended amount could lead to a couchlock. Seasoned users, who are accustomed to potent levels of the psychoactive compound, will find that it uplifts the spirits, eliminates worries, and releases tension from the body.

A slow-starter, it does not overwhelm the mind with a head-slamming high. Instead, a gentle euphoria characterizes its initial onset. It gradually improves the mood, allowing users to bask in happiness even as the high comes to an end. No doubt, it has the capacity to turn a stressful and trying day around.

Its comedown is a heavy-limbed buzz that settles into the body. Users will want to find a comfortable spot to sit or lie down to relax because, in all likelihood, it will end in a deep sleep. Its sedating buzz makes the eyelids droop until it closes, and one drifts off to dreamland hand-in-hand with Mr. Sandman. Thus, using it in the morning requires extra caution although it would make for an excellent end-of-day companion.

Sapphire Scout has a sweet aroma that could be likened to berries. There is a blueberry overtone once the buds are broken apart, but it eventually develops into a sour diesel upon combustion.

At the first toke, a subtle sweetness coats the palate. Sour hints from notes of crushed berries and blueberries enhance the overall flavor. On the exhale, the smoke becomes a stronger diesel that could illicit some coughing.

A highly potent plant, it is possible to experience a little bit of anxiety while toking Sapphire Scout. It is usually brought about my overconsumption but could also be influenced by one’s disposition before the high. Most of the time, however, the adverse reactions are limited to arid eyes and a cottonmouth which is easily managed through hydration.

Sapphire Scout is no doubt a recreational thrill seeker’s dream. However, the same psychoactive compounds that deliver its intense high is also responsible for its highly therapeutic qualities. Thus, its effects could double as a reprieve.

Its head high, for instance, calms the nerves, clears the mind, and frees it of negativity. It is particularly good at managing symptoms of depression, anxiety, and PTSD. Through a similar mechanism, it could also relieve stress. It reduces the overwhelming dread that users feel when mentally or physically overworked.

It could also be used as an analgesic. It relieves various aches and pains all over the body, regardless of its cause, intensity, and frequency. Not only that, it envelops the body in relaxation so patients can move around with relative ease thereby enhancing the quality of life.

Patients with eating disorders such as anorexia may also benefit from the strain’s light invigoration and muscle-relaxing properties. It soothes the stomach and stimulates the appetite so users could eat heartily without worrying about gastrointestinal spasms or pain.

Mentally and physically relaxed, Sapphire Scout eventually induces a sedating buzz. It lulls users to bed within hours after the first toke, allowing for a deep sleep that invigorates users for the next day.

Sapphire Scout is a robust plant that grows vigorously between the vegetative and flowering phase. While growers could leave it to flourish in the garden or farm, indoor cultivators may need to manage its height. Topping – removing the top to redistribute nutrients to new offshoots and the lower nodes – is an excellent choice for keeping it short but bushier.

Another way to restrict Sapphire Scout’s size is through the Screen of Green method. It encourages lateral growth by weaving the upper and lower nodes into a net installed above the current canopy. In bringing up the branches further down the plant, it also improves light distribution, so each receive equal illumination.

Growers who plan on cultivating Sapphire Scout outdoors will need to strategize. It should be in a secluded area to protect it from intruders, unwanted eyes, and pests. Another thing to consider is that it is free of obstructions so there is enough light that could reach the batch. There is also the spacing between each plant, so it does not develop humidity-related problems such as mold, mildew, and bud or root rot.

It takes between 9 to 10 weeks for Sapphire Scout to fully blossom. At harvest, growers can chop down between 14 to 21 ounces of buds per square meter.

Sapphire Scout flowers between the middle to the last week of October. The high yielder produces between 88 to 123 ounces of buds per plant once ready for harvest.

Have you ever smoked or grown your own Sapphire Scout? Please let me know what you think about this marijuana strain in the comments below.