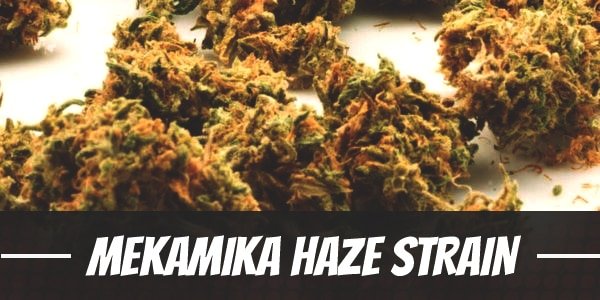 It is rare to find a pure strain in the cannabis industry. Most of the time, users will come across hybrids that will lean toward one side. In this regard, alone, Mekamika Haze is special. It is 100% Sativa with potent THC levels.

In spite of the seemingly gentle buzz at the onset, Mekamika Haze is actually a highly potent strain that can easily overwhelm users once its effects intensify. Thus, correct pacing and moderation are essential for keeping the high pleasant.

Its backstory is laced in mystery. Supposedly, it was picked up from the Amazon. Many even believe that it shares its genetics with another sativa named Mango Rosa. Regardless, one thing is for sure. It traces its lineage back to Brazil.

During the onset, the pure Sativa delivers a soothing head buzz that improves the mood almost immediately after the first few tokes. It clears the mind of negativity, worry, and hopelessness. In its place, the bud plants a calm euphoria that brings back good memories while fortifying one’s emotional strength at the same time. Giggles may escape the mouth occasionally especially when engaged in a conversation with like-minded friends. Similarly, casual users could just take advantage of the sharpened focus and creativity that it inspires.

After about 20 to 40 minutes, a buzzing sensation spreads from the back of the neck to the lower extremities. It soothes each muscle in the body, kneading it like a masseuse. In all likelihood, one will fall into a deeply relaxing buzz that does not interfere with one’s activities or goals for the day despite of its intensity.

No doubt, Mekamika Haze is definitely a strain that should be use in the morning. It supplies a seemingly endless amount of energy that powers users through the day or at least help one get by. Using copious amounts at night could lead to problems getting to bed or falling asleep.

Floral and fruity scents line the aroma of Mekamika Haze. It is sweet with strong tropical vibes reminiscent of citrus, mangoes, and pineapples that further intensify upon breaking apart and combusting the buds.

Enthralling the senses is a tropical citrus with strong hints of mangoes and pineapples. Enhancing its fruity overtones are floral notes of lavender.

Apart from the usual dry eyes and cottonmouth, Mekamika Haze can also induce a subtle feeling of paranoia. Not to worry though, it is rare and will likely not happen unless one consumes too much of the bud. There is also a chance that one’s disposition before the high contributes to the side effect.

Among Mekamika Haze’s best uses is improving the mood. While it is mostly thought to be recreational, the uplifting buzz could also be used to temporarily eliminate negativity thereby stabilizing emotions and providing users a sense of clarity. With clearer perspectives, it becomes easier to tackle problems caused by stress as well as some psychological distress.

Its invigorating effects stimulate the appetite. Patients with eating problems, such as anorexia or cachexia, will find that it eases the process of digesting meals. In this way, users need not worry about spasms or gag reflexes occurring as food is reintroduced to the stomach.

Apart from that, it also works as an energizer that staves off fatigue by relaxing the muscles and relieving aches. It is also a potent analgesic that provides a reprieve against various common aches and pains caused by arthritis, headaches, joint pains, and back problems.

A drowsiness eventually settles into the limbs as the mental and physical freedom from inhibition persists. It lulls users into a deep sleep that raises energy levels and improves the mood so one feels thoroughly invigorated the next day. Insomniacs will that it is equally effective as OTC sleep aids.

Mekamika Haze is a sturdy strain. Hailing from pure landrace genetics, it can withstand a variety of elemental problems such as rains, winds, and heat yet still thrive. It could also thrive indoors where one can easily adjust factors such as lighting, temperature, and humidity to provide a comfortable growing environment for the plant. However, this does not mean that it is an easy plant to grow.

It grows vigorously very within a short amount of time and beginners will likely have trouble bringing it up to its full potential. Thus, it will require the care and attention of experienced growers who can keep up with its fast-paced growth and have a keen eye for signs of distress. Under their watchful eye, making quick but accurate changes to its feeding or nutrition are easier.

Indoors, it will need to be topped early since it tends to grow very tall. Left unattended, it could inhibit the light distribution and air circulation among the lower nodes. Advanced growing techniques like the Screen of Green could remedy this by bringing up the lower nodes to the top through a screen situated above the current canopy. Together with the first technique, it will produce multiple budding sites.

Available only in regular form, it is likely that at least 50% of the batch will be males thereby reducing the yields. It would be best to apply pre-germination techniques on the seeds that will improve the possibility of developing females. Avoiding high stress is also essential since it might develop into a hermaphrodite.

It takes Mekamika Haze anywhere between 9 to 10 weeks. Growers can expect at least 12 to 16 ounces of buds per square meter once it is ready for harvest.

In the northern hemisphere, Mekamika Haze flowers between the second or third week of October up to the last week at the latest. The sturdy-framed plant produces at least 16 ounces of buds per square meter.

Have you ever smoked or grown your own Mekamika Haze? Please let me know what you think about this marijuana strain in the comments below.