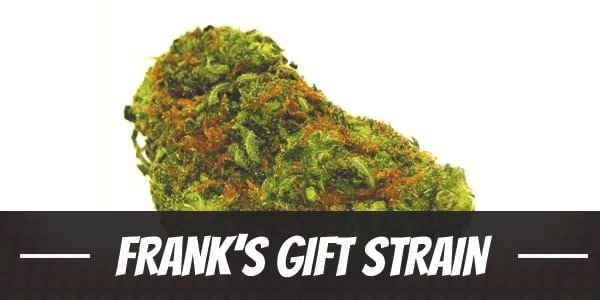 There is a bittersweet but touching story to Frank’s Gift.

It starts with Frank, a cancer survivor who relapses again despite already battling the dreaded condition. His treatment, chemotherapy, is almost just as excruciating. Although it prevents the cancer cells from further dividing, it has painful side effects that make the muscles, joints, head, and stomach write in aches and pains.

Seeing this, his brothers at The Guild decided to develop a bud that could blunt the pain, prevent it from worsening any further, or just temporarily appease it. Their search was a long process of growing seeds, phenotype hunting, and testing for cannabinoids. Despite the 1 in 4 chance of cultivating a plant contains a bare minimum CBD, the growers struck luck in Frank’s Gift.

Frank’s Gift is a standout against the many strains in development at The Guild’s lab. It is a phenotype of Skunk Haze, producing a milder mood lift and stress-crushing body high. Relief lies in each bud, providing Frank a break against the negative side effects of his medicine. Not only that, it is an impressive plant to grow. It has impressive trichome production that makes it good for cannabinoid extraction to create potent oils.

At 1% to 5% THC, it is safe to say that one should not expect much from Frank’s Gift recreationally. It does not deliver a soaring head high nor a body-numbing comedown. Instead, it is a mellow mental uplift, subtle buzz of energy, and gentle relaxation that eases out the stress from one’s body.

Enthusiasts will find that it is an impressive wake-and-bake strain. It helps clear the mind from chaotic thoughts and create coherence for it to flow or form freely. Used as a daytime companion, it could help casual users come up with fresh perspectives with regard an ongoing problem, issue, or topic. At the same time, it also sharpens the senses and improves focus.

Even as the hours pass, it continues to supply users with a small spark of energy which pairs well with the initial head high. Users are not only lively, but also productive – further adding to the happiness the strain instills. As the hours pass, however, it soon becomes a soothing blanket of relaxation. It frees the muscles of tension, kneading the muscles like a masseuse as it makes its way down to the lower extremities.

Frank’s Gift has an earthy aroma with woody undertones. Upon combustion, it releases sweet overtones that counteract the initial profile.

Frank’s Gift has the herbal aftertaste of traditional medicine. Enhancing it are notes of spice and a touch of refreshing pine to counteract the harshness. Further savoring the smoke brings out a tangy but sweet fruitiness with hints of diesel that stays on the exhale.

A cottonmouth and dry eyes are two of the most common reactions to smoking cannabis, even high-CBD strains like Frank’s Gift. It may also come with a bit of dizziness. It is mild, however, and barely a cause for any concern. If any, users should be more wary of a headache and anxiety that comes from overconsumption.

Frank’s Gift is a therapeutically-enriched cannabis. It has potent CBD levels that average between 20% to 25% which is higher than most of the strains under the same category. Patients could easily turn to it as an alternative to synthetic medicine. It is equally effective, delivering its restorative head and body effects quickly. Not only that, at this level, its effects last just as long too.

Stress relief is among the gifts that this cannabis brings. It soothes the worries of the mind while calming the nerves. It removes negativity and fortifies one’s emotional strength so users could stay positive. It could also be used as an antipsychotic, anti-depressant, and anxiolytic to manage symptoms of depression, PTSD, and anxiety. It removes feelings of overwhelming dread, hopelessness, and despair.

It has potent anti-inflammatory properties that will reduce the swelling and appease redness. It could also be used as an analgesic to temporarily eliminate pain and aches all over the body caused by issues like arthritis, bruises, joint pains, as well as head and back aches. It is particularly excellent at relaxing the muscles, so it does not contract. Thus, patients may also be use it to ease cramps and spasms.

Frank’s Gift exhibit many Indica traits. It has a sturdy frame and a short height that makes it even more manageable. Its branches are quite hardy, able to carry the weight of its heavy buds. Growers can grow the plant virtually anywhere – indoors, outdoors, and in greenhouses – without much problem.

Its dense foliage sometimes inhibits air circulation to the lower nodes, resulting in moisture developing into mold or mildew. With that said, growers may employ methods to improve air circulation in the lower nodes including regular pruning and trimming especially when employing a Sea of Green setup. Removing dead branches or leaves could also improve nutrient distribution.

Indoor growers may want to install a carbon filter together with a proficient ventilation system. It produces an intensely pungent smell that could overwhelm the senses or seep into the neighborhood. Outdoor growers, on the other hand, need not worry as the breeze dispels the scent. However, one may want to strategically cultivate the plant in an area that is hidden from pests and intruders.

It takes between 8 to 10 weeks of flowering for Frank’s Gift to fully mature into harvestable buds. During which point, it should produce between 12 to 14 ounces of buds per square meter.

In the northern hemisphere, Frank’s Gift blossoms around the middle of October up to its last week. Growers can expect at least 14 ounces of buds per plant once it is ready for harvest.

Have you ever smoked or grown your own Frank’s Gift? Please let me know what you think about this marijuana strain in the comments below.