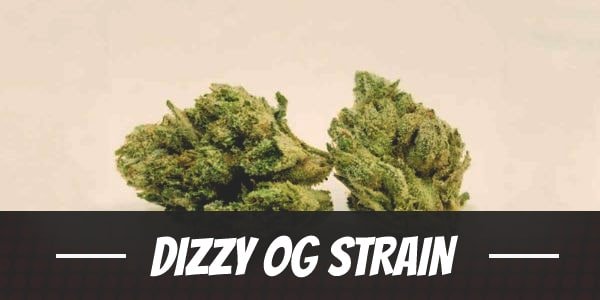 Dizzy OG exhibits many hybrid traits. It is relatively tall but produces dense foliage. Its buds display the same quality too. Each stretch on one end, giving it the appearance of little spades, and all have a fluffy to compact structure. The crème de la crème, however, is its thick coat of trichomes which seems doubled because of its Sativa and Indica influences.

Upon consumption, it delivers a well-rounded head high that instantly improves the mood and frees the body of tension. In its place, there is a soothing buzz that continually relaxes the muscles like a masseuse. No doubt, it leaves users stress-free as the day continues.

Its lineage is shrouded in mystery, but it is revealed that the creator, famous rapper Dizzy Wright, used OG Kush. The similarities are uncanny. It is a hybrid with notable head and body effects as well as a faint diesel scent. If any, the only major difference is that Dizzy OG is slightly sweeter than most OG strains.

Although it is not dubbed as a recreational strain, casual enthusiast may still enjoy the strain. Its quick-acting high start with a rush of energy that invigorates both the mind and the body. At the onset, however, the most notable effect is its happy buzz that uplifts the mood and increases one’s sociability.

The state of euphoria amplifies sights and sounds that make the surrounding all the more interesting. One must remember, however, that Dizzy OG is a highly potent strain that contains between 15% to 22% THC. Using it beyond moderation or without proper pacing can potentially overwhelm the mind or lock users to the couch.

After 30 minutes to an hour, a soothing buzz trails down from the back of the neck and to the lower extremities. It soothes each muscle it passes through and envelops users in deep relaxation. Depending on one’s preference, the limberness could also be for performing light physical tasks.

Dizzy OG has that familiar OG Kush smell. However, instead of an overwhelming diesel, it is slightly sweeter with light tangy undertones of fruit. Enhancing it are notes of pine and wet soil that intensifies after combusting the buds.

Some gentle coughing is to be expected while toking Dizzy OG. Its tanginess is quite sharp on the throat, especially on the first inhale. Counteracting it, however, is the taste of sweet earth that immediately comes after – along with hints of pine and fruit.

Like other strains, Dizzy OG comes with some adverse reactions. Some of the most common are red, irritated eyes and a cottonmouth. However, the offshoots can sometimes be as serious as dizziness that could overwhelm the senses by amplifying one’s surroundings. Pacing and moderation, however, will keep the effects at bay.

As one of the recent winners of the Best Medical Hybrid Flower, Dizzy OG does not disappoint in the medical area. It is highly therapeutic, providing reprieve to users suffering from psychological, behavioral, and physical health issues. Moreover, there are many ways to take advantage of its psychoactive compounds.

For instance, it could be used as a stress reliever and anti-depressant. It induces an uplifting buzz that calms overwhelming emotions, while instilling a sense of peace. It refreshes the mind and, as a result, users do not only seem upbeat but also genuinely happy. Not to mention, the positive effects the strain has on one’s psyche translate to higher confidence.

In high levels, THC turns into a natural painkiller that can supplant OTC opioid-based drugs. It targets different aches and pains beginning from the temples down to the lower extremities. Because its relaxing properties are effective regardless of the reason, intensity, and frequency, it could fight off the symptoms of common conditions like cramps, headaches, inflammation, and arthritis.

Its ability to relax the body in totality also makes it an impressive antiemetic. It soothes the stomach and prevents it from contracting so patients do not vomit. Hence, it is an excellent reprieve against the nauseating side effects of chemotherapy.

Being therapeutic in purpose, finding seeds of Dizzy OG is close to nil. Still, breeders can determine its growth pattern based on its medicinal classification.

It is likely cultivated indoors where growers have total control over many essential factors like lighting, temperature, and humidity. In this way, there are little to no elements that will interfere with the plant’s growth. These artificial environments also allow for easy installment of life support or any other additional provisions.

The lighting fixtures, for instance, could be changed to 600-watt HID lights during the flowering period. Then, to manage the heat, fans could be installed all over the grow room, so plants do not produce curl inward or burn at the tips. Ventilation systems, on the other hand, will help regulate humidity so the growing area remains temperate.

This is not to say that it does not perform well in the outdoors. On the contrary, it performs better and yields higher. Rather, it may need some extra care and attention against pests or diseases that may ravage it. But the natural environment does Dizzy OG good, especially with the development of its terpene profile.

After flowering between 8 to 9 weeks, growers can expect between 12 to 14 ounces of buds per square meter. However, extending the blossoming phase by a week will further improve yields.

The hybrid flowers between the middle of October up to the last few days of the same month. Although it takes long, the wait is very well worth it as each plant produces at least 14 ounces of buds.

Have you ever smoked or grown your own Dizzy OG? Please let me know what you think about this marijuana strain in the comments below.