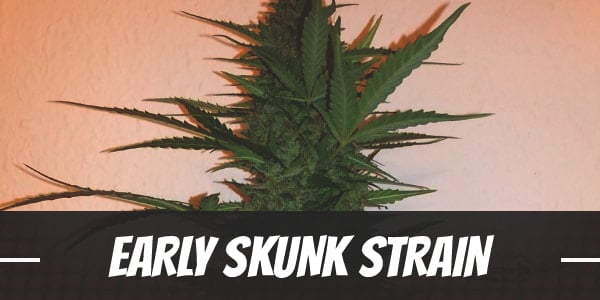 It is easy to understand why so many enthusiasts gravitate toward Early Skunk. Taking a swig of its smooth earty smoke induces a psychedelic effect unlike any other Indica-leaning strain. Rather than a heavy-hitting body buzz, its potent THC levels of 22% has an intense cerebral high that keeps users productive throughout the day.

In developing the award-winning bud, Sensi Seeds used two legendary staples in the cannabis industry. From Skunk #1, it gained its vigorous yields. Meanwhile, Early Pearl influenced its strong resistance to molds and ability to grow anywhere. Apart from its performance n the grow room, the two contributed to its earthy terpene profile and high THC levels.

For this reason, Early Skunk does not only catch the eyes of recreational enthusiasts or patients from the medical marijuana community but also to aspiring growers well. It thrives in almost any climate without sacrificing bud quality. This makes it an all-around smoke that is truly deserving of its prestigious award.

Though Indica-leaning, its little Sativa percentage has a great influence on its effects. In fact, one can even go on to say that its high is much more cerebral especially as a rush of euphoria slowly envelops the mind. In its prime, the psychedelic buzz rids the mind of distracting thoughts while inspiring a sense of happiness from within.

For casual users, the mental clarity ushers an influx of thought-provoking ideas. It sparks a surge in creativity that allows users to peruse propositions and problems in a new perspective. Feeling inspired and highly motivated, one’s short attention span is prolonged to tackle tasks for hours at a time or until it is completed.

A light pressure erupts from the temples after a few hours. Like lava, it creeps down slowly to the rest of the body as it crushes stress in its path. Eventually, a soothing buzz plants a heaviness in the limbs that can lock users to the couch if the bud is used beyond one’s tolerance. Keeping it from doing exactly that, however, is the persistent mental effects during the initial onset.

A great wake-and-bake strain, Early Skunk is an ideal daytime treat that adds a boost of energy in the morning or early afternoon.

Apart from the pungent smell of skunk, Early Skunk has strong floral notes that can easily fill a small room once the buds are opened. There is a subtle undertone of wet soil and wood too, which make the bud seem freshly picked or uprooted.

Just like how it smells, Early Skunk swarms the palate with its powerful skunk overtones. Floral undertones are present too, especially when its seemingly earthy smoke is savored. On the exhale, a woody aftertaste lingers even after the last puff.

There is not a strain in the cannabis industry that does not dry its users’ mouths. After all, each have cannabinoids that interfere with the production of saliva regardless of how it is consumed or the amount that is used. Accompanying is also a case of dryness in the eyes. Though mild, the resulting irritation can be quite uncomfortable especially for beginners. In such cases, it is best to stay hydrated throughout the day by drinking a few glasses of water.

Pairing it with an alcoholic drink, as well as consuming Early Skunk beyond limitations, can trigger a condition called ‘greening out.’ It is characterized by a disorienting dizziness that develops into a subtle feeling of paranoia as it progresses. For this reason, it is important to pace the bud by starting with low doses.

As master breeders with years of experience, Sensi Seeds does not only develop plants with superb performance in the grow room and great recreational potential but also strains of significant therapeutic value. As such, it should come as no surprise that Early Skunk provides patients with a reprieve against a wide variety of aches and pains.

In releasing pent-up stress, for example, Early Skunk leaves users feeling rejuvenated mentally and physically. It calms the overwhelming dread of anxious thoughts through its happy high while relieving symptoms of fatigue in the body. It is also this quality that makes the slightly Indica-dominant bud a viable anti-depressant that manages symptoms of various mental health issues such as depression or PTSD.

By instilling a strong sense of euphoria, it makes users temporarily forget various aches, pains, and the overall feeling of tiredness in the body as it relieves each one. At the same time, its relaxing properties prevent the muscles from suddenly contracting and causing pain.

Though its effects are largely Sativa, its structure is truly that of an Indica. It is relatively tall with broad fan leaves. Apart from that, it has sturdy stalks and branches that does not break from either strong gusts of wind or the weight of its dense buds.

Areas with high levels of humidity is mostly a problem to Indica-leaning strains as its compact structure will trap moisture that develops into mold or mildew. As such, Early Skunk’s strong resistance to mold is a great advantage.

Its resistance to mold makes Early Skunk the perfect Indica-leaning strain for tropical weather. Such areas usually have high levels of moisture that can seep into a compact structure and develop into mold. Still, it is best to prune the plan and thin out its thick foliage for better airflow, light circulation, as well as nutrient distribution.

Indoor growers must make sure to mask Early Skunk’s smell through carbon filters as its scent can be quite overwhelming.

Sensi Seeds has blessed aspiring growers with both the regular and feminized form of Early Skunk. The former is great for experienced growers looking to enhance skill while the latter is great for beginner green thumbs cultivating the strain for the first time.

Early Skunk usually blooms within 8 to 9 weeks. However, it can sometimes flower a week early. Regardless, the plant rewards growers with 14 to 18 ounces of buds per square meter.

In the northern hemisphere, Early Skunk flowers from the last week of September to the middle of October. Once ready for harvest, it yields at least 18 ounces of buds per plant.

What is the Early Skunk strain yield?

Early Skunk yields 14 to 18 ounces per square meter indoors and 18 ounces or more per plant outdoors.

How much THC does Early Skunk have?

What are the origins of the Early Skunk strain?

Have you ever smoked or grown your own Early Skunk? Please let me know what you think about this marijuana strain in the comments below.