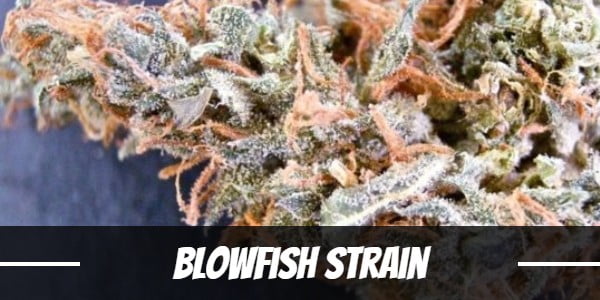 A hundred times more poisonous than cyanide, blowfish carry a paralyzing agent called tetrodotoxin in their organs and skin. While its flesh is considered a delicacy in some countries like Korea, China, and most especially Japan, one improperly prepared slice of fugu sashimi can be lethal to consumers.

Named after the fish, it does not mean that the cannabis strain is lethal for human consumption. Instead, the plant has earned the moniker because they both share the same dominant qualities. Very true to its name, it delivers a remarkably potent sedative-like effect to the body and phenomenal head high not found on most hybrids.

Developing Blowfish took a long time. Bred by Dutch Flowers, the idea was to improve on the two glaring weaknesses of G13 – yield and taste. To do that, they used a male Oregon Funk. The resulting hybrid, while it was indeed better in that its yield increased, was lacking in potency.

So, the next thing they did was to use Blue Dot to pollinate G13. Like the first one, the resulting hybrid bestowed the genetics of G13 with improved flavors while retaining its potency. However, it did not improve the yield.

Next, Dutch Flowers decided to cross the two descendants of G13 from Oregon Funk and Blue Dot. It worked like a charm because the resulting hybrid this time around fulfilled the goals of the breeder.

Blowfish, in essence, is G13 reborn. With the insanely powerful mind-warping effects of G13 and pleasant smell of Blue Dot all rolled into one strain, what could go wrong? As for the growers, the new hybrid now boasts of the traits that made Oregon Funk a voracious producer.

At up to 26% THC, Blowfish is incredibly potent. While it leans towards the Indica side, its cerebral effects remain pronounced.

Looking to buy seeds like Blowfish? Check out our marijuana seed bank.

It takes a little while before the strain makes its presence felt. Once it does, it often begins with a cerebral head high. As the effects intensify, not only do users feel euphoric, but most also would have random thoughts racing through their mind. At the same time, most of the users tend to be sociable. And then the Indica traits of Blowfish starts to trickle down to the body.

A tingling sensation ebbs from the back of the head down the spine inducing a numbing buzz that spreads all over the body to the extremities. Even as it sends users into deep relaxation, there is not let up in the mental high as some users now experience mind-bending psychedelic effects. Those who do not, though, are lost in their thoughts.

Without realizing it, users simply drift off to sleep at the backend of the effects. For this reason, it is best used at the end of the day when there is nothing else to do.

Blowfish is a beast when it comes to its potency and extreme effects. However, it is benevolent with regards to its pleasing scent. It has a delightful smell of citrus and berries with burnt incense and diesel undertones. Upon smoking, however, its smoke produces a pungent and harsh bouquet that may cause coughing.

As for the strain’s flavor profile, it has a rich sweet and sour taste that is apparent in both inhale and exhale. Some pepper note can also be felt as the tickling sensation envelops the mouth.

The good thing about smoking this hybrid is that it only has very few side effects. Dry mouth and eyes are a natural reaction to the use of cannabis. Blowfish, in this regard, is no different from others. Another condition that may occur is a mild headache.

Besides providing recreational users with a mind-warping high, Blowfish also has a high value in the medical cannabis community.

Looking to buy seeds like Blowfish? Check out our marijuana seed bank.

Already, the cerebral high delivered by the strain takes away the mind away from physical discomforts. Imbued with anti-inflammatory properties, it also helps soothe aching muscles. Add to that is numbing sedative-like traits, then it can reduce or take away pains caused by chronic diseases.

Blowfish also play a huge role in helping users cope with stress. Under normal circumstances, people need to clear their mind to feel calm. Under the influence of this strain, it is the other way around. With the way in which it alters the mood and sends the body to bliss, any troubling thoughts users may have simply disintegrated.

Finally, getting quality sleep is now possible. Patients recovering from illnesses and insomniacs, anyone who has trouble sleeping should find Blowfish an excellent nighttime companion.

Because Blowfish is a low-maintenance strain, it doesn’t require a significant deal of attention. As a result, it can still thrive and produce flowers in ultra-low nutrient levels. On top of that, it also isn’t vulnerable to contracting molds and diseases. Those are the marijuana’s features Dutch Flowers is most proud about, that it has the capability to survive even under difficult conditions.

Growers prefer to cultivate cannabis indoors not only because of privacy concerns. It is also the only way to grow plants in areas where the climate is not suitable. With Blowfish, the indoor flowering period falls between 8 to 9 weeks. Each square meter can have a yield of up to 16 ounces.

Blowfish will generate dense buds, glazed with snowy trichomes. Expect an average yield of 16 ounces or more per plant by the third to the fourth week of September.

What is the Blowfish strain yield?

How much THC does Blowfish have?

What are the origins of the Blowfish strain?

Blowfish was created from a mix between G13, Oregon Funk, and Blue Dot.

Have you ever smoked or grown your own Blowfish? Please let me know what you think about this marijuana strain in the comments below.