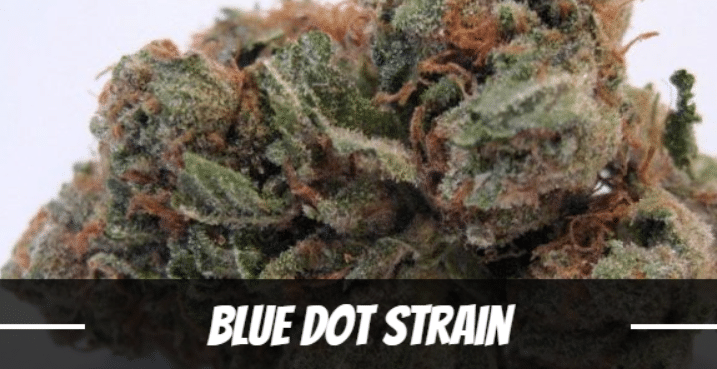 The varieties of cannabis in any given locality are all the result of the natural order of life. In other words, the breeds were not because of intervention. For the modern hybrids, however, these are the ‘designer strains’ bred for different reasons. Blue Dot, for example, may have come from an unknown breeder, but its purpose is clear and that it is for medical use.

Allegedly, it was a medical patient in the county of Sonoma in California who developed Blue Dot. Information is scarce, but one source cited its roots to be from White Widow, Skunk, Big Bud, Northern Lights No. 5. Formerly, it was also called Medical Grade Bud or MGB.

By all accounts, the modern-day iteration of Blue Dot is that it is a descendant of Leda Uno, Northern Lights, and Haze. It should also be noted that there might be versions using other strains. At any rate, like the original, it is clone-only.

Blue Dot, being Sativa-dominant, does deliver an exceptional mental high. However, it is the mellow body buzz the follows that makes it sort of special. Hopefully, a breeder can reproduce Blue Dot that makes its seed available.

If a person needs something to get their spirits up and help them get through the day, then Blue Dot is the perfect strain to use. Being Sativa dominant, its effects are mostly cerebral, especially in the beginning.

The high Blue Dot delivers does come in full force right away, and it is certainly not to be underestimated. Once it kicks in at the onset, it sends users on a euphoric cerebral high. It hits with an energizing buzz that kick starts people into action.

Some strains can induce hyperactivity but also cause a foggy mind. Blue Dot, on the other hand, inspires creative thoughts and mental clarity. Often, it helps people focus better on tasks. Feeling uplifted and generally cheerful, users tend to become sociable.

Even though it leans more towards its Sativa side, it doesn’t mean that its Indica traits do not have a role. As the cerebral high reaches its peak, the physical effects start to trickle down to the body. Soon, the warm buzz soothes aching muscled and promotes relaxation. While its physical high can be profound, it is not likely to cause a couch-lock.

Blue Dot emits a scent that is undoubtedly irresistible to users. It starts with a pungent smell with hints of earthiness. The good stuff, though, comes after the buds are broken. It then emits a sweet fruity fragrance that is tagged as similar to cherries.

When smoked, Blue Dot has flavors that are truly pleasant for most cannabis users. It produces a smooth pungent earthy taste. However, its smoke may cause some to have watery eyes. During the exhale, smooth berry flavor with notes of pepper tingles the tongue.

Being an intense strain, it’s adverse effects may come as more pronounced compared to others. Users may experience the usual dryness of mouth and eyes. However, there are others that may occur especially when one overuses.

Some of these conditions include having a mild headache. Others might feel a little anxious or paranoid.

As mentioned earlier, it appears that the reason for its existence is to bring comfort to medical cannabis users. Blue Dot can alter the mood and induce a euphoric feeling which benefits those who are suffering from mental illness. Patients with stress, depression, ADHD, and the like, will find it easier to relieve themselves from all the anguish due to their condition.

Looking to buy seeds like Blue Dot? Check out our marijuana seed bank.

Another use of Blue Dot is in providing comfort from pains caused by chronic illnesses. While it does not have much of the sedating effects of others, the mind shifts away from discomforts due to the cerebral high certainly helps a lot in this regard.

Blue Dot is a clone only strain. That is unfortunate as it virtually makes it impossible for anyone to cultivate it unless one knows someone who has a mature plant. If one were fortunate enough to obtain its clipping, then there is the choice of planting it indoors or outdoors.

This strain takes about 9 to 10 weeks to flower, but it is worth it. During harvest, it yields up to 12 ounces per square meter.

Blue Dot requires a semi-humid or dry climate around 72 to 80 degrees Fahrenheit for it to thrive well outdoors. The flowering period falls between the second to third week of October with yields of 12 ounces per plant or more.

What is the Blue Dot strain yield?

How much THC does Blue Dot have?

What are the origins of the Blue Dot strain?

Blue Dot was created from a mix between Leda Uno, Northern Lights and Haze

Have you ever smoked or grown your own Blue Dot? Please let me know what you think about this marijuana strain in the comments below.