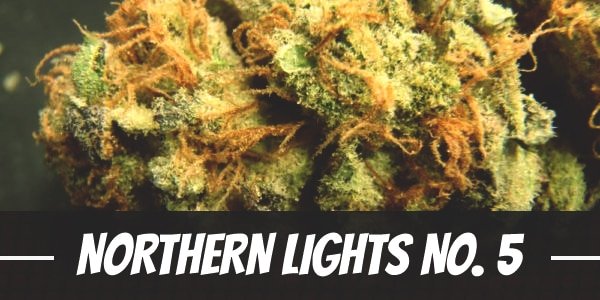 One of the most captivating things one could see from the sky is the Northern Lights.Indeed, the sight of dancing lights in the dark sky is a feast for the eyes. So, imagine when there is a cannabis hybrid named as such. The question is, does it measure up to the astronomical wonder?

As it turns out, Northern Lights, the cannabis strain, has been around for ages. Not only was it popular in the early 90s, but it also dominated the industry. A testament to the greatness of the strain is in its bagging of the High Time Cannabis Cup, several times.

Today, Northern Lights No. 5 is an improvement to the original strain with regards to its potency. In some ways, it is aptly named because once the physical body high hits, each of the billions of cells in the body rejoices.

No one knows the exact lineage of Northern Lights No. 5. From what we could gather, it traces its root to an Afghani Indica. But there are also others who say it is a cross between Afghani and an unknown Thai Sativa. It is a plausible theory as that would explain the presence of Sativa genes in the plant.

After taking the cannabis world by storm in the 90s, several breeders kept on working on improving the strain. For instance, BC Seed Company has worked on their version for more than two decades. Through inbreeding with the best phenotypes, they have released their variant of Northern Lights No. 5.

So, what can this strain do? One of the first things people notice when using this strain is that general mood swing. No matter how one is feeling, Northern Lights No. 5 seems to tilt the mood towards that of happiness, and in some cases, euphoria. Despite the low Sativa percentage, it also enhances creative thinking.

But soon after, the physical body high starts. For most people, the sweeping body relaxation is a good balance to the mental alertness. But there are also instances where it was reported by users that they start to perceive lights changing. Now we know why this weed is named Northern Lights. Because this hybrid does make one feel sleepy after using, it is best to use it at the end of the day.

Let’s get back to the subject of the Northern Lights phenomenon, which you see in an open area. Now imagine yourself in a field surrounded by grass, or even the forest. Now, take a sniff and blend in the sweet and citrusy fragrance. And that is how the strain smells, one that is exceptionally pleasant to the nose.

Upon inhalation, there is the unmistakable kush-like taste blended with sweet tropical fruits. Sounds great? Try exhaling and there is a hint of citrus, which a lot of people love.

Before smoking or using Northern Lights No. 5, it is a good idea to gulp down lots of water. Staying hydrated is one way to lessen feeling dry on the mouth, as this strain is known to cause that.

Other than dry mouth, there are not much concern about other adverse reactions, except in instances when a smoker is novice or one has used too much. In this case, some reactions could include dry eyes, a headache or feeling dizzy. On rare instances, there are those who are predisposed to anxiety issues that result in a slightly elevated level of anxiousness.

For the medical cannabis users dealing with stress and depression, and possibly other mental health disorders, Northern Lights No. 5 may provide relief. Aside from mental health, the strain is also used by patients suffering from pains as a result of different illnesses.

Other uses of this strain include reducing the severity of headaches, as well as helping people fall asleep.

Here’s good news for those who are new to growing plants. Northern Lights No. 5 is considered an easy strain to grow. It thrives well outdoor, as well as indoor. Of course growing outdoor could be a problem for some. If so, the best way to grow this plant is to use hydroponics.

To speed up the growing stage, one could also choose to use the Sea of Green (SOG) method. Doing so results in faster growth. The sooner, the better, right?

One of the reasons for the popularity of the strain is not only because of its wonderful effects. It is also because of the shorter harvest time. In as little as 6 weeks, growers could be harvesting around 14 to 18 ounces per square meter.

For the few people who could legally grow, and have the space to do so, the plant should be ready for harvest by mid-October. At this time, the expected yield should be around 18 ounces or even more per plant.

Have you ever smoked or grown your own Northern Lights No. 5? Please let me know what you think about this marijuana strain in the comments below.

2 comments on “Northern Lights No. 5 Strain”