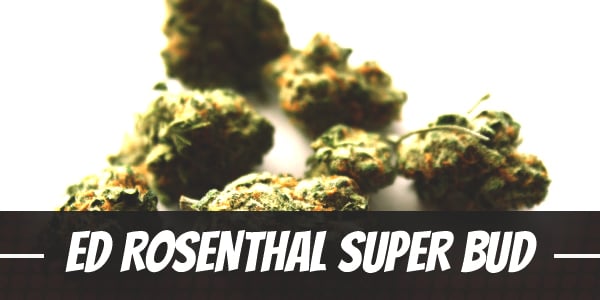 Cannabis growers and regular users should be familiar with High Times Magazine. For someone to be one of its columnists, that person has to be one with authority. One such person is Ed Rosenthal, a horticulturist, and a cannabis activist. He is best known as a champion of marijuana legalization and has authored books on cannabis.

When Sensi Seeds, one of the most recognizable seed banks and breeder of cannabis hybrids name a strain after Ed, then there must be something about the strain.

Called Ed Rosenthal Super Bud is an Indica-dominant hybrid that delivers an incredible balance of both cerebral and body effects. In a while, we will get to know more about this strain.

Almost all hybrids in the world are a result of crossing two strains. In some cases, there are three or four-way crosses. But none comes close to the Ed Rosenthal Super Bud.

Sensi Seeds used the best of the best by using SIX landrace pure strains of the highest quality. After generations after generations of layering, they finally created a strain from the original Ed’s Potent Evolved Hybrid (PEHT) Type 1.

Ed Rosenthal Super Bud inherited its Indica side from Afghani and South Asian strains. As for its Sativa side, it came from Thai, African, Mexican and Jamaican Strains.

Ed Rosenthal Super Bud can have as much as 23% THC. On paper, it is easy to assume that it is very potent. In fact, it is, but it is how it affects users that make it a strain that beginners may not want to try. Of course, that is a general statement and does not apply to everyone.

For recreational users seeking a hybrid that can deliver a high-energy buzz, Ed is not it. Instead, what it does is to induce relaxation like only a few strains out of thousands can.

It only takes a few tokes before its effects start to manifest itself. At its onset, the Indica side delivers a numbing body buzz that loosens up muscles. As users start to feel relaxed, the Sativa side also starts to work its magic.

Ed Rosenthal Super Bud is a potent mood-altering strain. Not only do users feel uplifted, but they also start to have a heightened sensation. While the body high continues to calm the nerves, and induce relaxation, users remain clear headed. In fact, most will also find themselves with an uncanny ability to focus better. At the same time, they are also able to think better and form ideas.

All the effects mentioned above assume that users only used a small amount of the strain. Meanwhile, feeling relaxed and in a good mood, some people also start to feel euphoric. As the body high continues to intensify, they now start to feel very tired. In some cases, users may find themselves now in deep introspection.

Ed Rosenthal Super Bud emits a sweet aroma that is also slightly pungent. It is also accompanied by a barely detectable hint of fruits. Because of its subdued scent, it comes off as very pleasant that most users would appreciate.

Ed’s aroma carries over to its flavors but this time, it also comes with a distinct taste of pineapple and citrus. Most users would describe its taste as delightful. In a few cases, some people tend to smoke a tad bit too much because of how it tastes.

Ed Rosenthal Super Bud is not the easiest strain to handle. As mentioned, it makes users feel extremely tired even after only a few tokes. It also brings with it a few adverse reactions.

One is that there are people who may feel anxious or paranoid. Having said that, it is now up to users to decide if this is a strain they would like to use. Other than paranoia, the other concerns are more familiar with the use of weeds.

Dry mouth and eyes, as well as mild dizziness, becomes pronounced with each extra tokes.

The uplifting cerebral effect, when coupled with the heavy body buzz, is effective in crushing stress. Furthermore, it can also be used to deal with depression and PTSD.

It is not the best strain for pain relief, but if it is mild, then Ed can take care of that. The intense buzz it delivers can also cause people to feel sleepy.

One reason why the strain is called Super Bud is because of the large and dense buds it produces. The buds are heavy and may need some form of support lest they break some branches due to its weight. But before one can get ahold of crystal-covered buds, it needs to be cultivated.

Outdoor, it grows well in a Mediterranean climate. Other than that, the best way to grow it is inside the house. Regardless if growers Chose soil as the medium or hydroponics, it grows almost as well as that planted in the garden.

Its buds may be large, but this marijuana plant is not a heavy producer. Flowering stage begins in 8 to 10 weeks with each square meter having a yield of 6 ounces.

In a sunny climate, Ed Rosenthal Super Bud can produce up to 10 ounces for each plant. It should be entering the flowering phase by the last days of September.

Have you ever smoked or grown your own Ed Rosenthal Super Bud? Please let me know what you think about this marijuana strain in the comments below.