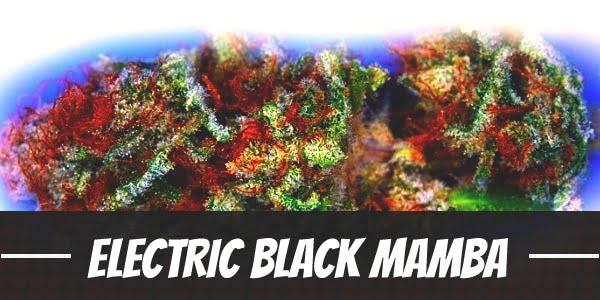 Electric Black Mamba delivers a surge of euphoria throughout the body with its potent THC levels of 24%. Its high lasts for hours, clearing the mind at the onset before gently cradling the body to bed. As its effects persist, users sense a heaviness that ultimately takes one to the land of dreams.

In creating the strain, breeders took Black Domina and crossed it with Purple Diesel. The latter influenced its slow-acting onset as well as its uplifting buzz that leaves users feeling happy throughout the day. Meanwhile, the former improved its growth profile and turned it into a fast flowerer with high yields and impressive trichome production.

While its head to toe high is widely recognized, Electric Black Mamba is actually a source of comfort to patients from the medical marijuana community. Its CBD levels are significantly higher than most recreational strains. Through it, and with its terpenes and THC, it temporarily manages symptoms of mental and physical health issues.

Electric Black Mamba is not a head-slamming strain that accidentally overwhelms users in a daze. Rather, it is a slow-starter. Much like many Indica-leaning buds, its effects do not start until 15 or 20 minutes have passed since the first toke. For this reason, it is best to start with low doses and gradually build up the high.

During the onset, it starts with buzz of euphoria that swarms the mind. It clears the mind and brings back pleasant memories, leaving users feeling happy from within. Although gentle, the mental stimulation extends to the stomach. As such, it is best to have some snacks ahead of time before the heavy-hitting physical buzz hits and keeps one from moving around. Otherwise, one will be lulled into deep relaxation while feeling hungry.

After about an hour or two, a tingling sensation trickles down from the temples.  It relaxes the body by surging through the muscles and removing tensions. In all likelihood, users will flop on the couch or lay on the bed feeling thoroughly relaxed. Planting itself in the limbs is Mr. Sandman’s invitation, a heaviness that makes the eyes droop.

The tingling buzz usually ends in a deep sleep that one wakes up from the next day. For some casual users, however, the freedom from physical inhibition that it brings can be an arousing experience. Its natural aphrodisiac qualities set the tone for a night of fun with one’s companion.

Electric Black Mamba has a sweet fragrance layered by overtones of nuts and undertones of wood. Accentuating it are fruity notes of blackberry as well as a tangy skunk that is released once the buds are broken apart or combusted.

Electric Black Mamba has a sweet hint of blackberry that entices the palate at the first swig. Undertones of sour skunk, along with traces of nuts, enhance the fruity of overtone. On the exhale, it leaves a woody aftertaste of pine.

Regardless of the strain, users will always experience the inevitable dry eyes and cottonmouth. At times, it is accompanied by dizziness too. Regardless, the side effects are usually mild and barely noticeable. Moreover, it can be easily mitigated by downing a few glasses of water throughout the day. Avoiding caffeinated and alcoholic drinks will manage the dryness as well.

Although rare, Electric Black Mamba’s heightened sensory experience can lead to a subtle feeling of paranoia. Although it is confined to a temporary headache most of the time, users should still moderate consumption of the bud.

Stress relief is one of the most commonly cited reasons for using cannabis. To this end, Electric Black Mamba works well. It delivers a happy onset that improves mood while calming fast-paced thoughts. Its soothing euphoria also helps manage symptoms of depression, anxiety, and other mental health issues like PTSD.

Its cannabinoids, in particular, its up to 2% CBD, provide relief to patients dealing with chronic pain either as a result of disease or disorder. By relaxing the body, it keeps the muscles from uncontrollably contracting and causing pain. In this way, it invigorates one from various aches beginning from the temples. Sleep helps cells regenerate faster while stabilizing hormones. As such, it is an essential part of the healing process. Through its sedating properties, it improves the quality and quantity of sleep, so one wakes up the next day feeling of refreshed.

Electric Black Mamba has thick stems and equally hardy branches. For this reason, it is a great beginner’s strain that can be grown on a farm or garden. Its resistance to fluctuations in temperature and changes in weather allows it to thrive in the northern hemisphere where the climate is usually cold.

Indoors, growers will need to prune Electric Black Mamba. Its dense foliage and broad fan leaves sometimes block light and interfere with air circulation in the lower nodes. By removing branches and leaves, one can prevent moisture from seeping into its crevices and developing into mold or mildew that stunts its growth.

It works best with the Sea of Green method due to its short height and compact structure. Growers can place at least four plants in a single square meter to maximize yields in small spaces. Pairing it with a hydroponics setup will further improve turnouts as it delivers nutrients straight to the roots. However, using soil as a medium will enhance its flavors.

Indoors, Electric Black Mamba has a flowering period of 7 to 9 weeks. It yields between 10 to 12 ounces of buds per square meter at full maturity. Under the expert hands of seasoned growers, it produces higher turnouts.

Electric Black Mamba matures from the last week of September to the second or third week of October. At harvest, growers can expect at least 12 ounces of buds per plant.

Have you ever smoked or grown your own Electric Black Mamba? Please let me know what you think about this marijuana strain in the comments below.