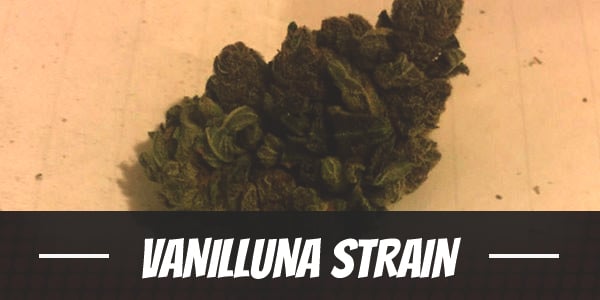 DJ Short is among the most celebrated breeders in the industry. His work includes producing the prominent Blueberry, which continues to be an influential strain despite hitting the markets in the 1970s. This should come as no surprise though. After all, it delivers a tranquilizing body high that cradles users to the land of dreams.

Among the varieties that were produced in the process of creating Blueberry is one that leans toward Sativa. Taking the original Indica-dominant original, DJ Short crossed it with the former and developed the well-balanced hybrid Vanilluna.

Vanilluna is a delicious strain that entices the palate with its sweet, creamy smoke. Enhancing its appeal are its long-lasting, head-to-toe high that begins in the temples as a soothing buzz of euphoria before spreading to the rest of the body as a wave of relaxation. It is also because of this quality that many medicinal users turn to the 50/50 bud.

Because of its potency, first-time users should be wary of consuming Vanilluna. Using beyond one’s personal limits can lead to a couch lock while one develops a keen awareness. By keeping consumption in moderation, one can avoid the overwhelming, heavy-hitting effects of the bud.

At the onset, it delivers a euphoric high that brings smiles back to one’s face especially after a hard day at work. It inspires a happiness from within that keeps one feeling upbeat for hours on end. Because of this, it has great recreational potential.

It takes about an hour or two for Vanilluna’s bodily effects to begin. Starting as a light pressure in the temples, it gradually trickles down in soothing waves and kneads the muscles. As it persists, it blankets users in deep relaxation.

In spite of its stimulating head high, it is best reserved for nighttime use. It has a sedating comedown that makes it difficult to keep the eyes open. Eventually, as a heaviness plants itself in the limbs, users are cradled gently to sleep.

Vanilluna has a sweet blend of ripe fruit, honey, and vanilla sticks. Also present are floral notes of lavender. Broken apart or combusted, subtle undertones of blueberry and melon fill the room.

Vanilluna’s smoke coats the palate in a creamy smoke with saccharine undertones of vanilla, blueberry, and melon. Its honeyed sweetness is accentuated by a floral undertone which leaves a lavender aftertaste on the exhale.

Dryness in the eyes is an uncommon side effect of marijuana regardless of the strain, method of consumption, and dosage. At times, it is accompanied by a cottonmouth as cannabinoids begin to interfere with the production of saliva. Both are mild and barely noticeable but users may down a few glasses of water throughout the day to mitigate the symptoms if it continues to persist.

Vanilla Kush strain is a Holland-born flower, thoroughly impressing users with its delicious aroma and calming and yet stimulating effects.

Consuming beyond one’s THC tolerance can also green users out. It is characterized by heightened sensory experience that can either lead to a temporary dizziness or trigger anxiety. In worst case scenarios, it can lead to a subtle feeling of paranoia. As such, users should always use the bud in moderation and start with low dosages.

Vanilluna is an impressive recreational strain. However, it is also an effective therapeutic bud that provides comfort to patients dealing with mental and physical health issues. Its terpene profile also invigorates the senses.

It delivers a happy high that temporarily drowns out negative thoughts while enhancing the mood. In doing so, it balances out stress levels and manages symptoms of depression and other mental health issues like PTSD. Meanwhile, its anxiolytic properties induce a soothing euphoria that slows down fast-paced anxiety.

Its high levels of THC, along with CBD content, contain analgesic qualities that relieve pain all over the body beginning from the temples. As such, it is a great headache reliever. Among its best uses is tranquilizing intraocular pressure, a symptom of glaucoma.

Along with anti-inflammatory properties, its relaxing effects prevent the muscles from suddenly contracting while reducing swelling. At the same time, it also appeases redness in inflamed areas.

Vanilluna has a similar structure to many Kush strains. It has a single main stem and is relatively tall. Not to mention, it has broad fan leaves and a dark green hue that accentuate its overall look.

Growers can also choose to grow the plant inside controllable environments where it is easier to adjust factors like lighting, humidity, and temperature. Pruning is a necessity though. Its compact structure, as well as sizeable broad fan leaves, can sometimes inhibit the circulation of light and air in the lower nodes. If left unattended, it can harbor moisture in between its crevices that will develop into mold or mildew and stunt the plant’s growth. Installing a proper ventilation system will also increase aeration while reducing humidity levels.

Both the Screen and Sea of Green work well with Vanillula. It has enough space between its internodes for growers to bend and weave its lower-end budding sites into a screen to create an even canopy that catches the light. One may also place multiple plants in a single square meter to maximize space. Regardless, both plant training methods will help create more budding sites.

TIP: Buy seeds like Vanillaluna at my seed shop

Another way to raise yields is to use a hydroponics setup wherein nutrients are transported directly to the roots. In this way, the flowering period is hastened while significantly impacting the production of yields. For better flavors, growers may also stick to using soil as a medium. It improves terpene profiles and helps plants produce a more distinct scent.

During the flowering period, it produces dense buds that taper on one end. Its spade-shaped nugs sport a forest olive hue that looks stunning against a backdrop of deep green foliage. Adding to its overall appeal is its impressive trichome production which coats it in a thick blanket of resin that sparkles when shined.

The well-balanced hybrid has an indoor flowering period of 7 to 9 weeks. After the short wait, growers can harvest between 12 to 14 ounces of buds per square meter.

Vanillaluna matures from the end of September to the second or third week of October. Once ready for harvest, growers can expect yields of at least 14 ounces of buds per plant.

Have you ever smoked or grown your own Vanillaluna? Please let me know what you think about this marijuana strain in the comments below.