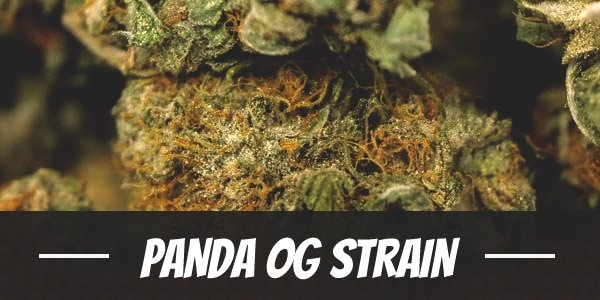 Panda OG is a delightful bud that appeals best to enthusiasts with an inkling for chemical-flavored strains. It has sour diesel undertones accentuated by the saccharine undertone of fruits. In drawing in its smoke, users experience a long-lasting high with a cerebral onset and a heavy-hitting comedown.

In creating the strain, Phat Panda used the legendary OG Chem as a genetic base. Apart from its terpene profile, it also contributed to Panda OG’s stimulating head high and mood enhancing effects. It was later crossed with another Sativa-leaning strain Berry Sour Cream which smoothed out its smoke while adding to its body buzz.

Panda OG is a potent strain with THC levels of 18% to 19%. At times, it can be intense enough to lock users to the couch. However, staying within limits ensures the experience is pleasant throughout the long-lasting high.

During the onset, it induces a euphoric rush that clears the mind. It enhances the mood while bringing back happy memories. The upbeat disposition, as well as mental clarity, transform one’s perspective of the workplace. It allows thoughts to flow and form freely into ideas, igniting creativity.

After about an hour or two, its Indica effects begin to manifest. It is a light pressure that trickles down from the temples and surges throughout the body, soothing and tranquilizing. It undoes knots in the muscles while releasing tension before leaving users blanketed in deep relaxation.

Overall, Panda OG is a great strain to use in the late afternoon or early evening after work. It releases the stress accumulated throughout the day or week and places one in the mood for deep relaxation. Still, one can use it in the morning in moderation for its wake-and-bake qualities.

Panda OG is a pungent strain that can fill the room with its chemical aroma once a bag of its buds is opened. It has subtle undertones of berry that contribute to its sweet but sharp scent. Breaking apart its nugs produces a spicy fragrance with a tinge of damp soil and herbs.

A swig of Panda OG entices the palate with its sweet and sour blend. It has an earthy undertone that is accentuated by the fruity taste of berries. On the exhale, it leaves a spicy aftertaste with hints of herbs.

Using Panda OG always leads to dry eyes and a cottonmouth as cannabinoids continue to interfere with saliva production. Although unavoidable, users can still manage the effects by staying hydrated throughout the day. Another way is to avoid caffeinated and alcoholic drinks.

Although rare, excessive use can lead to a keen awareness that triggers anxiety. Most of the time, however, it is only limited to temporary dizziness or a headache. Still, users should prevent it by using with caution.

Presumably, Panda OG is a recreational strain. Still, it contains significant therapeutic value that helps patients manage symptoms of various afflictions. Among its best uses is reducing stress with its happy high. It calms the mind with its soothing euphoria while enhancing the mood. Because of this, it can also be used as an anti-depressant against depression, PTSD, and anxiety.

In stimulating the mind, Panda OG also brings back the appetite. For this reason, it is a great companion for patients dealing with eating disorders like anorexia as well as cachexia as a result of a disease. However, before it stimulates the stomach, it first soothes any pain that prevents people from enjoying a meal.

With that said, THC contains natural analgesic properties that relieve pain and aches all over the body beginning from the temples. It relaxes the muscles to keep it from uncontrollably contracting and causing pain. As the tranquilizing effects persist, a sedating buzz leaves users feeling drowsy until one eventually falls into a deep, unencumbered slumber. Through it, the quantity and quality of sleep are enhanced.

Panda OG brings out the best qualities of its Indica and Sativa genes. It is sturdy and relatively tall. Not only that, it is quite sturdy. Its thick stalks and branches have a strong resistance against unpredictable growing factors like fluctuations in temperature or changes in weather in spite of its propensity for a sunny and dry climate.

Although it thrives in the northern hemisphere, it is best for one to invest in a temporary enclosing that can be installed during early frost or late falls. Otherwise, it can stunt the plant’s growth or ultimately kill it. For this reason, many prefer cultivating the strain indoors where one can manage factors like temperature, lighting, and humidity.

A versatile strain, it can adapt to both the Sea and Screen of Green method. Growers may choose to take advantage of its compact structure by planting more in a single square meter or weave its branches to a net for even light distribution. Regardless, the two plant training techniques will encourage higher yields.

Soil is a great medium to choose if one prefers to enhance fragrance and flavors. However, a hydroponics setup will hasten the flowering period as it delivers nutrients directly to the roots. Hence, it significantly increases bud turnout while creating more budding sites.

Panda OG has an indoor flowering period of 8 to 10 weeks. Once ready for harvest, it produces between 12 to 14 ounces of buds. Under the hands of a seasoned grower, however, it can yield even higher.

When cultivated in the northern hemisphere, growers can see expect Panda OG fully mature between the second to the last week of October. Each plant yields at least 14 ounces of buds.

Have you ever smoked or grown your own Panda OG? Please let me know what you think about this marijuana strain in the
comments below.