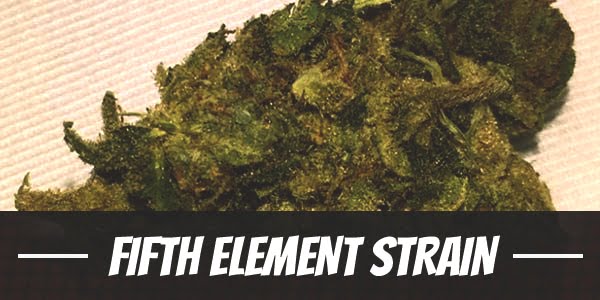 The Fifth Element is a thought-provoking science fiction movie. It follows the story of Leelo as she seeks out to combine with four elements with the help of Korben Dallas. The film is a fun, imaginative ride that exercises the mind with its twist and turns.

Equally mentally stimulating is the Indica-leaning strain named after it. The Fifth Element has a soothing psychedelic buzz induced by its THC levels of 22% to 28%. It clears the mind and kneads the muscles. Enthusiasts may also adjust the dosage to turn the bud into a deeply relaxing sleep aid.

In creating the strain, breeders used All Spark OG and Blackberry. The latter is a well-loved bud with the high of a Sativa and the structure of an Indica. Meanwhile, the former is a finicky plant in the growing room that benefited a sturdy frame from the cross. Among its best merits is its medicinal benefits and short flowering period.

The Fifth Element, compared to other Indicas, has a relatively quick onset that starts within minutes after the first two to three puffs. It starts off with an uplifting buzz that spreads all over the mind. Almost instantaneously, there is a noticeable change in behavior. It leaves users feeling happy throughout the day.

One of the best ways to enjoy the Indica-leaning strain is during brunch or an early dinner with friends. Preferably, at a restaurant near home or in one’s kitchen since it is likely that its Indica effects start crashing by the end of the second or third hour.

Soothing the body is what is left of the initial rush of euphoria. A light pressure builds around the temples. It smooths creases in the forehead, like ironing a freshly laundered piece of cloth, before making its way down to the toes through the muscles. Ebbing and flowing all over the body is a wave of relaxation that lulls users to tranquility.

Although intense, it rarely locks users to the couch. Au contraire, its ability to relax the muscles results in an invigorating limberness that allows users to move flexibly. Moderation is essential though.

Due to its high levels of THC, Fifth Element is extremely pungent. Its earthy aroma fills the room almost instantly after opening a bag of its buds. Breaking it apart, on the other hand, introduces the sharp scent of hash along with the aroma of sour lemon. Upon combustion, a woody pine takes over.

Fifth Element’s smoke is harsh. Drawing it in can lead to coughing especially as its sharp hash coats the tongue. However, it is later replaced by the citric taste of lemon blended with a refreshing pine and a hint of cedar. On the exhale, it leaves an earthy aftertaste.

Red eyes and a cottonmouth are two common reactions to Fifth Element’s moisture-inhibiting cannabinoids. Along with it is the slight possibility of a disorienting dizziness as a result of the long-lasting dry spell. The effects are usually mild, but users may still ease the discomfort by downing a few glasses of water.

Although rare, it is possible for users to experience a subtle feeling of paranoia followed by a headache a few hours after. Its main cause is overconsumption but one’s disposition before the high can also be a contributing factor. It is better to avoid the strain when the latter is the case.

The Fifth Element has significant therapeutic value to the chronically stressed and patients with diagnosed mental health issues like anxiety, depression, and PTSD. Its onset, for instance, is a mood-uplifting high that instantly enhances the mood. It strengthens conviction and raises confidence, ridding users of doubt and overwhelming feelings of hopelessness. Meanwhile, its gentle euphoria calm worries caused by problems at work, school, or life in general.

Although subtle, its invigorating head high stimulates the appetite. It encourages users to eat heartily while simultaneously soothing the stomach so food travels down faster and smoother. In this way, patients need not regurgitate any of the meals taken before or during the session. For this reason, Fifth Element is not only a source of reprieve for patients with eating disorders like anorexia, but also for long-sufferers of chemotherapy’s nauseating effects.

Eventually, the sense of tranquility turns into a heavy-lidded buzz. This is not a setback. After all, adequate rest hastens the healing process. With its sedating properties, Fifth Element takes users to bed early while also enhancing the quality and quantity of sleep.

The Fifth Element is a sturdy strain. Its thick stalks are rarely intimidated by a soft gush of wind blowing through it. Instead, it aids in its ability to withstand unpredictable growing factors like low temperatures. Because of this, it performs well when cultivated in a farm or garden in the northern hemisphere.

It can also be grown indoors due to its compact structure. Controllable environments also offer quick adjustment of factors like temperature, lighting, and humidity. Applying growing techniques is also much easier as the plants stay short.

The Sea of Green is the best growing method to pair with Fifth Element. It maximizes its manageable stature and the small growing area. It will require planting at least four plants in a single square meter to enhance bud production.

Pruning is also essential, especially when cultivating the plant in an indoor growing environment. Its dense foliage can get in the way of light and air circulation in the lower nodes. Removing dead branches and leaves streamlines nutrient distribution to the healthier budding sites.

Fifth Element has a short indoor flowering period of 7 to 8 weeks. Extending it by a week will further enhance yields but may soften its strong flavors. Regardless of one’s choice, it will produce between 10 to 12 ounces of buds per square meter.

A quick-flowering strain, Fifth Element blossoms from the last few days of September to the middle of October. Growers can expect at least 10 ounces of buds per plant at harvest.

What is the Fifth Element strain yield?

How much THC does Fifth Element have?

What are the origins of the Fifth Element strain?

Fifth Element was created from a mix between Blackberry and All Spark OG.

Have you ever smoked or grown your own Fifth Element? Please let me know what you think about this marijuana strain in the comments below.