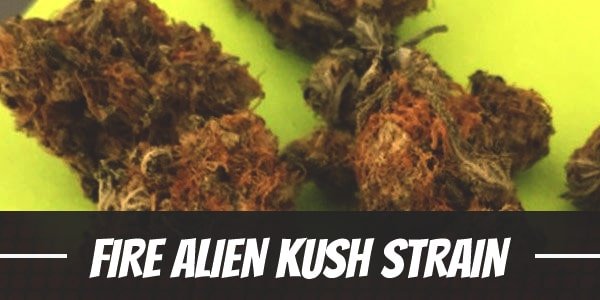 Upon getting ahold of a fine Fire OG specimen, OG Raskal Genetics set itself to produce an improved version of the bud. And what better way than to pair its stimulating head high with a relaxing comedown that gently cradles users back to earth? To this end, Alien Kush fit the role perfectly. It enhances the initial cerebral onset with a tranquilizing, stress-crushing physical effects.

Fire Alien Kush perfectly represents the legendary high of its parents. Apart from its psychedelic buzz, its well-balanced genetics also express itself in different phenotypes with each leaning toward a different side of the spectrum. Regardless, each sample carries mixed traits of either descendant.

Moreover, all deliver a similar experience in spite of the slight changes. With its potent THC levels of 20%, Fire Alien Kush delivers an all-encompassing high that takes users on a leisurely and spacey trip. Its pleasant effects also have therapeutic benefits appease a myriad of afflictions.

Fire Alien Kush skyrockets the mind to space with an uplifting cerebral buzz minutes within the first two to three puffs. It leaves users feeling happy as it clears away negative thoughts. The rush of euphoria also enhances one’s focus so users stay engaged on tasks without being distracted.

After about an hour or two, the same uplifting buzz begins to trickle down from the temples. It spreads relaxation all over the body through its soothing buzz. Though it leaves behind a barely noticeable heaviness, it is enough to free one of tension without sedation. In all likelihood, it is possible for some to get locked on the couch especially when using beyond individual tolerance.

In moderation, however, it simply enhances the initial head high’s mental stimulation by keeping tiredness or fatigue at bay. Feeling functional, users move with a fluidity while working on papers or projects. Even as the effects wane, one remains completely productive.

However, nothing short is expected of the well-balanced hybrid. Regardless of what time one chooses to take a hit of the herb, it will blend perfectly well with its cerebral Sativa uplift and soothing Indica comedown.

Fire Alien Kush has an aroma akin to Pine-Sol. It is pungent with overtones of woody pine emanating from its buds. Broken apart or combusted, subtle undertones of lemon, spices, and earth.

Drawn in, Fire Alien Kush swarms the mouth with a flavor of sweet berries and pine. An herbal undertone is evident especially when savoring the strain. However, its woody pine overtones as well as a tinge of wet soil wash over the palate on the exhale.

Fire Alien Kush increases anxiety levels in high doses. At times, it can develop into a subtle feeling of paranoia. Thankfully, it is easily avoidable through pacing and moderation. A more unavoidable reaction to using marijuana are dry eyes and a mild cottonmouth, especially as moisture-inhibiting cannabinoids interfere with the production of saliva. In the rare cases that one does feel bothered, downing a few glasses of water will help ease the ache.

A vast majority of consumers use cannabis to temporarily relieve stress and anxiety. This is because, apart from delivering a happy high, it has anxiolytic properties that calm the overwhelming dread as well as slow down fast-paced thoughts. By doing so, the herb also serves as a wonderful anti-depressant that helps manage mental health issues with a depressive component such as depression and PTSD.

In high levels, the same psychoactive compound turns into a natural painkiller. It relieves users of aches and pains beginning from the temples including headaches. Additionally, it also works well for reducing migraines to a certain degree.

Once the effects of the hybrid begin to wane, a drowsiness takes over and envelops the body in relaxation. As a result, patients with insomnia can use the bud as a sleep-aid. Apart from helping users drift off to bed, the herb also enhances the quality and quantity of sleep.

Fire Alien Kush produces various phenotypes which are all set apart by its stems thickness. For example, some take on a more Sativa structure with its lanky structure and propensity for growing vertically. Meanwhile, others are much sturdier, shorter, and boast a more Indica stature. Normally, however, all grow to a medium height and thrive in warm areas.

In spite of this, it adapts well to a diverse number of growing practices due to its perfectly split genes. Although, with regard humidity, growers have to take extra precautions to keep it from seeping into crevices so it does not develop into mold or mildew.

Outdoors, the lankier phenotypes must be supported with stakes against strong gusts of wind that may break its stems. The extra support will also keep branches from rupturing into two. Apart from this, growers may also opt to thin out the plant which also helps with improving light and air circulation.

In controlled settings, growers should top it early to keep it short. Utilizing methods like Sea or Screen of Green will improve yields as well. If possible, it is also best to water each plant with mineral-rich liquids. When regard to mediums, hydroponic systems will produce ‘cleaner,’ healthier buds that are free of pesticides but soil brings out its full flavors.

After initiating the flowering stage, it takes 8 to 9 weeks for Fire Alien OG to fully bloom indoors. Growers usually harvest between 12 to 14 ounces of buds per square meter. But, under the care of an expert, it is possible for it to flower earlier with more yield.

Garden and farm grown Fire Alien Kush usually flowers from the last week of September to the middle of October. It typically yields at least 14 ounces of buds per plant regardless of the weather.

Have you ever smoked or grown your own Fire Alien Kush? Please let me know what you think about this marijuana strain in the comments below.