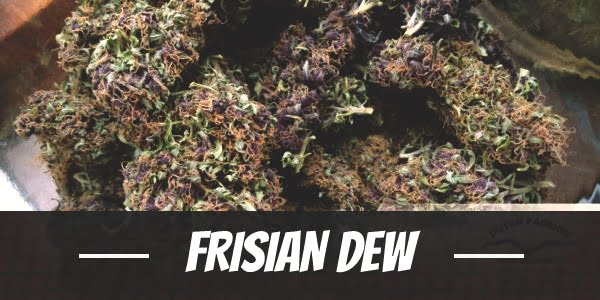 Dutch Passion Seed Company has been around for decades. It is also among the most recognizable names in the industry. After having won countless awards worldwide, one would think that they have seen it all. Apparently, though, that is not always the case especially when they first laid eyes on the Frisian Dew.

For more than 20 years, the breeder has been developing new hybrids using Skunk and Purple. But Frisian Dew, a cross between a female Super Skunk and a male Purple Star was a revelation.

It is, in their own words, “the most beautiful outdoor variety we have ever encountered.”

Besides its appearance, Frisian Dew should appeal to recreational users looking for a strain that can provide a high-octane, energetic high followed by soothing body relaxation. Even medical cannabis users, no doubt, would find a good use for it as it does come with pharmacological value.

Frisian Dew, by all means, is not the most potent strains in the market. Still, it does come with as much as 16% THC. And, it is fast-acting too. Almost as soon as taking the first toke, a reinvigorating buzz comes crashing in resulting in users have a clear head and sharper focus. At the same time, it enhances the mood by inducing a euphoric sensation.

Feeling energetic and happy, users tend to be more productive. Creators of content, in particular, should find it invaluable as it promotes creativity.

Meanwhile, after some time has passed, a warm and tingling sensation trickles down to the body. Soon, the physical effects of the strain start to make its presence felt. A soothing feeling envelopes the users and puts them at ease.

Used moderately, Frisian Dew is not the type of strain that takes people to the edge of the world and beyond. In other words, it does not cause psychedelic or narcotic-like effects. A word of caution though. Never underestimate the potency of cannabis as using too much can become overwhelming.

Frisian Dew comes with an earthy and skunky blend that is reminiscent of its Skunk lineage. It is also accompanied by a piney and woody note. Most people should find its exotic scent enticing especially after the breaking the bud for that is when its aroma becomes more pronounced.

While its scent may come on as strong, it carries over to its taste but in a subtle way. It has a herbal tea quality to it followed by a sweet note.

Although deemed as a gentle enough strain by modern standards where many new hybrids come with insane THC, Frisian Dew can have more pronounced adverse. In particular, users have reported feeling dizzy with its use. A few have also noted how it made them feel a little bit anxious or paranoid. These conditions may or may not occur, but that is dependent on the conditioning and tolerance level of individual users.

At any rate, even when using only a small amount, it can make users experience having dry mouth and eyes.

Over the years, more states and nations are warming up to the legalization of medical cannabis use. While most medicinal benefits are anecdotal, its use among patients suffering from epilepsy and seizures are proven. Unfortunately, the CBD range of Frisian Dew is not high enough. However, it more than makes up for with its pain-relieving properties.

An argument can be made against the use of drugs to control pain especially among those with chronic illnesses. As an alternative, marijuana such as the Frisian Duck can provide comfort and make life more tolerable for people with health issues.

As mentioned earlier, the Indica traits of the strain creep into the body and induce body relaxation. Among that different thing it does is to soothe aching muscles. In turn, it leads to stress-free bliss. As a mood-enhancer, it helps people coping with emotional issues (or even psychological) to focus on the positive instead of wallowing in self-pity.

According to Dutch Passion, Frisian Duck thrives in the outdoors. It is quite resilient and can tolerate the cooler climate. Also, it is a sturdy plant. Despite its massive buds, the likelihood of needing support is minimal or in many instances, unnecessary.

Most people opt to cultivate cannabis indoors for obvious reasons. Under expert care, it should grow just as well or even better than when planted outdoors. It has a quick flowering period that starts in the 8th week. Each square meter, during harvest, can have as much as 12 ounces of buds.

The backyard or the garden is the best place to plant Frisian Dew. Of course, that is assuming it is legal, and privacy is not an issue. Typically, the plant starts transitioning to the flowering stage in the first week of October. Each plant is likely to produce 12 ounces of buds or more.

Have you ever smoked or grown your own Frisian Dew? Please let me know what you think about this marijuana strain in the comments below.