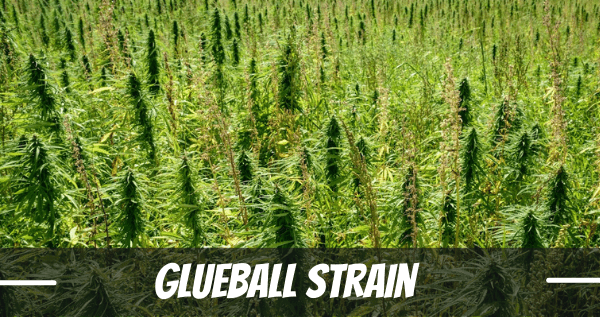 Glueball, aka Gluebal and Glue Ball, is a popular marijuana strain with a somewhat mysterious origin story. Though many sources claim the original breeder has yet to be named, others list Ethos Genetics as the masterminds behind the strain. Wherever it originated from, it’s clearly here to stay, with even the likes of Lil Wayne attaching themselves to this masterpiece.

The rapper, who launched his cannabis brand GKUA Ultra Premium in December 2019, prides himself on carrying only top-quality cannabis products. So when we found out Glueball was one of the strains he stocks, we knew this one lived up to the hype.

The layer of trichomes is thick and resinous, almost like a coating of crystallized honey. Its characteristics are just as puzzling as its background story, with many debating if the Glueball strain is indica or sativa.

There is some debate surrounding its THC levels. Though figures vary from batch to batch, we know it’s high, sitting somewhere between 20% and 26%.

It’s been said that some phenotypes contain as little as 13% THC, but there is little data to support this claim.

Glueball is the result of crossing Original Glue (aka Gorilla Glue) and Snowball, both known for their hard-hitting and enjoyable effects.

Are the effects felt from the Glueball strain indica or sativa? Well, it’s hard to say. While many reported feeling sedated but not unfocused, others said the opposite. The quickest answer is that it’s both – but not at the same time.

Most commonly reported as a balanced 50/50 hybrid, some phenotypes have shown a slight indica lean, with a 60% indica 40% sativa split. Not that it matters. The effects of both sides come in strong.  Glueball’s remarkable lineage goes beyond its impressive parents – the effects also stem from Chemdawg, The White, and OG Kush relatives.

Gorilla Glue #4 is a powerful stress-reliever and is therefore widely used in the treatment of depression and anxiety. Read our full review!

You’ll experience an elevated, uplifted high first, which will take effect almost immediately. You’ll be so euphoric and giggly you won’t even notice the sedation lurking in the shadows, but you’ll be nose-diving back to earth before you know it.

Once the initial rush settles, you’ll be left feeling tingly all over and become glued to the couch, blissfully unaware of the world around you. It’s at this point your focus dwindles into a free-thinking, mental stone.

Glueball delivers a hard-hitting, long-lasting high that crashes into your body and mind with reckless abandon. On top of being relaxed, you can also look forward to feeling completely at ease in yourself, both mentally and physically

Glueball is an aromatic strain with a diesel-like odor that can become quite pungent.

It’s cut with undertones of zesty citrus and fresh, woody pine that save it from being completely overwhelming, though it can be off-putting if you’re used to the fruitier strains.

New users are more likely to find the scent unappealing, while more experienced users claim the smell is a welcome testament to the potency of the strain they’re about to enjoy.

The taste is quite similar to the fragrance, but it’s the zesty citrus and fresh pine that comes through most on the inhale, becoming more pronounced the more you smoke.

The notes of diesel, which start as a subtle hint of flavor in the background, come through at the end, completely dominating the exhale to provide the aftertaste. You’ll also detect notes of cheese, plum, and mint.

Given what we know about the Glueball strain of marijuana, it’s not surprising one of the potential adverse effects is couch-lock.

The Glueball strain is fast-acting, with just one hit being all you need. So while you may not be able to avoid that lazy, sleepy feeling entirely, you can reduce your risk of complete sloth status by limiting your intake and pacing yourself.

You may also experience dizziness, lightheadedness, irregular or rapid heartbeat, and mood swings. Some users have also said that they felt more anxious.

If you experience any of these reactions, remember to stay calm, take a few deep breaths, and find a way to ground yourself. The 5-4-3-2-1 technique works well, and you can search for it easily online.

Less daunting adverse reactions include dry eyes, dry mouth, hunger, and thirst. Stock up on your favorite foods and snacks to curb those cravings and keep plenty of water nearby. And I do mean plenty.- Although most potent strains cause thirst, Glueball will leave you feeling like you’ve never had a sip of water in your life.

Glueball strain info is relatively scarce, especially when it comes to cultivation. You’d be hard-pressed to find a Glueball strain review that provides extensive insight into growing the Glueball weed strain. While this can pose a challenge, especially for newcomers, more experienced growers have advised looking to the parent strains for guidance.

Original Glue and Snowball are both easy to grow, and it’s believed that Glueball is no different. Still, if you’ve only recently discovered your green thumb, it’s best to consult with a skilled grower first.

The Glueball strain of marijuana enjoys warm and humid climates and is considerably resistant to pests and mold. It does develop dense buds, however, so some maintenance is required. Pruning the plants often will increase ventilation and expose the middle and lower nugs to more light.

Not only does this encourage growth, but it reduces the risk of excessive moisture build-up. The plants can be grown indoors and outdoors, but indoor growers must accommodate for the plant’s fragrance.

A carbon filter and inline fan can help you expel some of the smell, but be careful not to lose too much heat. Use our guide for some temperature management tips.

The Glueball weed strain is available as seeds and clones but can be difficult to source.

The flowering period is usually 9-10 weeks, though some data suggests plants can reach maturity as early as 8 weeks. Yields are up to 1 Oz/Ft2.

Yields are said to be up to 18 Oz/Plant when grown in ideal conditions. Your crop should be ready to harvest around late October.

Download my free marijuana Grow bible so you can grow your own Glueball strain!

How can I get the highest THC from the Glueball strain?

Maximizing the THC content in your yield comes down to timing, maintenance, care, and environment. Refer to our handy guide for tips on knowing when to harvest.

Is the Glueball strain indica or sativa?

Glueball is a somewhat balanced hybrid with both indica and sativa components. Glueball is unique in the way these traits appear, and this is where most of the confusion arises. Imagine an effects scale, with sativa being at the top and indica being at the bottom. Most non-dominant hybrids offer a reasonably balanced high, meaning the effects land somewhere in the middle of this scale. On the other hand, Glueball delivers a high that starts at the top (sativa) and travels down to the bottom (indica). In layman’s terms, you’ll first feel elated, energized, and focused before becoming lazy, unfocused, and sedated.

What is the Glueball strains terpene profile?

Information regarding the exact terpene makeup is scarce. One source noted the terpene profile includes myrcene, humulene, and caryophyllene. Other sources noted the flavor and smell associated with terpenes – pine, citrus, and diesel. While we can neither confirm nor dispute any claims, we can make assumptions based on taste, smell, genetics, and effects. Going off this information, it’s likely that the terpene profile includes Caryophyllene, Myrcene, and Limonene. It may include Pinene and Humulene.