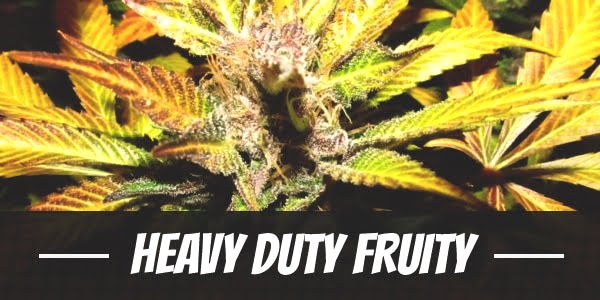 Eyes rolling, mouth salivating, how can one not with the thought of a heavy-duty cannabis? Such is the case with the strain featured here.

Heavy Duty Fruity is a strange name, but once people see its traits, then it begins to make sense. But before we get into more details, all one needs to know is that it gives an intense experience.

Bred by T.H. Seeds, they used three strains to create a hybrid that they named after its traits. As such, Heavy Duty Fruity, in a nutshell, is the best of Killing Garberville, Seattle Big Bud, and Mendicino Hash Plant.

Everything about this strain and especially when it comes to its effects is intense. Its buds have THC content in the range of 18% to 21%. As such, users can expect it to generate a powerful buzz.

Looking at the massive size of its buds, no doubt passed on by one of its parent, the Big Bud, is enough to get users high. Kidding aside, a few tokes and it starts to weave its way into the mind. A sweeping sensation of happiness fills its users that worries become a distant memory. Moments later most users will find themselves feeling euphoric. In some instances, the mental buzz can be very pronounced.

While its cerebral effects are very much evident, Heavy Duty Fruity is an Indica dominant strain. As it works its way down, most users are likely to feel tingly. It will not take long, though, for people to feel complete body relaxation. At this point, it is safe to assume that users will cease to budge wherever they are.

This strain is called heavy-duty because of its intense effects that leave users in couch-lock, as well as heavily stoned.

Heavy Duty Fruity, once its buds are broken, has a sweet fruity and citrusy smell that most people will find pleasant. Where it can become a concern is during its cultivation. It has an extremely pungent aroma. More on this in a later section on growing.

The sweet fruity taste carries over and has a beautiful blend of pine and berry. Its smoke also comes with a peppery, spicy flavor. Generally, most people should find it a delight.

Using Heavy Duty Fruity is comes with certain unwanted effects. However, these are often not serious and are actually prevalent with marijuana use. For instance, users are bound to feel their throat and eyes drying. About the only thing to do is staying hydrated.

In some cases, some people may also feel dizzy or have a headache. Such conditions are temporary and will be gone within an hour or two.

One thing to note is that people who are predisposed to anxiety should not use this strain. As it turns out, some people may actually feel a little more anxious with its use.

The heavy hitting Indica side of Heavy Duty Fruity has its benefits for the medical cannabis users. Because of its sedative-like traits, it can help crush ill thoughts. At the same time, it is also effective in alleviating the symptoms of pain. For patients with chronic illnesses, it makes sense to use this strain as opposed to using painkillers.

Some users have also reported its usefulness in helping people who feel nauseous. And as its effects wane, it also makes users feel sleepy. As such, it can be helpful for insomniacs.

Heavy Duty Fruity is not going to grow taller than six feet. Growers can cultivate it outdoor or indoor. It doesn’t matter as it thrives in both environments.

Outdoor, the only concern is its strong aroma that can carry over great distances. Since privacy is an issue, it is best to avoid cultivating it in the garden. Unless one lives in an area where it is legal to grow a plant or two.

Meanwhile, the best way to cultivate Heavy Duty Fruity indoor is to use hydroponics. It allows for an explosive growth and along with it, massive yields and buds.

As mentioned, it has a very pungent odor. Not only can the smell be overbearing inside the house, but the smell will still reach neighbors. Hence, growers will need to use carbon-activated charcoal filters to control the odor. If there is ever a time when one should spend for a high-quality product, the filter is one of them.

Like many other Indica plants, it does not grow tall. Indoor, topping early to keep it short is preferable. After 8 to 9 weeks, growers can now switch to 12/12 light cycle to start the flowering phase. A few weeks later when it is ready for harvest, it gives an abundant yield of up to 21 ounces per square meter.

Growers who can grow this strain in their garden are lucky. It is not only cheaper, but growing outdoor is one way to have better flavors. In most instances, it enters the flowering stage in the middle part of October. Each plant can produce large buds, all 21 ounces of them.

Have you ever smoked or grown your own Heavy Duty Fruity? Please let me know what you think about this marijuana strain in the comments below.