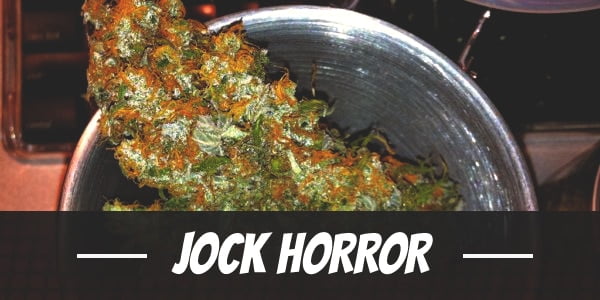 Jock Horror is a play at one of the famous names in the world of marijuana – Jack Herer. Although no one seems to know what about the strain necessitated attaching horror to its name, one thing it does well is to jack up its users. In particular, this is one strain that can deliver an intense euphoric high.

Jack Herer, created by Sensi Seeds, is a great strain and named after a friend of the cannabis community. Looking at its genetic lineage, it is clear that both strains share the same family tree. In fact, they both have the same exact sets of parents – Northern Lights, Haze, and Skunk No. 1.

All parent strains are legendary in their own rights. They are also among the world’s most famous strains and have each been used to create countless other hybrids.

As far as we can gather, it appears that the Jock Horror is a phenotype of Jack Herer. As such, it does have similarities in that both are Sativa dominant. However, it is the manifestation of their effects that differ.

One thing the breeders are great at doing when it comes to designing new hybrids is raising its potency. Indeed, Jock Horror is no exemption. At worse, it is very potent. But because its THC can reach as high as 24%, that makes it essentially one of the strongest strains in the world. As such, users need to be careful in using it and never to underestimate its strength.

After a few tokes, generally, most people feel the intense rush of cerebral high that alters their behavior. No matter how one is feeling, they are bound to succumb to the overwhelming euphoric sensation. As such, many will find themselves feeling more sociable and talkative.

At the same time, creative juices start flowing leading users to have ideas and thoughts flooding their mind. Of course, it is not the kind that hinders one’s ability do tasks. In fact, what it does it to clear the mind. Because of that, artists, for instance, will benefit with the added boost in ability to think and create.

Meanwhile, the physical body effects cause the muscles to relax. Free of tension, the Indica properties blends in with the cerebral high. In a sense, Jock Horror frees the users’ mind, helps them feel relaxed while remaining productive.

At some point though, most users will also feel hungry. It becomes more pronounced an hour or two after the initial high.

Imagine stepping foot into a pasture with wildflowers scattered all around. It is not hard to picture one’s self in a surreal setting especially because of its scent. Jock Horror reeks of earth and grass with a strong floral hint.

As its incredible scent carries over, its flavors also have a honey sweet and spicy mix of nuts and berries. No, we are not describing cereal here, but it is as close as any cannabis strain can get to being one. Without a doubt, anyone who smelled and tasted Jock Horror will want more, which is why self-control is necessary.

All marijuana can induce mind or body blowing experiences. At the same time, it also comes with annoying effects. Among the most common unwanted effects are having dry mouth and eyes. Not to worry though as these are pretty much normal and poses no harm. One way to avoid these from happening is to stay hydrated.

In cases when some people do breach their tolerance limit, some may feel a little dizzy while others may experience anxiousness. As such, we remind people to use only a small amount especially if it is the first time using Jock Horror.

Depression is a horrible condition, but some people have to suffer. It could either be a psychological or physiological issue, or both. At any rate, anyone who has ever felt depressed knows it is not a great way to live life. With Jock Horror, they can now take away the pain and the burden.

No, the strain is not a cure, but its uncanny ability to raise the spirit and induce euphoria can help. In fact, second to depression, the hybrid is also notable and highly sought for its potency in squashing stress.

As mentioned, most users are likely to feel hungry. As an appetite stimulant, the strain is for sure useful to people with eating disorders.

Jock Horror is not the hardest plant to grow. However, some experience is needed for successful cultivation. It grows up to 10 feet tall outdoor with a conical shape with narrow leaves on long side stems. It also thrives in a Mediterranean climate.

But to maximize the potential of the plant, the best environment is to use hydroponics indoor. Topping it early to keep it short as well as using the Screen of Green training technique should help boost its yield. Not that it is a big producer, far from it, this particular cannabis plant’s yield is average.

After growing the plant for 9 weeks, it is ready for the next stage. Waiting a couple of weeks more is at the discretion of growers. Although its yield can be as little as 7 ounces per square meter, high-quality seeds and expert care can raise it to 16 ounces.

Getting one’s hands on the tight buds heavily frosted with crystals, it will require a lot of attention and care. Tending becomes more important as it approaches it flowering stage beginning the third week of October. But the results of hard work pays off with a harvest of up to 16 ounces of buds per plant.

Have you ever smoked or grown your own Jock Horror? Please let me know what you think about this marijuana strain in the comments below.