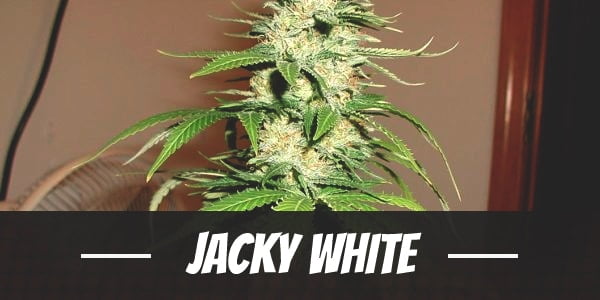 If this is a fairytale, then Jack did meet Jill and married her. End of story. But that is not the case here. Of course, we will have more of this in a while. Suffice to day, the featured strain Jack White is one that is to make one feel energetic yet focused.

Jack White is a creation of one of the most reputable seed banks, Paradise Seeds. A product of the union between two highly regarded strains – Jack Herer and White Widow.

A classic case of a multi-awarded strain meeting the irresistible that is the story of Jack White.

One of the traits inherited from Jack Herer, aside from its Sativa genes, is its potency. As such, growers and users can expect Jacky White to have a high THC content.

Once its effects start to manifest, a sweeping euphoric sensation rushes in. Immediately, users feel a heightened sense especially in the clarity of the mind and focus. Accompanying the sensation is an energetic boost that puts users in overdrive. No doubt, this is a trait inherited from the White Widow, for which it is famous for worldwide. Because it does not cause a foggy mind, most people feel more able to do their tasks.

Although Jacky White is mostly a Sativa strain, it does have its smaller Indica side wielding its noticeable influence. It is manifested by a relaxing feeling enveloping the body, but it does not reach the point where it delivers a numbing buzz. In other words, it does not lead users to a couch-lock.

Growers who want to grow this plant outdoor will be pleased to know that it does not emit a pungent odor. Even so, it does not mean that it is not noticeable by neighbors in adjacent properties. After all, the wind comes from and blows in different directions. At any rate, it has a pleasing aroma that consists of a sweet scent with a citrusy smell of grapefruit.

The smell of Grapefruit is evident and much more pronounced as the buds are broken into smaller pieces. However, it does not carry over to its taste that much. Instead, Jacky White has a sweeter taste with floral hints, accompanied by the mild tone of grapefruit.

Using marijuana is not without its annoying effects. We say so because such reactions do not cause long term harm. For instance, Jacky White can make some people feel their mouth drying. Such is deemed normal and becomes more pronounced once users smoke too much. In that case, they may also experience dry eyes.

In some instances, as the effects rush into the head, some people may feel dizzy. For this reason, plan to use Jacky White when there is no need to drive a car. A better option is to use it in the house.

Jacky White, generally, is a great strain for daytime use. It is also for most people except for some who are predisposed to anxiety. It is because, in some rare instances, it can increase anxiousness or cause some to feel a little paranoid.

The incredible and intense euphoric high of Jacky White wipes away all forms of stress. In fact, for medical cannabis users, it is its ability to uplift the mood that makes it an ideal strain.

It does not have a high enough CBD content, though, to be effective in treating seizures or epilepsy. Although it is not designed to be a medical cannabis, its effects also bring comfort and relief to some. For instance, relief from mild pains and aches. Even some gastrointestinal issues such as nausea, Jacky White may prove to be useful.

Jacky White is deemed as a suitable marijuana plant for beginners. It does require some tending to, but most growers should manage it well enough. It thrives in a Mediterranean climate and will need ample spacing as it tends to branch out. Indoor, the same holds true.

This plant can grow up to 4 feet, as such, it should be easy to hide it from plain view if one were to cultivate it in the garden. However, its scent may be detected even if it is subtle.

Growers have the option of triggering the flowering stage on the seventh week. A couple of weeks more is better as it helps the stems and branches grow a tad bit stronger. Once harvest time comes, expect a yield per square meter of 18 ounces. Depending on the size of the hydroponics tent, it is best also to top it early to keep it shorter.

Due to its branching, as mentioned, be sure to provide enough gap in between each plant. At the same time, it may be necessary to provide some support or else the branches may break. By the second to third week of October, growers can expect Jacky White to start flowering. Be sure to gradually change the fertilizers to ones suitable for this stage. In only a few more weeks, each of these plants will now provide 22 ounces of buds.

Have you ever smoked or grown your own Jacky White? Please let me know what you think about this marijuana strain in the comments below.