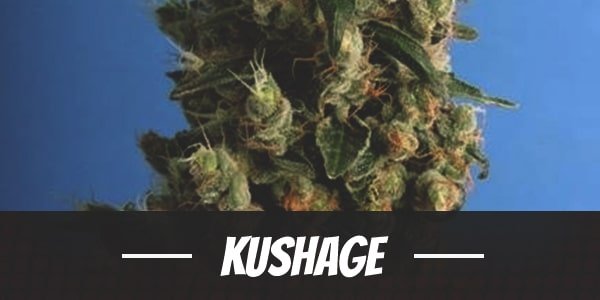 Several decades ago, there was not a lot of strains in the world. But those few strains, some went on to become classics. Going on to become legends, breeders have used these strains to create countless hybrids throughout one generation after generation. Today, in particular, we are looking at Kushage – a Sativa dominant hybrid and one that promises to deliver the ultimate relaxing yet euphoric experience.

In the world of marijuana, it is pretty much a foregone conclusion that avid users would have heard of OG Kush. In fact, most of the hybrids in the west coast of USA traces its lineage to this strain. Notable for its ability to wipe away stress and induce euphoria, it has established itself as a timeless classic.

Meanwhile, another strain called SAGE (Sativa Afghani Genetic Equilibrium) has also taken off. This one is notable for its incredible uplifting effects.

Both these strains have received countless accolades. As such, using them to create another hybrid, a lot of expectations is placed on its offspring – Kushage. Of course, it more than help up its own after coming away third in the Sativa category of the High Times Cannabis Cup in 2005.

In 2010, a senior cultivation editor of High Times, Danny Danko, chose Kushage as one of the top 10 kush strains. It suggests that this hybrid brings something unique and special to the table.

Such is the expectation of users when they get ahold of its buds. A few tokes in, a better understanding of why it is one of the best becomes apparent.

Once its effects begin to manifest itself, users feel a surge of energy penetrating the cores of their body. As if in shock, it sends users soaring sky high in euphoria. Unlike a few others, it does not cause users to feel spacey or stoned. Instead, most would have a clear mind with heightened senses.

Remnants of the surging energy are felt throughout the body as users tend to feel tingly. In essence, its users remain functional and are able to focus on their tasks.

Although slightly less dominant, Kushage also exhibits an incredible physical effect that causes people to feel very relaxed but not to the point of causing a couch-lock.

In describing the experience of using Kushage, it is hard to distinguish it from other strains. Perhaps the only way to understand it is to do what others did. Get some and use it. But be careful. Do not underestimate its potency.

Kushage may not be the best strain to grow in the garden if privacy is an issue due to its pungent earthy odor. It is accompanied by an herbal note with blends of citrus and sage.

The spiciness of its smoke is perfect and makes it smooth. Couple that with the mix of citrus, wood, and sage, and what we have is a good tasting strain that influences some people to use more than usual.

First things first. Kushage is not an easy strain to handle. For some, they may feel paranoid even as they experience the amazing effects. At the same time, it can also make people feel anxious. If these are a concern, then avoid using it. However, as an option, one can always start with a small amount and work on increasing it a tad bit over time.

Other than that, the usual negative reactions include feeling the mouth and eyes dry. Sometimes, it is also possible for one to feel a little dizzy.

A trait inherited by Kushage from the OG Kush strain is its ability to crush stress. As such, it has become its most popular use in the medical cannabis community. To some extent, it can also be useful for mild pain relief. Other notable uses of Kushage includes dealing with muscle spasms.

Growers will be pleased to know that Kushage plants grow in outdoor and indoor equally well.

In open areas, a climate with lots of sunshine will help the plant grow best. If it is legal and possible, this is perhaps the best way to cultivate Kushage. Growing it in soil ensures that it can have the best flavors.

Meanwhile, if necessary, growers can grow it indoor using hydroponics. It adapts very well to the Screen of Green technique which, in turn, helps it produce more buds.

Kushage can grow really tall. As such, growers will want to top it early to keep it short and promote an outward growth. It will take around ten weeks before it is ready to enter the flowering phase. Under 600 watts of lighting, each square meter of this plant can yield up to 14 ounces of long buds covered with orange hairs.

The plant thrives under constant exposure to sunlight but while young, it is best to have ample shades to avoid overheating. As it reaches maturity, it becomes more tolerant. Flowering time occurs during the second to third week of October. Once ready, growers can expect around 18 ounces of buds from each of these plants.

Have you ever smoked or grown your own Kushage? Please let me know what you think about this marijuana strain in the comments below.