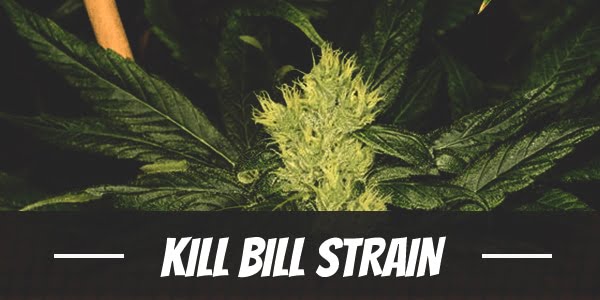 Everyone must have heard of Kill Bill at one time or the other. It was one of the more successful films released in recent memory. So, what is it about a flick on assassins have anything to do with a strain?

On the surface, no, it does not make any sense. But once we get into its lineage or genetic origin, then it will make sense. Of course, that is what we will cover in the next section.

Meanwhile, if we are to find a reason why its name is apt, then we have to look at its most notable trait – relaxation. In a sense, using Kill Bill is like sending an assassin to take out the stressors. Before we get into trouble, though, that statement is figurative and hyperbole.

As mentioned, on why Kill Bill was named as such, it goes to its parents – Killer Queen and Willy’s Wonder. See the connection now? Willy is a nickname of William. We know William is Bill. Get it?

Lest anyone thinks that names are all there is to the parent strains, know that both are potent and good at what they do. Killer Queen is notable for her noticeable cerebral effects. Willy’s Wonder, on the other hand, is a heavy-hitting Indica. Using both these strains, the original breeder of Kill Bill has done a marvelous job of designing a balanced hybrid.

Kill Bill is a lethal assassin. It starts to work its way to the mind and body beginning with an intense rush of cerebral high. At its onset, users not only feel uplifted but also elated. For a brief time, they have a clearer mind and focus, at the same time, are on the go with the boost in energy levels.

The heightened senses also result in feeling tingling sensations all over the body. Already in a good mood, users start to slow down as the relaxing physical effects start to creep in. Still, they remain alert and fully functional. Such is a trait that Sativa lovers love. It does not cause one to feel spacey or induce narcotic like psychedelic effects.

Whatever it is that is troubling users, Kill Bill does what it does best – take them out. As a result, people using it feel relaxed and able to do their chores with peace of mind.

One thing growers may not like about cultivating the plant outdoor is its pungent odor. The sweet and skunky smell blended with floral hints and the smell of pine makes for a pleasant aroma. But because it carries over well with the wind, nosy neighbors may realize what the growers are up to.

Although its odor is pungent, much of its aroma does not carry over to its taste. Most users are also bound to be surprised at the sweet strawberry flavor thrown into the mix. Notwithstanding the surprise, they will find its taste very much agreeable.

Kill Bill for all the incredible effects it brings is not as widely distributed as some other famous strains. As such, there are fewer reports of its adverse effects from users. Still, one thing that stands out is how its use may cause headaches.

Keep that in mind when using Kill Bill for the first time. It is very potent, and if it can cause a headache, then the symptom worsens once personal tolerance limit is breached.

At any rate, be prepared to experience a typical unwanted reaction from the use of cannabis – dry mouth and eyes.

As mentioned, using Kill Bill may possibly cause some people to have a headache. Still, that is also one of the reasons why medical cannabis users find this strain helpful – it aids in eliminating headaches. Consequently, it also helps ease pressure around the eye sockets – a common symptom accompanying severe headaches.

Other notable uses of Kill Bill are in stress relief. In some instances, people with depression may find its mood-altering traits helpful. Indeed, its ability uplift the mood makes it easier to deal with and fight being depressed.

Kill Bill is not the easiest strain to grow. Still, most beginners should be able to grow it quite well. It may come with a little more tending than others, but that is a part of the learning curve. What is even better is that once it is time to harvest, growers know they have in their hands a great strain.

It grows well enough in most warm climate or a sunny environment. Outdoor or indoor, it does not matter. It depends on growers and whether they are allowed to or not. One thing about growing this plant is that it is tolerant in cooler conditions. No doubt, people who live in colder regions should find this encouraging.

All it takes is to germinate and grow it well until the plant reaches seven weeks. Once ready, growers can now switch the light cycle to trigger its flowering stage. Each square meter of this plant (usually put under 600w of lighting) can produce anywhere from 10 to 14 ounces of dense round buds with sticky coatings.

Grown outdoor, it is likely that the plant may reach 6 feet tall. It is not much of a concern if grown in an area where it is allowed. At any rate, flowering phase falls between September and October. Each of these gorgeous plants can produce at least 18 ounces or more of buds.

Have you ever smoked or grown your own Kill Bill? Please let me know what you think about this marijuana strain in the comments below.