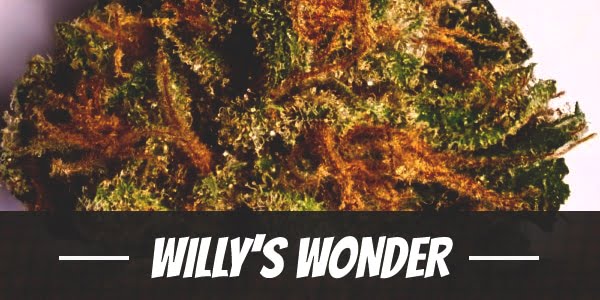 In modern cannabis, Willy’s Wonder has got to be ancient as it has been around since the 1970s.

Coincidentally, it was also a time when Willie Nelson became popular.

So, whether this cannabis strain was named after the singer or not, no one really knows.

To date, the origin of Willy’s Wonder remains a mystery, although there are theories floating around.

But one thing we do know is that this is a powerful Indica-dominant strain that will do one thing and do it well, and that is to bring total relaxation to the point of making you feel sleepy.

As mentioned, the origin of this strain remains a mystery even as it has existed for more than four decades.

What is available today are derived from the original Super Sativa Seed Club (SSSC) seed stock.

Willy’s Wonder (also known as William’s Wonder) is a predominantly Indica hybrid that probably came from the line of Afghani Indica.

Used in a small amount, Willy’s Wonder can give consumers a mental high with a heightened sense of focus. It could also uplift your spirit and make you feel happy. But that is only during the onset. As its powerful Indica side creeps in, your body would soon feel an overwhelming sense of calm that seems to release the tensions from the body. This relaxing feeling is probably going to leave you in a couch-lock and too lazy to move.

The potency of Willy’s Wonder should never be underestimated. For those who consume a small amount, they would find themselves feeling sleepy. But use it a little too much, and one may wake up the next day foggy and fatigued. In fact, this strain should be avoided by anyone who is new to smoking cannabis. Even for those who have been using other strains, the best way to use this strain is to smoke a little bit and work towards increasing the amount to what is normal for them.

If there is one word to describe how this cannabis smells, then it has to be pleasant. Willy’s Nelson has a sweet and earthy odor with a note of citrus and pine that should appeal to you.

If you find the odor of Willy’s Wonder pleasant, then you should be happy about how it tastes as its fragrance carries over but with a fruitier aftertaste.

For those new to smoking Willy’s Wonder, and not necessarily new to using cannabis, there is a chance that they might feel dizzy. Other than that, the most common negative reaction from the use of this strain is dry mouth and dry eyes. One way to combat the negative reaction is to stay hydrated.

Whether or not this cannabis was named after the popular singer Willie Nelson, one reason why people listen to music is to feel relaxed. And that is the same thing medical cannabis users look forward to when using Willy’s Nelson.

It has a mental high that is soon dominated by a physical body high, which results in total body relaxation. In this way, the users get a relief from stress. For that reason, too, those who suffer from anxiety disorders might benefit from it.

Aside from helping users cope with anxieties, Willy’s Wonder might also offer pain relief for mild cases. Because this strain is almost sure to make the smokers feel sleepy, it is a good strain to use when there is nothing else to do, especially at the end of the day. Among those who would benefit are people with trouble sleeping including insomniacs.

There are also reports of users who say they feel hungry after using Willy’s Wonder. Trouble is that they are too relaxed to get up and look for food. Because of that, it might be a good idea to have some snacks on your side before using this cannabis.

Sometimes, we do not know how true the claims are when it seems that the original strain no longer exists. For instance, SSSC has stated that Willy’s Wonder, if grown under the right conditions, could produce a staggering and mind-boggling yield of 50 to 70 ounces per square meter.

Regardless, if you do get your hands-on Willy’s Wonder, then it is probably an inbred strain from the original strain. This cannabis plant is meant to be grown indoor. Should you decide to grow it outdoor, then you would have to first start indoor and bring it outside during flowering stage.

Willy’s Wonder should thrive well indoor with a good set up and under the care of a grower with some previous experience in growing plants. It has a flowering time of 65 to 75 days and the expected yield per square meter during harvest should be between 12 to 16 ounces.

Should you decide to take Willy’s Wonder outdoor, we do not have the exact information, but all indications point to a yield of more than 16 ounces per plant during harvest in October.

Have you ever smoked or grown your own Willy’s Wonder? Please let me know what you think about this marijuana strain in the comments below.