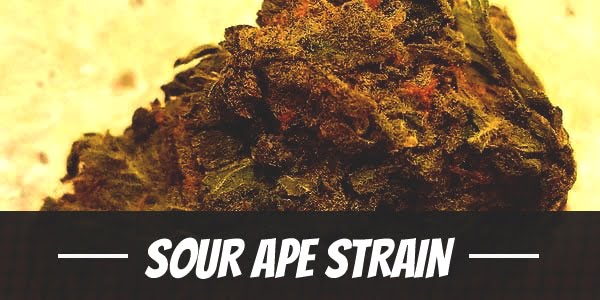 Sour Ape is highly appealing to Indica lovers who like the quick-acting effects of Sativas. Within minutes after the first few swigs, it delivers a light buzz of energy throughout the body that is later overpowered by its heavy-hitting high. Eventually, the high tapers down to a well-deserved rest after a hard day at work.

Breeders at Joseph Arthur Botanicals took two legends to create Sour Ape, the award-winning Sour Diesel and delicious Grape Ape.  The former influenced its tangy overtones and fast onset. From it, its offspring also gained its impressive performance in the grow room. Meanwhile, the latter contributed to its stunning purple hues that catch the eye as well as its fruity terpene profile.

It is best to stay cautious while using Biker Le’Blanc. It has an intimidating THC content of 20% to 26% that, if used beyond one’s limits, can deliver a devastating high. In moderation, though, it is quite the charmer. Its onset is quick and marked by a subtle rush of energy that gradually intensifies as the high persists.

The behavioral change is noticeable once the effects have settled. A smile etches itself into the contours of one’s face as an innate sense of happiness radiates from the inside. Meanwhile, a euphoric buzz assures users of an upbeat disposition that lasts beyond the session.

Gradually, a heaviness finds its way on to the limbs. It starts as a creeping but tingling sensation at the temples and surges throughout the body, calming and soothing. It blankets users in deep relaxation as it begins to intensify. In all likelihood, it becomes increasingly difficult to resist the tranquilizing body buzz. Eventually, the eyelids droop as a drowsiness sets in. Users fall into an unencumbered slumber that invigorates the body while at rest.

While it may have deliver a gentle buzz of energy at the onset, it is better used late in the afternoon or early in the evening. Otherwise, it can turn an otherwise productive day into a lazy melt.

Sour Ape has a pungent fragrance that is reminiscent of tangy fruit and sour diesel. Strong overtones of grape permeate in the room after breaking apart a bag of buds. Meanwhile, combusting it reveals its sweet smoke.

Sour Ape has a strong smoke that swarms the mouth with its fruity overtones of grapes. It has a sweet quality accentuated by a subtle sourness. On the exhale, it leaves a distinct diesel aftertaste that entices the palate for hours after the last smoke.

Red eyes and a cottonmouth are two common side effects when it comes to smoking marijuana. The experience is no different with Sour Ape. As such, users should prepare glasses of water to drink throughout the day to manage the dryness. Alcoholic and caffeinated drinks should be avoided too.

Sour Ape is a favorite strain among medical cannabis users. It has a stress-relieving high that uplifts the spirits and brings back one’s long lost smiles. In inducing a newfound sense of happiness, it also manages symptoms of mental health issues like depression and PTSD. At the same time, it also calms the fast-paced worries running through one’s anxious mind.

The same psychoactive compound also relaxes the muscles throughout the body. Beginning from the temples, it delivers a soothing sensation that eases users into deep relaxation. It appeases turbulence in the stomach that, if left unattended, can cause vomiting and a light disorienting headache. For this reason, it is a source of comfort to cancer patients dealing with the nauseous side effects of chemotherapy.

Biker Le’Blanc exhibits the typical qualities of an Indica-dominant strain. It has a sturdy stalk with thick branches that can carry the weight of its heavy buds. Not to mention, it has a natural resistance against a variety of unpredictable growing factors like strong gusts of wind or drops in temperature. Because of this, it is ideal for beginners.

Its preference for cool weather makes growing the plant in the northern hemisphere easier. Still, growers should invest in a temporary enclosing that will protect it against harsh weather. An early winter, for example, can bring about frost that may potentially kill off the plant overnight. For this reason, many growers prefer cultivating the strain indoors or in a controllable environment where factors like temperature, lighting, and humidity are accessible and adjustable.

Its compact structure is the best candidate for the Sea of Green method. Growers can place at least four of the plants in a single square meter to increase yield while maximizing space. However, it will need to be pruned often as its density can harbor moisture in between its crevices. Leaving it unattended with leads to its development into mold or mildew which may stunt the plant’s growth.

Installing a proper ventilation system is also highly recommended. It will not only reduce moisture or high levels of humidity but also lessen the pungent scent circulating in the grow room.

Indoors, Sour Ape has a short flowering period of 7 to 9 weeks. It is expected to yield between 10 to 12 ounces of buds per square meter. Under the expert care of a seasoned grower, it produces a higher yield.

Sour Ape blossoms between the last week of September to the middle of October when cultivated in the northern hemisphere. Once ready for harvest, it produces at least 12 ounces of buds.

Have you ever smoked or grown your own Sour Ape? Please let me know what you think about this marijuana strain in the comments below.