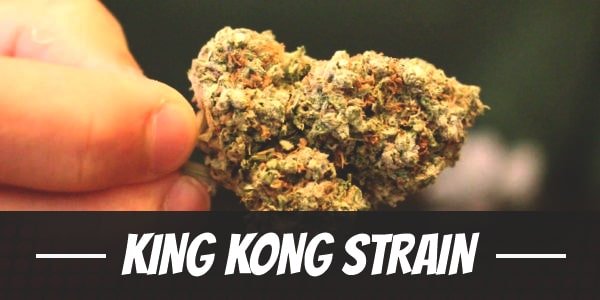 Looking through a list of cannabis strains to try, the name King Kong should stop anyone in their tracks. Having such a sensational name has its benefits. For instance, users are likely to take a second look.

Does labeling a strain after a large gorilla means it packs a punch?

Before going into how potent it is, there is one thing that makes this strain unique. Despite being 80% Indica, its effects seem to suggest that it is a balanced hybrid. In other words, it delivers not only a physical high but also a cerebral high.

As for its potency, it does come with a greater than average THC level. Because there are so much more other more potent strains, some may feel disappointed. But King Kong has something up its sleeves so read on.

From what we can gather, a couple of other strains go by the same name. As such, it is important to differentiate one from the others. A good way to do that is to look into its genetics.

The King Kong strain on this article is the creation of Dr. Underground. By reversing a Chronic female hybrid, they produced a male plant and cross bred that with another. In this case, they pollinated a female Ed Rosenthal Super Bud.

From this union, King Kong was born.

King Kong does not step on users nor does it grab and throw them around. Instead, what it does is to deliver a soothing hit that increases in intensity. At its onset, the strain causes users to feel happy and in some cases, even euphoric. Also, some people may feel tingling sensations on their body.

To be clear, the Sativa effects of King Kong are not overpowering, and the body high soon follows this. As it creeps down to the body, users start to feel relaxed. If relaxing is the primary goal of smoking weed, then King Kong is a great strain to use.

But more than that, the strain also offer benefits to medical cannabis users. But we will cover that in another section.

As mentioned, King Kong is unique in a way that some people feel like it is more of a balanced hybrid. One reason for that is how well the Indica effects blend with the mental high. Because the Indica side does not overwhelm its Sativa side, it may give such impression.

When it comes to its scent, this strain does smell like King Kong. It has a pungent, sour and spicy smell of a skunk blended with the smell of soil. We would not exactly say it has a horrible smell. Far from it, there are more people who like this kind of scent.

As for how it tastes, it is as if its scent passed through a filter. As a result, the smell carrying over to its taste is underwhelming. A welcome addition is the lingering taste of pine wood that makes it more than decent enough. One thing though, its smoke can be a tad bit rough.

Smoking weed for whatever reasons brings with it some negative reactions. Use it a little too much, and one is bound to have dry mouth and eyes. These effects are not much of an issue as they are normal when it smoking cannabis.

But what may be a cause for concern is that King Kong may cause some people to feel more anxious or paranoid. As such, it is important always to use a small amount to test it first. Finally, there are also users reporting that its use can also cause a mild headache.

As a rule, we can lessen the occurrence of adverse reactions by using cannabis within limits.

We do not have information on how much CBD King Kong strain has. Even so, it cannot be more than 1%. For that reason, it has no medical benefit for those suffering from seizures and epilepsy.

For most medical marijuana users, though, the best benefit of using King Kong is in pain-relief. At the same time, its ability to induce relaxation is a great stress reliever. Because of that, the strain may prove useful to patients with mental disorders such as depression.

Once the effects of King Kong begin to subside, users tend to feel sleepy. In this way, it can be helpful to Insomniacs.

King Kong strain thrives in both outdoor and indoor environments. About the only concern when planting in the open is its smell. It can carry over tens of meters and may arouse the curiosity of neighbors. The same is also true even if grown indoor. If so, then growers will want to use a carbon-activated filter to eliminate the odor.

Another thing to think about is its branches extending out. For this reason, only growers with experience should cultivate this strain. In an indoor setting, different training methods help control the growth.

Did we not say King Kong has something up its sleeves?

The strain matures faster than many other strains in 7 to 8 weeks. Once the plant is ready, this is when growers understand why the breeder named it King Kong. This plant has an enormous yield per square meter of 24 to 32 ounces.

Let the plant grow in a warm and sunny climate but with ample shade. As September comes to a close, growers can expect a yield of around 36 ounces.

What is the King Kong strain yield?

How much THC does King Kong have?

What are the origins of the King Kong strain?

King Kong was created from a mix between Ed Rosenthal Super Bud and Chronic.

Have you ever smoked or grown your own King Kong? Please let me know what you think about this marijuana strain in the comments below.