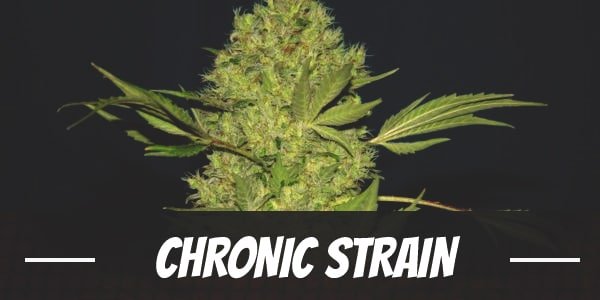 When one comes across the word chronic, it does not always bring about the most favorable connotation, unless one is a fan of the rapper Dr. Dre who had an album named “The Chronic” released in 1992. Nonetheless, it is undeniable that the word “chronic” can easily catch anyone’s attention especially among cannabis users who have probably heard of the term since their first pot session.

Speaking of pot sessions, here is one cannabis variety that has most likely been a household strain among users since the mid 90’s. This strain is no other than the Chronic. Loyalists would refer to this strain as a living legend or a true classic weed.

Having been dubbed as such, much pressure is placed upon this strain. After all, with great power comes great responsibility. Well, in the case of Chronic, its great power comes with greater expectations. On that note, let us take a closer look at this true 90’s weed to learn more about how it has managed to earn so much respect from the cannabis community.

Chronic was originally bred by Serious Seeds back in 1994. The strain was developed by crossing some of the most reputable cannabis varieties: Northern Lights, AK-47 and Skunk No.1. The AK-47 was initially meant to increase the strain’s resin production and improve its overall potency.

With its impressive pedigree, it is no surprise that Chronic placed 3rd in the High Times Cannabis Cup in the same year it was introduced to the cannabis community and has, later on, earned numerous recognition in the following years.

Chronic is one of those strains with a perfectly balanced Sativa to Indica ratio combined with a relatively high THC level at 22% tops. Thus, the strain offers a highly potent yet well-rounded high.

At the onset, the cerebral effects of the strain quickly manifest. The rush of energy and sense of euphoria is almost immediate, jolting users with happy and creative thoughts. This type of head buzz typically prompts users into feeling more sociable as seen in how they become more talkative and giggly.

The Indica side of Chronic, on the other hand, only becomes apparent as the body is slowly taken over by a deep relaxation that can induce sleepiness in larger doses. Otherwise, the user will merely feel lazy and hungry.

The overall effects of Chronic are quite persistent. In fact, some users have reported dealing with 6-hour long high. On that note, Chronic should ideally be enjoyed at night on social gathers or alone before one hits the bed.

The aroma of Chronic has such an interesting contrast. It smells pungent and skunky with a woody and herbal hint. However, the sweet notes of honey and flower give the strain’s overall fragrance a fascinating twist.

If grounded, the signature scents of spice and hash from its AK-47 parent shines through. Some users find its smoke a tad too strong that it becomes harsh on the nostrils. Nonetheless, this is what makes Chronic such a classic strain.

The same contrast can also be tasted in Chronic’s overall flavors. To wit, it has the same traces of herb, pine and skunk undertones that are complemented by the sweetness of honey.

The smoke of Chronic tastes somewhat fruity with a touch of pepper when exhaled. This sensation remains on one’s palate even after smoking. Overall, Chronic maintains a classic weed flavor with an unexpected sweet surprise.

Every well-informed cannabis user knows that side effects are somewhat expected when smoking marijuana. However, these can vary depending on the strain’s potency and other factors.

In the case of Chronic, prospective users should be happy to know that the commonly reported adverse reactions from this strain are significantly mild cases only. Typically, users have a greater tendency of experiencing dry mouth more than anything else. In fact, other common reactions such as dizziness, dry eyes, paranoia, and anxiety are very rare.

However, note that the latter cases can potentially manifest in users who are prone to being panicky or generally, those with low tolerance to THC.

Chronic has an impressive CBD concentration of a maximum of 1.80%. On that note, this gives the strain enough power to aid patients with epilepsy, seizures and practically those who are greatly dependent on CBD.

We don’t currently sell Chronic seeds. Check out other hybrid seeds in our marijuana seed shop.

Furthermore, its uplifting euphoria can effectively help patients dealing with depression and stress to get their heads off all the negative thoughts and ultimately improving their overall mood.

Chronic may also contain some sedative and analgesic properties that can provide temporary relief from pain caused by certain illnesses and further induce sleepiness for insomniacs and stimulate hunger for those with poor appetite.

Chronic may be grown indoor or outdoor. Growing the plant in a controlled environment is more preferable. However, outdoor cultivation is possible given that the plant is grown in a semi-humid climate with daytime temperatures between 72° to 80° Fahrenheit. Also, it is best to choose a patch of land away from prying neighbors.

For indoor cultivation, the plant can thrive using a Hydroponic setup. Indoor growers may also need to invest in odor control systems such as exhaust fans and carbon filters to contain the strain’s strong pungent aroma.

It may take 56 to 63 days for Chronic to fully mature if it is grown indoors. The plant is pretty generous with its yield. It can produce as much as 14 to 21 ounces per square meter.

If grown outdoors, the plant may be harvested around mid to late October. The outdoor yield is equally promising at 25 ounces or more per plant.

What is the Chronic strain yield?

Chronic yields 14 to 21 ounces per square meter indoors and  25 ounces or more per plant outdoors.

How much THC does Chronic have?

What are the origins of the Chronic strain?

Chronic was created by Serious Seeds. It was the result of a mix between Skunk #1, AK 47 and Northern Lights.

Have you ever smoked or grown your own Chronic? Please let me know what you think about this marijuana strain in the comments below.