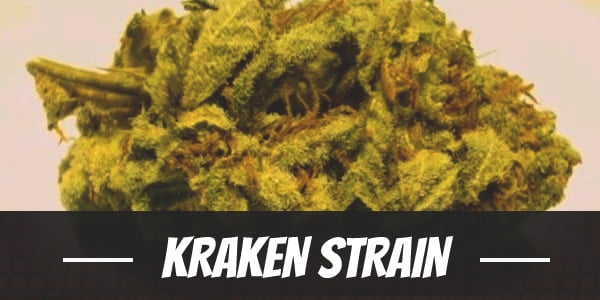 In stories of old, the kraken wreaked havoc upon sailors in the coasts between Norway and Greenland. Its quick tentacles would grab hold of boats and, in one bite, would swallow it whole with its giant mouth. Although this was only a tale of the sea, it inspired a generation of people that went on to continue the legend.

Kraken has the capacity to engulf users with a deep sense of relaxation that can render the body totally immobile. And, rather than being a destroyer, it produces massive yields with its rather intimidating heavy-branching capabilities.

Buddha Seeds has decided to keep its genetics a secret. However, many speculate that its genes contain Ruderalis, Sativa, and Indica varieties that helped bring out its power as a breeding strain.

Its THC, which seldom exceeds 15%, is often enjoyed recreationally. However, it remains a source of comfort on a rather cloudy day.

Kraken is not an Indica-leaning plant. It is a hybrid with equal parts of the spectrum. As such, one would think it is well-suited for any time of the day. Yet, its effects say otherwise.

We don’t currently sell the Kraken seeds. Check out other Hybrid seeds in our marijuana seed bank.

Rather than the upbeat, energizing onset associated with evenly split strains, it delivers a calming euphoria that gently cradles the mind in comfort. It inspires a happiness from within that, if anything, resembles a self-assuredness that all will be alright.

The mental stimulation carries over to the stomach. It encourages an appetite that heartily matches the mood. Having snacks prepared ahead of time will keep user from having to stand up especially as the Indica high hits.

Enhancing the sensation is its dominating body buzz that, before intensifying, first plants a heaviness from within. It becomes difficult to resist the physical effects with each puff until, eventually, users are enveloped in a deep relaxation that precludes sleep.

Because of its strong hold on the body, it is better to avoid smoking up during busy hours or reserve Kraken on lazy days. Otherwise, users will be forced to adjust the day’s activities.

Kraken carries a strong earthy aroma with floral hints that leave one thinking it has been freshly picked from the ground. The pungent fragrance also contains spicy hints of diesel accentuated by pine.

We don’t currently sell the Kraken seeds. Check out other Hybrid seeds in our marijuana seed bank.

Drawn in, Kraken overpowers the palate with its equally strong flavors of wet soil. Savoring it, however, reveals mild floral undertones that brings with it a tinge of sweetness. On the exhale, the taste of mint enhanced by pine leaves a cooling aftertaste in the mouth.

All strains cause adverse reactions and Kraken is certainly not an exception. Despite the fact it is not as potent as other strains, it still causes users to “green out” – a condition that combines dizziness with increased anxiety. A bout of paranoia may also come about especially when the bud is consumed excessively. For this reason, users must remember to pace and moderate usage.

Besides what was stated, there’s a large chance of feeling dehydrated when under the Kraken’s influence. The common symptoms that are a cottonmouth and a case of dry eyes. Both are barely noticeable though that most experienced users tend to ignore it completely. Still, if discomfort does arises, downing a few glasses of water and staying hydrated throughout the day will provide quick relief.

In delivering its euphoric effects, Kraken clears the mind. It eliminates stress and calms users overwhelmed by problems or tasks at hand.

At the same time, it instills a sense of inner peace that temporarily alleviates symptoms of depression and other mental health issues such as PTSD albeit temporarily. For long-term management, users must still seek the help of a health professional in order to pinpoint the source and finally ease the distress.

The strain’s ability to relax the body plays an important role in easing pain. By soothing the muscles, it keeps it from involuntarily contracting which often results in users wincing from a sharp sensation.

It is also this same mechanism that weakens spasms in the stomach, stimulates the appetite, and keep users from vomiting. For this reason, it is a great companion for cancer patients who have difficulty eating or users diagnosed with anorexia.

A natural sleep-aid, Kraken entices users to go to bed a few hours after the high all while feeling completely free of any physical or mental burden.

Kraken falls into the intermediate category of growing. It is not ideal for beginners but also not that difficult to master. However, under the expert care of a seasoned grower, it yields even more vigorously.

The strain is also quite a heavy feeder. It needs multiple nutrients and water a day for it to fully flourish. With ample food, its branches and stalks become thick enough to support itself especially as it hardens during the flowering period. Still, aspiring growers can stake the plant as its buds can weigh it down with its density. Otherwise, it is almost certain that the branches carrying the flowers will snap.

Indoors, there should be enough space between pots to allow room for its width especially it is also a heavy-brancher. It will need some trimming though its compact structure can sometimes harbor moisture that will develop into mold or mildew. Moreover, it needs to be properly aerated.

Kraken’s seeds are available online in feminized form which will ease its growing process. Alternatively, those that wish to bypass the process of germination may source clippings.

Kraken performs great indoors and can produce up to 18 ounces of buds per square meter after a mere 8 to 9 weeks of flowering.

In a Mediterranean climate, Kraken thrives and produces abnormally large returns. However, it is not uncommon for the plant to flower a little late in the northern hemisphere where the weather is cold. Still, growers harvest an impressive yield of 18 to 53 ounces of buds per plant by the last week of September or the first two weeks of October.

What is the Kraken strain yield?

How much THC does Kraken have?

What are the origins of the Kraken strain?

Have you ever smoked or grown your own Kraken? Please let me know what you think about this marijuana strain in the comments below.