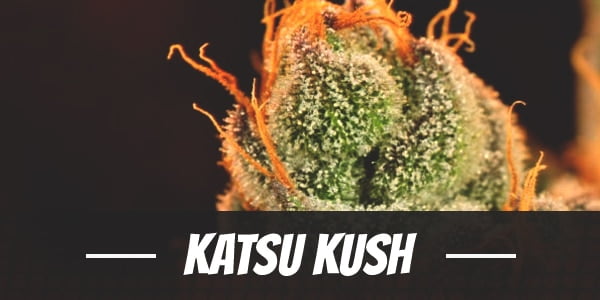 Katsu Kush is an elusive medical marijuana strain with an almost 1:1 CBD to THC ratio. Over the years since its introduction to the market, the Indica-leaning herb provides a reprieve against various health conditions through its uplifting mental high and soothing body buzz. Though purposively created for patients marijuana community, recreational use is still welcome.

Often nicknamed ‘Katsu’ after its breeder, Katsu Kush is a masterful cross between Hindu Kush and an unnamed strain. However, the Indica landrace’s strong body high is clearly evident in its offspring.

Katsu Kush has a toned down psychedelic high because of its low THC levels. It is not fast-acting either. Rather than overwhelming users with an intense onset, it creeps in slowly beginning with a subtle euphoric buzz that is only noticeable after the first few puffs.

Its effects begin in the mind and spread slowly throughout the body in a wave of relaxation. Often, the uplifting high leaves users feeling happy from within. More importantly, however, is its ability to soothe away tension and replace it with a heaviness.

As each hour passes, the once light pressure becomes a warm, fuzzy sensation. It ebbs down from behind the temples until users are fully enveloped by it. Eventually, the limbs become too heavy and a drowsiness sets in as users are slowly whisked away to Dreamland by Mr. Sandman.

As alluded to earlier, Katsu Kush is not a potent strain. Its THC levels average between 10% and 11% at most. As such, it is better suited for beginners, patients, or experienced users looking to relax.

Katsu Kush produces a pungent earthy aroma due to its high CBD content. Its undertones are sweet and spicy similar to that of Kush. Broken apart or combusted, a refreshing overtone of pine fills the air.

Katsu Kush tastes similar to Hindu Kush in many respects. It is sweet and spicy with the familiar earthiness of many Kush strains. On the exhale, the thick smoke leaves a lingering aftertaste of pine along with an herbal hint.

Like other strains, Katsu Kush causes the usual case of cottonmouth and dry eyes. This is normal though as moisture-inhibiting compounds in marijuana affect the salivary glands and tear ducts the most. Neither is a cause for concern though as they are bold mild. Moreover, they usually go away on their own but, if symptoms persist, downing a few glasses of water will immediately rehydrate the body.

Users may also experience a subtle headache while using Katsu Kush. Depending on the amount consumed, it is sometimes accompanied by a feeling of paranoia. This is a rare occurrence though, often a result of users smoking too much of a strain. For this reason, marijuana must always be used in moderation.

With 8% to 10% CBD, Katsu Kush is an exceptional medical strain. And, as an Indica-leaning strain, it provides a reprieve against various pain-inducing afflictions through its soothing body high.

One of Katsu Kush’s best uses is easing intraocular pressure which, if left unattended to, can lead to the early onset of glaucoma. At the same time, its antispasmodic properties temporarily relieve continuous and uncontrollable spasms that interfere with one’s ability to move normally.

Katsu Kush also promotes overall wellness by sedating its users. Multiple mental and physical health conditions, such as depression and fatigue, negatively affect the quality and quantity of sleep. Still, it remains one of the most important components of the healing process. Moreover, a good night’s rest does more when it comes to reducing stress.

Katsu Kush’s landrace genetics have certainly made it hardy. It is highly resistant against mold, mildew, and other problems caused by too much moisture in the air like bud rot. It can even withstand strong gusts of wind and cold weather.

In spite of its great performance outdoors, there are still many that prefer cultivating Katsu Kush indoors. Apart from better immunity against pests, a controlled environment allows growers to adjust major factors like lighting, temperature, and humidity to bring out the medical strain’s full potential. At the same time, it ensures users of a chemically balanced plant.

Because of its relatively short height, Katsu Kush rarely requires topping. Pruning is necessary though. Apart from aesthetic reasons, cutting away the dead parts of a plant encourages better light and air circulation. Similarly, nutrients distribute themselves to healthier budding sites. Once mature, it yields dense nugs that are surrounded by a milky coat of trichomes. Meanwhile, its sparse red hairs perfectly contrast its olive hue.

Sadly, despite its eye-catching buds and easy grow, its original breeders have opted to maintain a proprietary hold on its product. This is understandable though as it assures users of a premium CBD-enriched, medical strain.

It takes a short 7 to 9 weeks for Katsu Kush to blossom. However, it can flower as early as 6 weeks depending on the skill of the grower. Once mature, the plant produces 10 to 12 ounces of buds per square meter.

Katsu Kush flowers from the end of September to the start of October. Once ready for harvest, it yields at least 12 ounces of cured buds per plant.

Have you ever smoked or grown your own Katsu Kush? Please let me know what you think about this marijuana strain in the comments below.