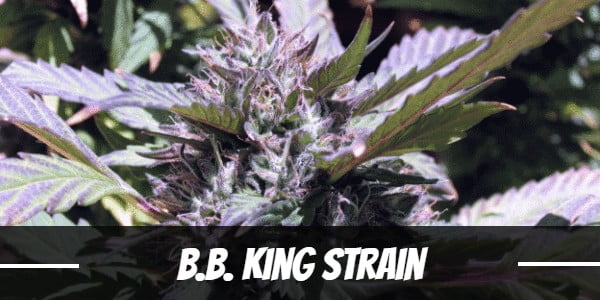 In his prime, the late Riley B. King, or B.B. King as he is popularly known, took the world by storm as the King of the Blues. During the nights he played his flatted notes and lowered chords, he swayed the hearts of listeners and soothed their souls. Its namesake strain has the same effect.

Like the monarch of the musical movement, the Indica-dominant B.B, King relaxes and calms users. But, instead of music, it does so through its THC levels of up to 16%. Moreover, its buildable high does not discriminate. It appeals to all users – including beginners.

In creating the limited edition B.B. King, MTG seeds merged the genetics of Blackberry Kush and Space Monster. From the former, it gained its sweet citric taste and scent of berries and oranges. Its almost narcotic high, on the other hand, is an obvious trait passed on by its Space Monster parent.

Aside from wonderful flavors and effects, B.B King is also appreciated for its ease of growth. Even amateurs can get the strain to yield a large number of buds. Thus, it’s perfect for both hobbyists and commercial growers alike.

B.B. King cerebral onset is marked by a subtle stimulating euphoria. In only a few puffs, it boosts moods and leaves users in an upbeat disposition. The happiness is contagious and prompts one to show off their widest, brightest smiles.

It is not uncommon to find oneself in a mental slump, especially in a dreary workplace environment. The clearheaded high, though, allows one to dream and think freely. And, as time goes by, the thinking tank is refilled with profound ideas and innovative solutions.

Gradually, an uplifting, tingling sensation creeps in. Wave after wave, it spreads throughout the body beginning from the temples. From whence the tension came from, a heaviness sets in and envelops the body. Deeply relaxed and totally comfortable, it becomes difficult to decline Mr. Sandman’s invitation to dreamland. For this reason, it is best to smoke B.B. King at night or on a lazy day.

B.B. King has a strong diesel overtone and citric undertones of lemons, oranges, and berries. To many, the peculiar chemical blend is reminiscent of pine-sol. Some may even say it reminds them of car freshener.

They say that to truly experience the flavor of a strain, one must draw it in. And, indeed, B.B. King does not disappoint. It blends together the taste of blueberries, oranges, and lemons in a sweet bowl of citric fruits. On the exhale, its diesel note leaves a chemical aftertaste in the mouth.

B.B. King is incredibly forgiving. In moderation, it only causes a bit of dryness in the mouth and, sometimes, in the eyes. The two are often mild and barely noticeable during the high. But, for beginners, the dehydration can be quite uncomfortable. In such cases, it is best to down a glass or two of water.

Although paranoia is commonly associated with potent Sativa strains, it is also a possibility when using B.B. King in large doses. Pacing and moderation, however, will keep such symptom away.

If anything, MTG Seeds prides itself in being one of the most prominent medical genetics company in the industry. Since 1996, they have produced a variety of therapeutic strains that are all aimed at providing a reprieve against certain mental and physical conditions.

Looking to buy seeds like B.B Kings? Check out our marijuana seed bank.

B.B. King, for example, is a source of comfort for users with mental conditions like depression and PTSD. Its happy high temporarily eradicates self-destructive thoughts from one’s mindset. More importantly, it gives one control over their stressors. And, in turn, it keeps users from spiraling down to negativity.

Backed by the excellence of its Indica genes, B.B. King’s best use is arguably physical. Its soothing high relieves any irritating pressure from the head, around the eyes, and down to the rest of the body. Meanwhile, its anti-spasmodic properties relax the sharp, stinging pain in the gastrointestinal tract caused by sudden contractions. By calming turbulence in the stomach, it appeases nausea.

As the high wanes, an overwhelming heaviness sets in the limbs. It relaxes the muscles and keeps users from stressing themselves. In time, the sedative effects begin to take effect and users doze off to sleep.

Over the years, MTG has gained a reputation for their eco-friendly growing methods and resilient plants. As such, it is not surprising to see B.B. King thrive in the great outdoors where its sturdy stalks are well aerated and exposed to natural sunlight. Meanwhile, its mold and cold resistant genes allow it to thrive regardless of the dipping temperatures and fickle humidity levels. Height management is also not a problem as the plant is naturally short.

Of course, this does mean that the bud does not grow well in a greenhouse. If anything, it protects it from being ravaged by pests and bugs. Not only that, a controlled environment allows one to control deciding factors like lighting, temperature, and humidity. To mimic an au naturel environment indoors, using organic mediums like soil is a must. Besides bringing out the B.B. King’s full potential, it also enhances its flavors.

B.B. King’s tolerance to common growing mistakes makes it great for inexperienced growers. Although, one great thing to know is that its chemical profiles remain stable regardless of who is growing it.

As an Indica-leaning strain, B.B. King is among the many strains that flower faster than expected. In fact, it usually only takes about 7 to 8 weeks before each square meter produces at least 10 ounces of buds per square meter.

In a garden, each plant of B.B. King produces more than 12 ounces of buds before the first week of October.

What is the B.B. King strain yield?

How much THC does B.B. King have?

What are the origins of the B.B. King strain?

B.B. King was created from a mix between Blackberry Kush and Space Monster.

Have you ever smoked or grown your own B.B. King? Please let me know what you think about this marijuana strain in the comments below.