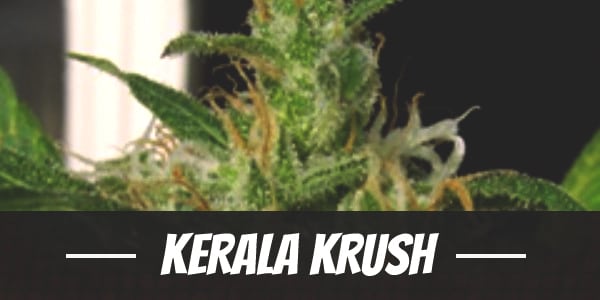 Sativa landraces from Kerala and nearby areas along its mountain slopes are some of the best in the world. Hence, cannabis explorers have traveled from far away to take samples of its world-renowned buds. Among the companies that have benefited from the indigenous variety are The Flying Dutchmen.

In developing Kerala Krush, the breeders took a Kerala landrace and improved upon it using a Skunk No. 1. The latter posed additional yields and improved potency for the sturdy Sativa. Indeed, the effort was well worth it as the offspring is one that brings back life into a tired soul.

The exotic flavors of Kerala Krush usher in a zesty tanginess that wakes one from fatigue. And, with its potent THC levels of up to 22%, it delivers a head-focused uplifting high that inspires users to complete tasks or go out and spend a good time with friends.

Not to mention, Kerala Krush is an impressive performer in the grow room. Its strong landrace genetics give it an advantage in outdoor growing. Meanwhile, the influence of its Skunk parent assures growers of vigorous yields.

Kerala Kush is a quick-acting strain that introduces its onset within minutes after the first few puffs. It begins with an energizing buzz that clears the mind and uplifts it. As a result, it also renews motivation.

Like a cup of coffee, the strain awakens casual users who need a little boost from fatigue. It heightens focus and improves one’s productivity through its engaging head high. Happiness often follows too, as enthusiasts experience fulfillment as each task is checked off one’s list.

After about an hour or two, a light pressure from the temples trickles down. It surges in the muscles, subtle at first before gradually intensifying into a wave of relaxation that soothingly crashes on to the body’s shores. However, rather than sedating users, it adds vigor in each step and pursuit of projects.

The overall experience that Kerala Kush offers makes it an impressive daytime smoke.

Kerala Krush has an exotic smell, to say the least. The sweet tropical aroma of mangoes fills the air once a bag of buds is opened. Complementing it are strong herbal overtones that interestingly develop into a spicy woodiness as it is crushed or combusted.

Taking a whiff of Kerala Krush is enough to take one on a tropical adventure. It fills the palette with classic tropical flavors of spices, herbs, and wood. On the exhale, it leaves an earthy aftertaste with a hint of sweetness.

A cottonmouth and dry eyes are two of the most reactions to marijuana. Although rare, it is sometimes accompanied by dizziness, anxiety, and a subtle feeling of paranoia. All are mild, however, and often go away on its own. Still, growers may take measures such as downing a few glasses of water to ease the symptoms.

Presumably, Kerala Krush is a recreational strain that caters to users with a penchant for high THC. Still, its cannabinoids provide comfort to patients dealing with a myriad of physical and mental maladies.

Its psychoactive compound, for example, plays a vital role in temporarily relieving symptoms of depression and PTSD. By inducing a calming clarity, it appeases the overwhelming anxiety brought about by chronic stress.

Apart from relaxing the mental faculties, its uplifting high also reenergizes the body. It delivers a physical buzz that thoroughly gets rid of fatigue. At the same time, it eases pain caused by cramps or the involuntary contraction of muscles. In doing so, it also prevents users from vomiting due to nausea.

It is a must to top Kerala Kush early on the growing process, especially when it is cultivated indoors. Otherwise, it can lead to its own demise as each plant experiences a growth spurt during the flowering phase. Apart from keeping the growing space from cramping, pruning the plant will also help evenly distribute air and light among the lower nodes.

When grown in the northern hemisphere, Kerala Krush may need to be protected from the extreme cold with a temporary enclosing. One thing to note is that it may take longer to flower too as it tries to make the best out of the short summers.

Growers may utilize the Screen of Green technique to encourage Kerala Krush to produce more colas. This will result in higher yields and better trichome production. Likewise, providing it with proper nutrients that correspond to its growing stage will improve its health and performance.

At the moment, its breeders have only released normal seeds. Growers will to resort to pre-germination techniques like soaking to improve the chances of growing a female then exposing it to low stress to keep it from turning into a hermaphrodite. Alternatively, sourcing a clipping is also possible.

An indoor grown Kerala Kush can take between 9 to 11 weeks to fully bloom. Once ready for harvest, however, it will reward growers with up to 14 ounces of buds per square meter.

Cultivators will find flowers blossoming from the middle of October to early November. Although, depending on the weather conditions, it can extend up to the second or third week. Regardless, it will yield up to 28 ounces of buds per plant.

Have you ever smoked or grown your own Kerala Krush? Please let me know what you think about this marijuana strain in the comments below.