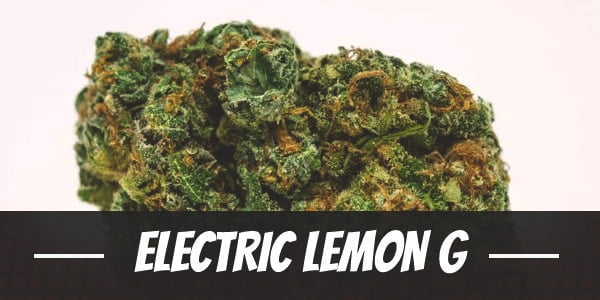 Electric Lemon G truly lives up to its name. It is a special herb with a zesty smoke that delivers an electrifying rush of energy that wakes users up from lethargy. Moreover, it has a THC content of 18% to 24% that takes users on a happy cerebral trip beyond the skies.

In creating the strain, T.H. Seeds took the Indica-dominant G13 for its soothing body high then crossed it with the influential Northern Lights #5. From the two, Electric Lemon G gained its sturdy structure, vigorous trichome production, and increased yields. However, its citric terpene profile and strong energizing effects are from an unknown lemon-flavored strain.

Used in place of coffee, Electric Lemon G reenergizes users to seize the day. However, rather than the jittery and heart-racing side effect, the Sativa-dominant bud relaxes the body until one is free of stress.

During the initial onset, a rush of euphoria clears the mind. It leaves users feeling upbeat as happy thoughts play like a sequence. While others prefer to bask in the uplifting buzz, there are casual users who take advantage of the mental clarity to complete tasks or pursue passion projects.

After about an hour or two, a tingling sensation trickles down from the temples. It soothes the muscles while a subtle gush of energy flows through the body. Although intense, it does not overwhelm users with its physical buzz. Instead, the blanket of relaxation allows one to move around with ease.

Keeping it from overwhelming users is the initial head high. Combined with the relaxing effects, as well as the heightened sense of motivation, users stay focused throughout tasks for long periods of time without feeling tired.

Even when kept in an airtight container, the pungent smell of lemon and citrus permeates from a group of Electric Lemon G. Enhancing it is a sweet lime that intensifies once the buds are broken apart and combusted.

Drawn in, the citric flavor of lemons and lime swarms the palate. There is a subtle sweetness which hints at its ripeness. During the exhale, it leaves a subtle earthy aftertaste that lingers even after the exhale.

Like other strains, Electric Lemon G induces a dry spell that is mostly felt around the eyes and in the mouth as cannabinoids begin to interfere with the body’s natural ability to produce moisture. Though mild, it can be easily managed by staying hydrated throughout the day.

Although rare, the herb can sometimes green users out. It is a condition characterized by dizziness that, as it continues to disorient the mind, can lead to anxiety. Most of the time, however, one only experiences a headache. Still, it is best to pace consumption by slowly increasing dosage over time.

Presumably, Electric Lemon G is a recreational strain. Still, it contains a myriad of cannabinoids that appease a myriad of health conditions. Its happy high, for example, calms the mind as well as enhance the mood. As such, it makes for a great a stress reliever and anti-depressant.

Meanwhile, its energizing high relieves fatigue while simultaneously removing aches and pains in the body. In wrapping the body in relaxation, it eases users into a state of sedation until eventually one falls into a deep, unencumbered slumber.

At the moment, Electric Lemon G is only available in regular form. This means that a finished batch is likely to contain at least 50% males. As such, growers will have to apply pre-germination methods like soaking to produce more females. Meanwhile, utilizing Low-Stress Training methods will keep it from turning into hermaphrodites.

Like other Sativa-dominant strains, Electric Lemon G has a propensity for long hours in the sun in a warm climate. As such, it thrives best in a Mediterranean or equatorial regions. This is not to say the plant will not flourish in the northern hemisphere. On the contrary, it flowers just as abundantly although for an extended flowering period.

For this reason, many prefer growing the strain indoors where it is easier to adjust factors like temperature, lighting, and humidity. It will need to be topped early though as it can grow relatively tall. Trimming and bending will improve light, air, and nutrient distribution.

Electric Lemon G has an indoor flowering period of 9 to 10 weeks. Once mature, it yields 11 to 12 ounces of buds per square meter. However, it is possible to harvest more when cultivating the strain using the Screen of Green method.

Outdoors
Outdoors, Electric Lemon G flowers from the middle to last week of October. At maturity, it yields at least 12 ounces of buds per plant.
Have you ever smoked or grown your own Electric Lemon G? Please let me know what you think about this marijuana strain in the comments below.