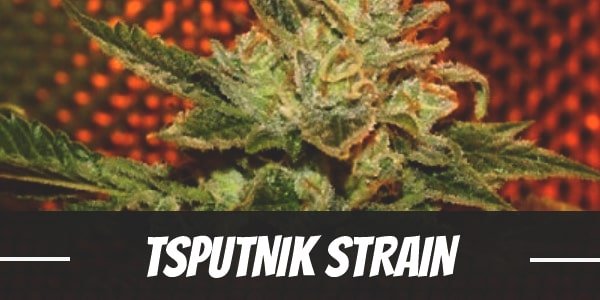 One can say that space exploration truly started with the Soviet Union’s launch of Sputnik # 1 on the 4th of October 1957. with it through the skies were the people’s dreams and the hope of a better tomorrow. Without a doubt, it was a monumental moment for mankind that inspired hundreds for decades. In fact, a sativa-dominant cannabis strain was named after it.

Sputnik, like its inspiration, takes users on a psychedelic flight beyond the atmosphere. Its rush of euphoria also improves creativity while clearing away distracting thoughts in the mind. At the same time, its rush of energy gets rid of fatigue so one feels refreshed from any accumulated stress.

In creating the strain, breeders took the space-inspired strain Apollo 13. It is an extremely rare bud with only 500 seeds circulated from the original stock and an equally exclusive cut. In spite of this, it remains popular for the notes of fruit and tea in its smoke that deliver a cerebrally energizing high.

It was later crossed with the Indica-dominant Black Russian. With its potent THC levels, it delivers a heavy-hitting body buzz that deeply relaxes one before slumber. Its offspring garnered the same traits, albeit with a more energizing initial effects.

At the onset, Sputnik delivers a rush of unmatched energy to users. Of course, like most strains, the effects of its uplifting buzz start at the temples whereby a sense of clarity plants itself in the mind. It leaves users feeling cheery as happy memories replace negativity.

The upbeat disposition helps users trudge through the workday. It keeps stress away while creating a path for ideas to flow and form freely. Naturally, one experiences a breakthrough in creativity. With enhanced motivation, one can focus and finish tasks without feeling tired.

After about an hour or two, a tingling sensation trickles down from the temples. It is the same rush of energy at the initial onset that eventually seeps into the muscles. Its intensity removes tightness in the muscles that often result in a person’s stiffness. However, it does not overwhelm the body. Instead, it turns the body into a well-oiled machine that is agile enough to perform various tasks throughout the day.

Sputnik is best used in the morning because of its great wake-and-bake qualities. It brings back vigor to a fatigued mind and body so one may improve productivity or pursue projects passionately. However, its THC of up to 23% can be quite overwhelming when used beyond personal tolerance. Still, this should not keep users away from the strain as it is quite versatile. After all, its potency begins at 14%.

A bag of Sputnik can easily fill the room with its strong overtone of sweetness. There is a floral tinge too, reminiscent of tea. However, it is quickly drowned out once the pungent scent of ripe fruit is released from either crushing the buds or combusting it.

Drawn in, Sputnik fills the palate with the floral taste of herbal tea. There is a subtle sweetness that seemingly indicates a teaspoonful of honey had been added. However, as the smoke lingers, a sour but fruity aftertaste washes over the mouth.

Sputnik can turn into an intimidating strain when smoked beyond individual tolerance. Often, it incites a dizzying side effect that develops into a subtle feeling of paranoia as the senses becomes immensely heightened. For others, however, it can be a simple case of headaches. Still, users should consume the bud in moderation for a pleasant experience.

Typical of marijuana, Sputnik casts a dry spell in the eyes and the mouth as its cannabinoids interfere with moisture production. Its mildness usually make it easy for seasoned users to ignore its effects. However, for beginners, downing a few glasses throughout the day will help manage symptoms.

Although it is predominantly Sativa, Sputnik has a relatively medium height. This means that it fits most growing spaces but will have to be topped early if there is not enough vertical space. Additionally, it may also have to be pruned for even circulation of air and light among the lower nodes. Removing dead parts of the plant also improves nutrient distribution among the healthier budding sites.

Sputnik reacts well to the Screen of Green methods wherein growers place a screen above a batch and weave any branches that go through. This will produce more colas and budding sites for higher yields. Pairing this Low-Stress Training technique with Super Cropping will further improve its already high trichome production.

During the flowering period, Sputnik produces a pungent scent that can easily fill the growing area. For growers who prefer not to have the smell permeating in the room, installing a carbon filter is a necessity. A proper exhaust system will help reduce the odor as well as reduce high humidity levels.

Unlike other Sativa-dominant strains, Sputnik stands out as though it were a byproduct of excellent Russian engineering with its short flowering period. After 7 to 9 weeks of blossoming, it yields between 12 to 16 ounces of buds per square meter. Under the hands of an expert, it can yield much more.

In the northern hemisphere, Sputnik blossoms from the last week of September to the middle of October. Growers can expect at least 16 ounces of buds per plant.

What is the Sputnik strain yield?

Sputnik yields 12 to 16 ounces per square meter indoors and 16 ounces or more per plant outdoors.

How much THC does Sputnik have?

What are the origins of the Sputnik strain?

Sputnik was created from a mix between Skunk #1 and White Widow.

Have you ever smoked or grown your own Sputnik? Please let me know what you think about this marijuana strain in the comments below.