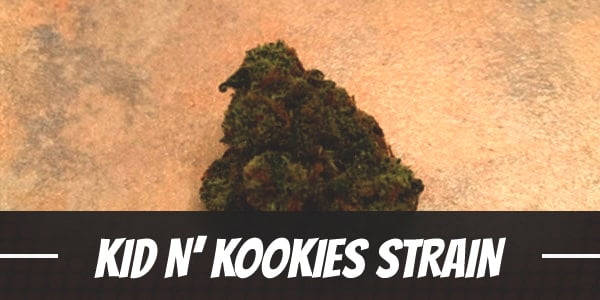 Kid n’ Kookies is a shatter product with a bright amber hue that turns heads. Meanwhile, its dense flowers have the same eye-catching color along with a thick coat of terpenes and trichomes. Its scent is quite distinct as well. A single batch will fill the room with a strong acrid smell along with a subtle undertone of pine and wood.

In developing the strain, Loud Seeds and Harry Blaze teamed up as Green Halo Farms. The breeders used a Forum cut of Girl Scout Cookies which exhibits a stronger body high. Snowman OG was later added to improve the overall flavor and effects of the latter.

The moniker Kid n’ Kookies is heavily inspired by Kid n ‘Play, a rap duo that earned a wide audience for hits like ‘Aint Gonna Hurt Nobody?”

Kid n’ Kookies is a predominantly Indica strain that induces a stimulating onset similar to that of Sativas. It starts with a rush of euphoria that clears the mind and invigorates the body. Within minutes after the first two or three puffs, users develop an upbeat disposition while experiencing a rise in motivation.

In spite of this, most casual users prefer basking in the innate sense of happiness it inspires. It brings smiles back on to the faces of its users. Further enhancing the mood are cheery memories that leave one in a fit of giggles. However, it is best to have some snacks prepared ahead of time. Its cerebral effects boost the appetite as it provokes thoughts.

The same tingling sensation at the onset gradually develops into a soothing buzz that relaxes the body. It surges through the muscles as it undoes knots that bring tension. Although intense, it rarely overwhelms users in a couch lock especially when used in moderation. Hence, it can be used as a late afternoon or early evening treat that soothes one before bedtime.

With that said, one must always remember that the strain is powerful. Used beyond limitations, it can overstimulate the mind while tranquilizing the body.

Kid n’ Kookies has an earthy musk reminiscent of rain hitting soil on a damp day. It has notes of woody pine blended with nuts along with a hint of skunk. Breaking apart the buds or combusting it intensifies the overall terpene profile.

Enticing the palate is the taste of refreshing pine. It leaves an overtone of wood and undertone of freshly unearthed nuts. On the exhale, Kid n’ Kookies leaves an aftertaste of skunk that lasts for hours.

Dry eyes are a likely occurrence when using Kid n’ Kookies and, as cannabinoids interfere with saliva production, it is accompanied by a cottonmouth. Downing a few glasses of water will help mitigate the discomfort in case the long-lasting side effects become irritating. Although rare, it is possible for it to trigger anxiety and paranoia. It is usually limited to a keen awareness that leaves one feeling dizzy but users should still avoid greening out by using the strain in moderation.

Chronic stress is a problem that must be dealt with at its early stages. Otherwise, it can lead to the development, early onset, or exacerbation of a wide variety of afflictions. Among it is depression which also exhibits a few similar symptoms such as having difficulty functioning and an overwhelming dread regarding difficulties. Thus, it is important to rest and relax before it gets out of hand.

To this end, Kid n’ Kookies offers short-term relief. It induces a happy high that temporarily enhances the production of happy hormones. Meanwhile, its calming euphoria calms the dreadful anxiety that comes with being constantly exposed to stress. Replacing it is an upbeat disposition that temporarily manages symptoms of mental health issues like depression and PTSD. However, for long term relief, it is better to seek out the help of a medical professional.

High levels of THC are correlated with analgesic effects. Thus, it should come as no surprise that the largely Indica strain appeases a wide variety of aches and pains all over the body. Its soothing buzz has a relaxing effect on the muscles and, as a result, prevents it from suddenly contracting in spasms. Meanwhile, its antiemetic properties reduce turbulence in the stomach that can lead to unwanted vomiting. Hence, it is a great source of comfort to patients undergoing chemotherapy and dealing with its nauseating side effects.

Kid n’ Kookies exhibit the typical traits of an Indica plant. It is short, sturdy, and branchy. Not to mention, its frame is filled with dense foliage. Grown indoors, it will need to be thinned out as moisture can seep into its crevices or block light from the lower nodes which will stunt its growth.

Pruning or trimming can be an effective solution along with installing an efficient ventilation system. For even light distribution, growers may utilize training methods such as lollipopping which will also improve aeration. The Sea of Green technique, on the other hand, will increase yields by planting more in a single square meter. This is especially true when using a hydroponics setup that will deliver nutrients directly to the roots.

Outdoors, it will need to be protected against the frost brought by an early winter. It can kill the plant in a single night. It will also keep Kid n’ Kookies safe against strong winds and heavy rains that might break its branches or stalks in half. With that said, yields from a batch grown in either gardens or farms will enhance its terpene profile due to using soil as a medium.

Kid n’ Kookies has an indoor flowering period of 7 to 9 weeks with each square meter producing at least 10 to 12 ounces of buds.

In the northern hemisphere, Kid n’ Kookies flowers from the last week of September to the middle of October. Once ready for harvest, it yields at least 12 ounces of buds per plant.

Have you ever smoked or grown your own Kid n’ Kookies? Please let me know what you think about this marijuana strain in the comments below.