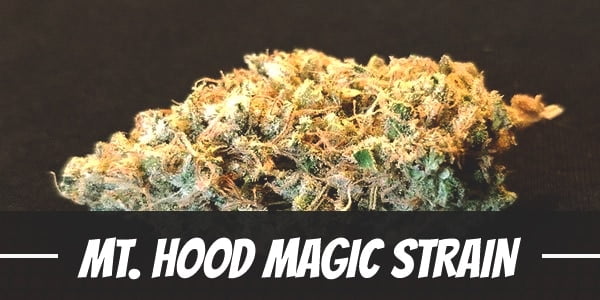 Mt. Hood Magic is a famed strain with eye-catching flashes of orange and sparkling golden trichomes against a backdrop oft5dgxdgd0067s jgegd deep greens. When its buds are combusted and inhaled, it delivers a unique head-to-toe high that is similar to that of a hybrid. It may have to do with its existence as both a potent Sativa and Indica leaning variety. Between the two, the most common is the latter.

Its history can be traced back to a breeder crossing Northern Lights # 5 and Durban Poison. The former is a formidable Indica that won multiple awards during the 90s. In fact, it is considered as one of the most famous and influential strains throughout the history of cannabis. Meanwhile, the latter is a potent Sativa with a worldwide following for its ability to induce a cerebrally stimulating head high for a productive day ahead.

In Mt. Hood Magic, both effects take center stage. Hence, it is not uncommon for its Indica-leaning variety to deliver an energizing euphoria. And, from the predominantly Sativa sibling, one can expect a heavy buzz that thoroughly soothes the body with its heavy-hitting high.

Mt. Hood Magic is a versatile strain. It has THC levels that range from 14% to 19% which provide both beginners and seasoned users with a pleasant high. During the onset, it delivers an energizing buzz that immediately invigorates the mind and the body. It starts as a rush of euphoria that improves moods and heightens motivation. As it persists, users are left with a mind cleared of its fogs and instead filled with cheery memories.

A soothing physical buzz eventually ebbs down from the temples. Although intense, it is not at all overwhelming and rarely does it induce a couch lock. However, it does free the muscles to bring back one’s initial limberness. Users move around like a well-oiled machine without restriction.

In spite of its Indica genes, Mt. Hood Magic can be used both in the morning and the evening. It has a soothing physical buzz that lulls one to a deep sleep when used beyond moderation. Most of the time, however, users are only released of tension and tightness for better movement.

Mt. Hood Magic has a strong earthy profile complemented by a subtle sourness. Breaking it apart releases its citric undertones of lime and berries. Combusting, on the other hand, produces a skunky overtone enhanced by mint.

Enticing the palate is its citric undertones of lime and subtle undertones of berries. Its fruitiness is enhanced by the cooling taste of mint. On the exhale, it leaves a skunky aftertaste with a hint of earth that lasts for hours.

All cannabis strains have moisture-inhibiting cannabinoids. Thus, it should come as no surprise that users also experience dryness in the eyes and mouth while using Mt. Hood Magic. It is not at all a cause for concern due to its mildness but users may down a few glasses of water toe ease the discomfort. If anything, users should only be wary of over consuming the buds. Otherwise, one will be left with a disorienting awareness that induces a mild paranoia.

Mt. Hood Magic has moderate levels of THC that induces a head-to-toe high with significant therapeutic benefits. Along with other cannabinoids such as CBD and terpenes, it provide patients with a reprieve against a myriad of mental and physical health afflictions.

In delivering its happy high, it enhances the mood and uplifts spirits. It temporarily manages symptoms of mental health issues like depression, PTSD, and anxiety through a calming euphoria that slows down the fast-paced thoughts that can sometimes overwhelm the mind with negativity. At the same time, it works as a stress reliever that keeps users from suffering the consequences of chronic dread.

Its tranquilizing buzz, on the other hand, appeases a wide variety of aches and pains. It envelops the body in a sense of peace beginning from the temples. Acting as an anti-inflammatory, it soothes redness and reduces swelling by relaxing the muscles thoroughly. At the same time, it also prevents it from contracting.

Paced moderately,  it can be used as a sleep aid. The blanket of relaxation eventually tucks users to bed with its sedating properties. It enhances the quality and quantity of slumber so one wakes up feeling ready to face the day.

Mt. Hood Magic has an Indica frame – short and sturdy. Its stalks and branches are thick which signify its resistance against disease along with the cold. Compared to tropical strains, it has a far higher chance of surviving the weather of the northern hemisphere. Hence, it is a great strain to grow outdoors.

The natural light from the sun provides Mt. Hood Magic with enough energy to produce an even higher yield. However, the lack of predictability or control over growing factors often entice growers to cultivate it indoors. A controllable environment allows one to adjust temperature, lighting, and humidity.

Although grow lights cannot supplant the sun, but growers can use high intensity lights for higher yields. For better aeration, one can install an efficient ventilation system that will wick off moisture in a batch so it is not ravaged by humidity-related problems like mold or mildew. Supplementing it with a fan will ensure that the plants do not suffer from the heat.

Its structure works best with the Sea of Green setup – a method which requires growers tilling at least 4 seeds in a single square meter for higher yields. It takes advantage of its frame to enhance yields. To enhance flavors, using soil as a medium is a great choice. However, a hydroponics setup will increase bud production.

Mt. Hood Magic has an indoor flowering period of 7 to 9 weeks. It yields at least 10 to 12 ounces of buds per square meter once it is ready for harvest.

In the northern hemisphere, Mt. Hood Magic blossoms from the last week of September to the second or third week of October. It flowers well with each plant producing at least 12 ounces of buds at harvest.

Have you ever smoked or grown your own Mt. Hood Magic? Please let me know what you think about this marijuana strain in the comments below.