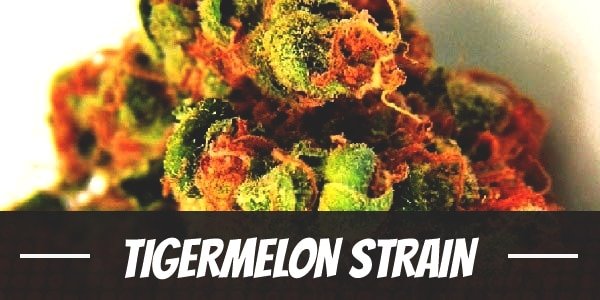 Tigermelon is a potent strain that secures itself in the hearts of enthusiasts with its sweet-tasting smoke and head-to-toe effects. It entices the mind and invigorates the body to bring back a lost sense of motivation or faltering creativity levels. Moreover, it is not only wonderful for recreational use but also as a therapeutic aid as well.

To create the strain, the breeders used an Uzbekistani Indica, Chemdawg, and Apollo 11. The last two have an uplifting head high that enhances the mood with its euphoric rush and stress-crushing physical buzz. Meanwhile, the pure hash plant has a strong frame that improves the growth profile of its offspring.

The three-way cross results in the delicious strain that many enthusiasts recognize. Its taste is almost similar to the real Tigermelons with a sweet tropical flavor along with an undertone of melon. At the same time, it emulates the lovely stripes of gold that enhance the green of its buds.

Tigermelon is a potent strain with high levels of THC ranging from 20% to 22%. Its slow-starting onset though is definitely that of an Indica. It sets in 15 minutes after the first two or three puffs. Leaving users happy is its gradual rush of euphoria. Though its effects are not as quick, it can last for hours even after the high.

It has a stimulating effect on the mind, creating free space for thoughts to flow and form. In doing so, it clears away doubts and negativities to boost confidence. Removing the cobwebs and restarting gears is a buzz of creativity that also reignite motivation.

Slowly, a tingling sensation builds in the temples. It trickles down to the toes as it gradually intensifies. Enveloping the body is a blanket of relaxation that prevents the muscles from constricting in pain. Instead, users move like a well-oiled machine while finishing tasks or going through projects.

Because of its wake-and-bake qualities, Tigermelon can be used in the morning as well but only at moderate amounts. It is still an Indica-leaning strain that lulls users to sleep or a couch lock if used beyond moderation.

Tigermelon has a strong tropical scent. It tastes much like mangoes, pineapples, and oranges with a hint of sweet melon that counters the sharp citrus after breaking apart the buds. Meanwhile, combusting it releases a subtle hint of pine.

Tigermelon introduces a delicious tropical flavor into the palate. Swirling the smoke in the mouth brings out its dominant taste of oranges, pineapples, and mangoes. Complementing the sweet citrus is a subtle refreshing pine. Meanwhile, on the exhale, it leaves a melon aftertaste.

Moisture-inhibiting cannabinoids always result in dry eyes and a cottonmouth. Both are unavoidable but mild. Still, users should avoid exacerbating the discomfort through alcohol or caffeine. Opting for water is a better choice when it comes to appeasing the dry spell.

Tigermelon is a reliable strain. It eases a myriad of maladies through its cannabinoids such as THC, CBD, and terpenes. Its head-to-toe high is most effective against chronic stress, which can lead to the early development or exacerbation of health problems. It enhances the production of happy hormones to reduce high levels of stress.

It delivers a calming euphoria that not only uplifts the spirit but also enhance the mood. Through this, it is able to appease the self-depreciating thoughts that overwhelm the mind. It provides comfort to long-sufferers of depression or other mental health issues like anxiety and PTSD.

Meanwhile, its soothing physical buzz thoroughly relaxes the body. It removes possible contractions and constrictions in the muscles that result in either spasms. More importantly, it reduces pains and aches beginning from the temples. Similarly, it relaxes any turbulence in the stomach that rob users of appetite and replace it with vomiting instead. This eases the nauseating effects that cancer patients suffer from after a chemotherapy session.

Tigermelon is a sturdy plant that perfectly represent its Indica lineage. It has a hardy frame that can withstand a variety of growing conditions such as strong winds. At the same time, its thick branches and stalks allow the plant to persist in the cold. Because of this, it can be grown in the gardens or farms of the northern hemisphere.

Although it is forgiving of the cool and damp weather, it is still best for Tigermelon to receive the significant amounts of light. Hence, it is essential that growers cultivate the plant in a strategic area where it is easy for sunlight to penetrate. Clearing away some obstructions is also necessary. During harsh weather, growers may either move the plant indoors or keep it safe inside a temporary enclosing.

Tiger Woods is a rare hybrid strain that is known for its ability to treat anxiety and chronic pain. Read our full review!

Cultivating the plant indoors is an option too. Growers can easily adjust lighting, temperature, and humidity levels. But, it will need to be pruned often as its dense foliage can get in the way with even light distribution and aeration in the lower nodes. Thinning it out will prevent the development of moisture-related problems such as mold or mildew. Otherwise, the high level of water in the air can rot the buds and the roots which will stunt its growth and produce.

It is a great candidate for the Sea of Green method, which encourages growers to plant at least four seeds in a single square meter. In this way, one can entice it to yield higher while optimizing it for small spaces. Another way to increase turnout is by utilizing hydroponics as a medium. It doubles both bud and trichome production but, for better flavor, one can also explore the use of soil instead.

TIP: Buy seeds like Tigermelon at my seed shop

It takes between 7 to 9 weeks for Tigermelon to produce flowers. Growers can expect at least 10 to 12 ounces of buds per square meter at harvest.

Tigermelon blossoms from the last week of September to the middle of October. Each plant is expected to produce 12 ounces of buds but can yield higher.

Have you ever smoked or grown your own Tigermelon? Please let me know what you think about this marijuana strain in the comments below.