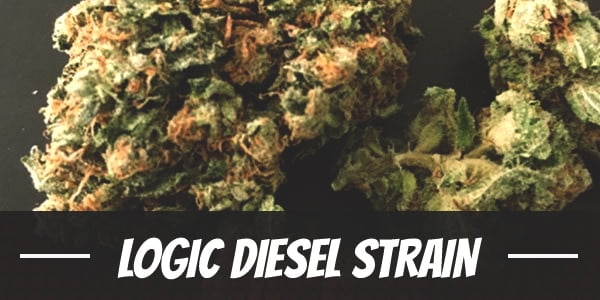 Logic Diesel is a strain named after the famous DJ Logic. The turntablist gained fame for his nu-jazz and acid jazz music along with the added oomph of a live band. It is said that, in the creation of the bud, he disc jock deliberately asked the breeders to name it after him. However, that is an urban legend.

Regardless, the well-balanced hybrid built a name for its own. Logic Diesel delivers a stress-crushing buzz of energy that temporarily relieves the problems caused by over work or fatigue. Meanwhile, its subtle rush of euphoria uplifts the spirits and enhances the mood.

In creating the strain, GroundSwell Cannabis Boutique used Mystic Kush and NYC Diesel. The merge produced an offspring with a heavy chemical smoke with hybrid range of effects that start from head to toe.

Logic Diesel has an energizing onset similar to that of Sativas. However, its effects usually begin about 15 minutes after the first two or three puffs. Still, once it settles, a change in behavior is instantly noticeable. Smiles grow broader and wider as it uplifts the mood. The body, on the other hand, lightens so users can move freely.

For casual users, the upbeat disposition becomes a precursor to mental clarity. It brings out fresh perspectives as the free space creates a path for thoughts to flow and form. It is not uncommon for users to experience a rise in creativity. Encouraging one to share ideas is a heightened sense of confidence. Albeit, one should be careful of becoming too chatty.

As alluded to earlier, the hybrid induces a buzz of energy that lightens the body. It does so by kneading the muscles to remove any stress-caused tension or fatigue that prevent limber movement. Along with an enhancement in focus, users can work on tasks to complete projects. Although intense, it is not at all overwhelming. It will not cause a couch lock but using beyond one’s individual tolerance can leave a heaviness in the limbs.

Logic Diesel, as its name suggests, has a strong chemical scent similar to diesel. It has a skunky undertone complemented by the a sweet sandalwood that reveals itself once the buds are broken apart. Upon combustion, its buds release a spicy fuel overtone.

Logic Diesel’s acrid smoke introduces itself as a sharp diesel in the palate. It can irritate the throat and cause a bout of coughing. But, swirling it brings out its overtones of spicy fuel and undertones of sandalwood. On the exhale, it leaves a sweet aftertaste that tones down the taste of skunk and chemicals.

Dry eyes and a cottonmouth are two of inevitable reactions to smoking Logic Diesel. Cannabinoids have a moisture-inhibiting effect on the body. It is mild but the subtle irritation can be managed by downing a few glasses of water. A rare but more concerning side effect is a keen awareness that leads to either a disorienting dizziness and heightened levels of anxiety. To avoid, users should practice moderation or stay cautious especially with its high levels of THC.

Logic Diesel is an impressive recreational strain. However, it is also of significant therapeutic value to many patients in the medical marijuana community. It has a restorative head to toe high that ease a myriad of maladies that diminish the quality of life albeit temporarily.

One of its best qualities its euphoric head high. It uplifts the spirits and enhances the mood while simultaneously slowing down the fast-paced thoughts that overwhelm the mind. Its anxiolytic properties provide comfort to patients dealing both stress and anxiety. At the same time, it helps manage symptoms of depression and other mental health issues like PTSD.

On the physical, its energizing high lightens the body of its heaviness. It eases away aches and pains as it kneads the muscles free of either tension or tightness. Because of this, it not only works well against chronic pain but also for either fatigue or over exhaustion.

Logic Diesel exhibits both Indica and Sativa traits. Its stalks are thick along with its branches which enhance its ability to withstand various growing factors such as the cold. Because of this, it grows well in the northern hemisphere. It is also a great beginner’s strain.

It will need to be planted strategically so it can soak up sunlight. In the early winters, having a temporary enclosing will protect the plant against the winter which can kill it overnight. At the same time, it provides protection against heavy rains which may snap its branches in half. It is also precisely for this reason that many growers prefer cultivating it indoors.

With that said, it will need to be topped early and pruned often. This will keep the plant short as well as initiate the flowering period. On the other hand, thinning it out increases airflow in the lower nodes. Growers can also supplement it with an efficient ventilation system that wicks away excess moisture that can develop into humidity-related problems.

Both the Sea and Screen of Green method work best with Logic Diesel. The former takes advantage of the small space by increasing the number of seeds planted n a single square meter. Meanwhile, the latter increases yield by weaving branches into a net. Ensuring each receive proper lighting will increase bud production.

After 8 to 10 weeks, Logic Diesel produces between 12 to 14 ounces of buds per square meter. Growers can increase yields by training the plant.

In the northern hemisphere, Logic Diesel flowers from the last week of September to the middle of October. It yields at least 14 ounces of buds per plant at harvest.

Have you ever smoked or grown your own Logic Diesel? Please let me know what you think about this marijuana strain in the comments below.