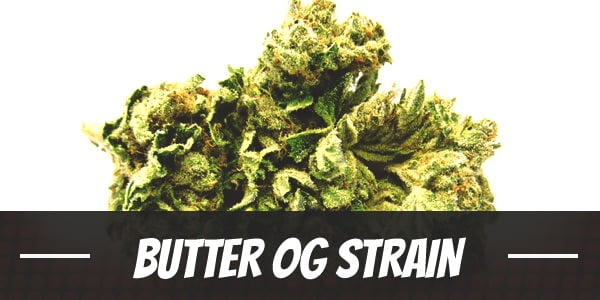 Butter OG is a mysterious strain. However, this has not stopped it from growing into a massive hit among enthusiasts. It has a buttery smoke, as its name suggests, that have a soothing effect on the throat. And, as it delivers its heavy-hitting high, the body becomes tranquilized in relaxation and sedation.

Although widely recognized as a recreational strain, Butter OG has good roots in providing therapeutic relief. It delivers a calming head-to-toe high that temporarily manages symptoms of mental and physical afflictions. It improves moods while allowing patients to bask in the bud’s restorative effects.

Giggling is not uncommon when one uses Butter OG. After all, it does leave users feeling happy. It induces a euphoric high that improves the mood as it continues to clear the mind at the onset. However, it will take some time to settle hence users should consume the bud in moderation. Otherwise, its THC levels of 18% to 20% can turn a pleasant high into an overwhelming cerebral hit paired with a couch lock.

Users feel a low rumble as the high persists. After all, although subtle, the stimulating head high can wake the appetite. Having snacks nearby is always a good idea as it is convenient. Popping off to the kitchen may take some time or veer enthusiasts away from fully enjoying the depth of Indica effects.

Eventually, a tingling sensation around the temples begins to intensify. It trickles down to the tips of the toes, passing through the muscles as a buzz of relaxation. In all likelihood, one will want to lounge around the couch. Regardless of the dosage, it is likely that the comedown will end up in sedation. Because of this, the strain is best reserved for evening use for a night of tranquilizing sleep.

Butter OG is an aromatic strain that entices the senses with its buttery overtones. Meanwhile, its sweet fruity note provide it with a tropical undertones. Crushed and combusted, the buds release a a woody smoke reminiscent of sandalwood.

One of Butter OG’s most distinct features is its smoke which is quite smooth. It has a buttery overtone that enhance the fruity undertone. Complementing its tropical hint is a subtle sweetness which develops into a flavorful wood on the exhale.

It is not uncommon for users to experience red eyes and a cottonmouth. Although mild and barely noticeable, growers may experience discomfort especially as it can be accompanied by dizziness as the dryness persists. Users with low tolerance to Butter OG’s cannabinoids should down a few glasses of water throughout the day. Avoiding caffeine and alcohol will help mitigate the discomfort.

Butter OG is a heavily uplifting strain. It enhances the mood while clearing away negativity. At the same time, it has a calming quality that slows down the fast-paced anxiety that overwhelms the mind when triggered by one’s stressors in life. Hence, it can be used as a reprieve against stress as well as manage symptoms of mental health issues like depression or PTSD.

One of the best times to use the Indica-leaning strain is right before a meal. It stimulates the appetite and encourages users to eat meals heartily without interruption or guilt. Because of this, it is a great source of comfort for patients dealing with eating disorders like anorexia or cachexia.

Surging throughout the body is a soothing physical buzz that appeases various aches and pains. It eases the muscles and prevents it from uncontrollably contracting. As a result, it can work as an effective antispasmodic that eases muscle spasms. Like a sleep aid, the deeply relaxing buzz accompanies the mind and body as it slowly drifts off into a wave of euphoria. Users eventually fall into a deep, unencumbered slumber.

Butter OG is a true Indica. It is naturally short and sturdy. Its stalks, as well as branches, have a strong resistance to the cool weather of the north and its strong winds. However, this does not guarantee an easy grow.

Its availability only as a clone and not as seed makes it a sensitive plant. While cultivating its roots, it is essential that growers monitor its performance as well as temperature and humidity levels. An imbalance in the two can lead to a stunt in its growth or, worst, the plant’s death. Hence, it may not be a good strain for beginners to grow.

With that said, once the plant has grown its roots, it becomes easier to manage. It becomes less sensitive as its stalks and branches thicken. More importantly, because it absorbs nutrients better, it enhances bud production. Growers can supplement it with the Sea of Green technique to further improve yields. Thinning it out through either pruning or trimming will also prevent it from rotting due to high levels of humidity or moisture that has not dried out properly.

If one prefers to grow Butter OG outdoors, it is best to cultivate plant inside until it grow its roots. Afterwards, growers can transplant it in either a garden or farm. Providing it with protection in case of protection weather.

Indoors, Butter OG has a short flowering period of 7 to 9 weeks. At harvest, it is expected to produce between 10 to 12 ounces of buds per square meter.

Butter OG flowers from the last few days of September to the second or third week of October. Growers can expect at least 12 ounces of buds per plant.

Have you ever smoked or grown your own Butter OG? Please let me know what you think about this marijuana strain in the comments below.