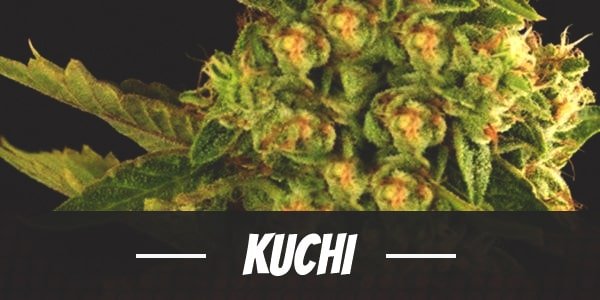 Both California and the UK are famous for producing spectacular strains, among which OG Kush and Cheese are the most notable. Almost all West Coast varieties trace its origins to the former while the latter achieved worldwide fame for its interesting flavors.

In time, combining these legends became the goal of Devil’s Harvest Seeds Company. Their effort was definitely not for naught as their novel endeavors resulted in the creation of the Kuchi.

A true delight to the senses, the Indica-dominant herb deliciously blends the flavors of cheese and Kush. At up to 22% THC, it also matches the potency and psychedelic effects of its predecessors. In fact, it even won 1st place during the 2013 Mallorcannabis Cup.

But, what truly makes Kuchi shine is its versatility. Though its use is presumably recreational, many medical users turn to the strain for its pharmacological benefits.

In a minute or two following the first puff, Kuchi delivers a clearheaded high that eradicates all negatives thoughts. The unclouded mind not only brightens the mood, it brings out one’s innate sense of happiness and contentment.

For the everyday user, the upbeat disposition is a huge advantage – especially at work, where much-needed creative juices can easily dry out. A clearer head helps profound thoughts and innovative solutions flow better from the mind to the drawing board.

With a renewed perspective, locking on tasks for long periods of time is easier. Food will have to be prepared ahead of time, though. Doing so will keep one from getting distracted as well as replenish all the spent energy during brainstorming sessions.

Intensifying in the background is a creeping Indica high. From the temples, it sends a barely noticeable buzz that continuously builds up after each wave. By the time users notice the soothing sensation, the heaviness will have spread throughout the limbs and the muscles, catching them off-guard.

Once the sedative effects kick in, the likelihood of falling into a deep unencumbered slumber is higher. For this reason, it is best to toke Kuchi in the late afternoon or at least three hours before bedtime.

Kuchi’s fragrance definitely grabs attention. For one, it has the enticing fruity profile of OG Kush albeit a little more exotic due to the addition of Cheese. Combusting the bud brings out its tropical vibe with rich milky and earthy undertones.

An acquired taste, Kuchi perfectly blends together the tangy flavors of lemon and citrus with hints of sweet, delectable cheese. On the exhale, it leaves a surprising but refreshing aftertaste of pine.

Marijuana’s chemical compounds usually interfere with the production of moisture in the tear ducts and salivary glands. As such, it is not surprising for users to feel their eyes redden and their mouths constrict with dryness. A glass of water before and after the session should do the trick though.

A rare but possible reaction to smoking Kuchi is anxiousness. It can also cause some to feel a little paranoid. The former is often the result of being uneasy even before the first hit. Meanwhile, the latter is caused by toking too much in a short amount of time. What truly helps with such symptoms is pacing and moderation.

Because of its happily relaxing buzz, Kuchi is great at mitigating problems that center on the mind and body. For example, the strain is widely used as a mood-enhancer to keep depression at bay. In a similar manner, it can also provide comfort to patients with PTSD such as veterans and victims of abuse.

Kuch is also used as a stress reliever. And, with its analgesic properties, the hybrid induces a soothing body buzz that pairs well with the initial mental onset. Together, they relax the user by removing any unwanted tension. More importantly, the reinvigorating effects get rid of chronic pain, headaches, and fatigue.

Not only has Devil’s Harvest Seeds Company made Kuchi publicly available, it has also released its seeds in its feminized form. By and large, female seeds are easier to grow than regular ones. Besides not having to throw away 50% of the batch, it assures users of resin-filled calyxes so one will only have to focus on caring for their plant.

A short and sturdy plant, Kuchi performs well regardless of its growing area. In fact, although the plant prefers warm environments, it has no problem being exposed to dipping temperatures. However, this does not guarantee an easy grow. Commercial in nature, the herb requires the expertise of a seasoned grower. For those that are looking to get the most out of the strain, using the SOG (Sea of Green) method the way to go. This method saves time and maximizes yields.

For fuller flavors, breeders may choose to harvest their buds earlier. But prolonging the flowering period is just as fine since it raises THC levels.

In well-maintained indoor environments, each square meter yields up to 12 ounces of buds once the flowering period of 9 to 10 weeks has passed.

In the northern hemisphere, Kuchi flowers by the second or third week of October. Countries with ample sunlight, one that mimics the 12/12 light cycle of a greenhouse, can expect buds the first week of the same month. Regardless, each healthy plant produces more than 10 ounces of trichome frosted goodness.

Have you ever smoked or grown your own Kuchi? Please let me know what you think about this marijuana strain in the comments below.