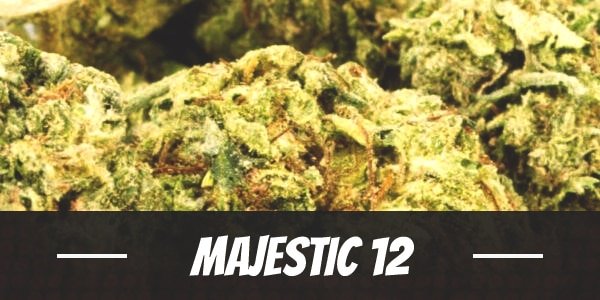 Majestic 12 is a hybrid strain, which owes its name to the Majestic 12 or MJ-12 entity that appears in many conspiracy theories involving aliens and UFOs. The purported organization was supposedly created in the 1940s by an executive order from the president and is made up of high government officials, military leaders, and a secret group of scientists. Of course, there is little to no evidence that would prove its existence.

Still, this name is apt for a strain in the cannabis industry named Majestic 12. Its euphoric cerebral high takes the mind to the clouds – a trait it gets from Space Queen. The sweet-smelling buds produce a trippy high upon combustion and consumption. Obama Kush, on the other hand, is a stimulating Indica that delivers a rush of energy throughout the mind and body. In spite of this, it has a powerful physical end that likely ends in a sleepy sedation.

Majestic 12, itself, has a stimulating head high with a trippy aspect. It is perfect as a daytime strain that could be used recreationally or as a wake-and-bake strain. Its effects are also worthwhile as a source of therapeutic relief. Not only does it improve the mood, but also relaxes users from pain and aches.

Majestic 12 is a wonderful recreational strain. It delivers a euphoric head high that uplifts the mood, putting one in an upbeat disposition. Some giggles may arise especially when around like-minded friends who know how to have a good time.

Casual users will find that it is an excellent wake and bake companion. In low dosages, both the clarity and upbeat disposition keep one focused and intently working on tasks until its completion. Moreover, it inspires users with its creative energy.

Eventually, after an hour or two, a tingling buzz settles in the limbs. It relieves the body of aches and pain while also soothing the muscles. In spite of its intensity, it does not leave users feeling heavy and neither does it lock one to the couch. The relaxation, although deep, keep one light on the feet while performing physical tasks.

Majestic 12 is a pungent strain in that it produces a dank, sour smell with spicy undertones. It could make a sensitive nose itch, but hints of berry and grape come afterward. A sweet but earthy aroma gradually develops as the buds are broken combusted. Users may also notice a floral tinge.

Upon consumption, a blend of spices and freshly picked flowers take over the palate. It is mainly sweet but the subtle sourness of its berry and grape flavors eventually coat the tongue. On the exhale, it leaves an earthy aftertaste.

We don’t currently sell Majestic 12 seeds. Check out other hybrid seeds in our marijuana seed bank.

A cottonmouth is to be expected while toking Majestic 12. After all, it has cannabinoids that inhibit the production of moisture. At times, users may also experience red, irritated eyes or dizziness. The discomfort is usually mild though and rarely warrants panic or worry so long as one stays hydrated.

It is not wrong to assume that Majestic 12 may have been created specifically for recreational enthusiasts. After all, it does contain high levels of THC which induces many of its prized effects. But this does not limit its ability to provide comfort to patients. The psychoactive compound contains many medicinal properties that work hand-in-hand with its terpenes as well as other cannabinoids such as its up to 1% CBD.

The uplifting high it delivers provides comfort to people dealing with stress and psychological distress. It clears away negativity while calming an overwhelming dread or worry. In its place, there is a positive outlook that enhances the mood and inspires an upbeat disposition. As such, it works effectively as an anti-depressant, anxiolytic, and antipsychotic.

Its analgesic and anti-inflammatory properties, on the other hand, address a myriad of physical afflictions. This includes pains and aches such as arthritis, swelling, and headaches. Its subtle invigoration, meanwhile, eliminates traces of muscle soreness or fatigue.

Majestic 12 exhibits various hybrid qualities. It has a relatively tall structure and is quite bushy overall. Moreover, it adapts quickly to various environments which makes it suitable to indoor and outdoor growing. The easy to grow strain is also immune to various pests and diseases and, as such, could be for beginners.

It necessitates a bit of trimming. As it grows, its foliage becomes dense enough to potentially inhibit light distribution and air circulation in the lower nodes. Thinning out the plant, as well as a proficient ventilation system, will solve the problem. It also tends to be very aromatic, filling the room with its fragrance. Installing a carbon filter is not necessary as its blend of sweet berries and earth is often pleasant, but growers may still do so to prevent nosy neighbors from asking questions.

Upon reaching the end of the flowering period, the flowers become denser which give it the appearance of small to medium-sized popcorns. It usually has an olive hue with splashes of light green. Exposing it to colder weather or environment leads to the development of purple hue with deeper violets as temperatures go lower. Perfectly contrasting it are amber hairs and orange pistils. It is coated in trichomes that blend together its colors seamlessly while giving it a subtle glow.

Majestic 12 can flower as short as 8 weeks or as long as 10 weeks depending upon the conditions of the grow area. Regardless, growers can expect between 12 to 14 ounces of buds per square meter from the hybrid.

Growers can check for flowers as early as the second or third week of October. However, giving it an extra week will allow it to produce even more. Typically, one can harvest at least 14 ounces of buds per plant.

What is the Majestic 12 strain yield?

Majestic 12 yields 12 to 14 ounces per square meter indoors and 14 ounces or more per plant outdoors.

How much THC does Majestic 12 have?

What are the origins of the Majestic 12 strain?

Majestic 12 was created from a cross between Space Queen and Obama OG.

Have you ever smoked or grown your own Majestic 12? Please let me know what you think about this marijuana strain in the comments below.