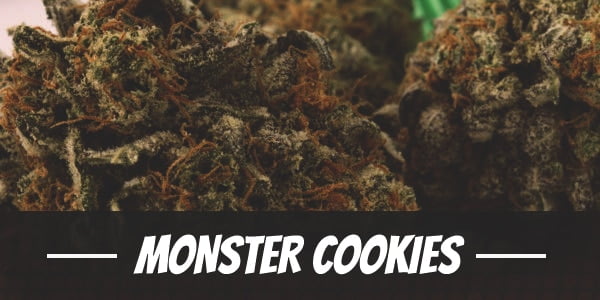 Monster Cookies did not take its name from any delicacy or the lovable Sesame Street character. Instead, it was a play on Girl Scout Cookies (GSC), one of its parent strains. It may also not produce monster-size buds, but its heavy-Indica effects are nothing short of monstrosity.

GSC, as many users have come to know, is not one that is lacking in potency. In fact, it has won several Cannabis Cups because of its insane THC. In some ways, Monster Cookies inherited its mind-bending mental high but only to a small degree.

Like GSC, Granddaddy Purple boast of a stimulating mental high followed by intense relaxation. Its influence on Monster Cookies, though, is more significant as attested by the heavy Indica heritage, flavors, and even its appearance.

Unfortunately, the plant is clone-only. No one even knows who the original breeder was. It is also not to be confused with another hybrid that goes by the same name developed by Greenpoint Seeds. It may very well be an attempt to have a plant that is closest to matching the original Monster Cookies by crossing GSC with Yeti OG.

Describing the effects of Monster Cookies as nothing short of monstrosity is not an exaggeration. Packing up to 21% THC, it slams hard into the body in due time. At its onset though, it begins with a euphoric buzz that is both uplifting as well as invigorating. Although the strain is 80% Indica, its mental high is surprisingly pronounced. No doubt, this is an apparent quality of GSC.

It does take a while before the Indica traits begin to manifest. Once it does, it starts with a warm buzz ebbing into the body. The relaxing sensation can indeed put users not only at ease but also in utter bliss. As the numbing effects spread, most users are likely to stay glued to the couch.

Like others, the early onset of the mental high is often one that clears the head. After succumbing to the full effects of Monster Cookies, most users end feeling spacey with an almost meditative quality while merely savoring the incredible pleasant feeling.

The influence of Granddaddy Purple is unmistakable with the pungent scent it emits. Boasting of the sweet aroma of grape blending with an earthy smell, Monster Cookies is one of the best smelling strains ever. Fans of Blueberry should find it to be as enticing.

To have a fragrant aroma and not to match it with a captivating flavor would be a shame. Monster Cookies does not disappoint though. Each toke in itself is quite an experience for the palate with its distinct berry taste with a sweet note and earthy aftertaste.

Experiencing dry mouth and dry eyes is a common occurrence when using marijuana and not just Monster Cookies. At times, it may also cause a mild headache or dizziness. Also, some people are more susceptible to feeling paranoid.

As a general rule, use marijuana conservatively especially when a strain is as potent as Monster Cookies. The adverse effects described can occur even in moderate use, but overindulging may also make the symptoms more pronounced. At any rate, it is often too mild and ignored by most people.

As the strain delivers an uplifting mind and body high, Monster Cookies can help wipe out stress. As it leaves users feeling happy, it dramatically benefits people suffering from depression and related illnesses or conditions.

The numbing Indica traits, aside from inducing body relaxation, also comes with significant pharmacological benefits. Because it helps get rid of tension in the body as well as soothe aching muscles, it can lessen or even eliminate chronic pains.

Most people who use this strain ends up sleeping through the night. As such, it is an excellent choice as well for people who need a little help in getting quality sleep.

Being clone-only, getting a clipping to cultivate an identical plant is almost impossible. For those who do manage to, there is the choice of planting it indoors or outdoors. In either environment, Monster Cookies should thrive well.

It features tightly-packed medium-sized buds with white trichomes. The forest green leaves are another matter. By exposing the plant to colder temperature shortly before the bloom stage, it causes a reaction that results in deep blue and purple hues forming on the edge of the leaves.

Growing Monster Cookies indoors, the plant has a flowering period that lasts 8 to 9 weeks. It offers a decent yield of up to 12 ounces per square meter.

The plant should thrive well in a dry and warm climate. However, it is quite tolerant of a colder environment. It should transition to the flowering stage during the last days of September. One ready for harvest, growers can expect each plant to produce at least 12 ounces of buds.

Have you ever smoked or grown your own Monster Cookies? Please let me know what you think about this marijuana strain in the comments below.